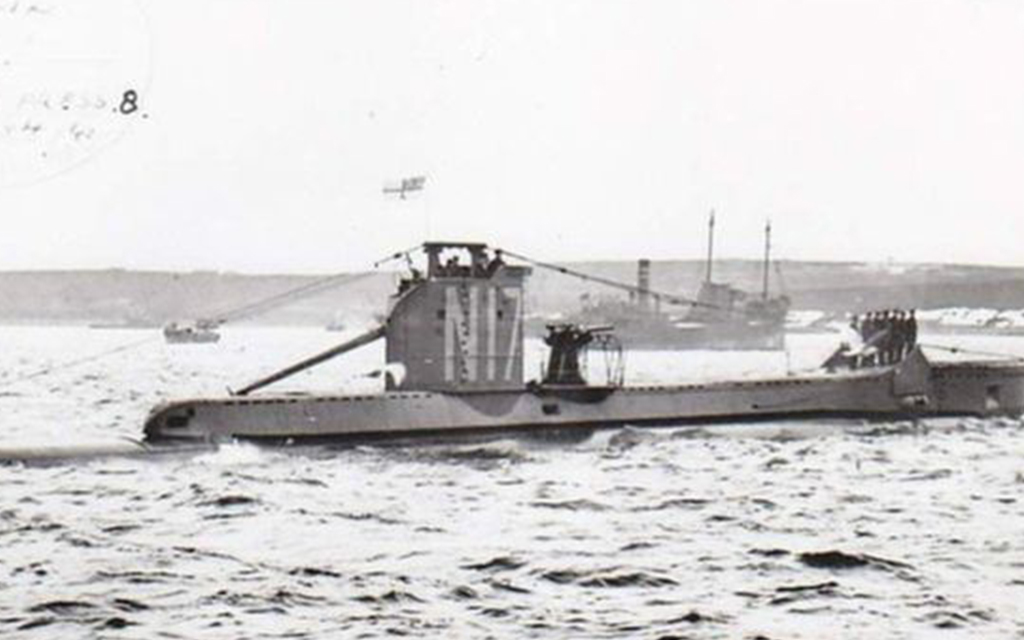 A marine archaeology survey team from the University of Malta, working in co-operation with the Superintendence of Cultural Heritage and an international project team, has located the wreck of the British WW2 submarine HMS Urge (N17) off the coast of Malta.

Professor Timmy Gambin, from the University’s Department of Classics & Archaeology, led the survey team, whose discovery finally resolves the question of how one of Britain's most successful WW2 submarines was lost. The search team consisted of maritime archaeology staff and students from the University of Malta, robotics students from Harvey Mudd College in the USA, and a number of sub-contracted vessels.

HMS Urge earned her renown in the second world war due to her successful attacks on many enemy vessels and special operations work with the British commandos and Secret Intelligence Service. Her disappearance in 1942 has long been a mystery.

Results from this search have established beyond doubt that on 27th April 1942 HMS Urge struck a German mine when leaving the British submarine base at the height of the siege of Malta by German and Italian forces in WW2. The wreck of the submarine stands upright and proud at a depth of 130m on the seabed, her deck gun facing forward.

The submarine sank carrying her crew of 32, as well as 11 other naval personnel and a journalist, none of whom survived. The damage caused by the explosion of the mine caused the submarine to sink rapidly, the speed of descent and impact on the sea bed is evident in imagery collected. The wreck site is a war grave and will be protected under Maltese, British and international legislation. 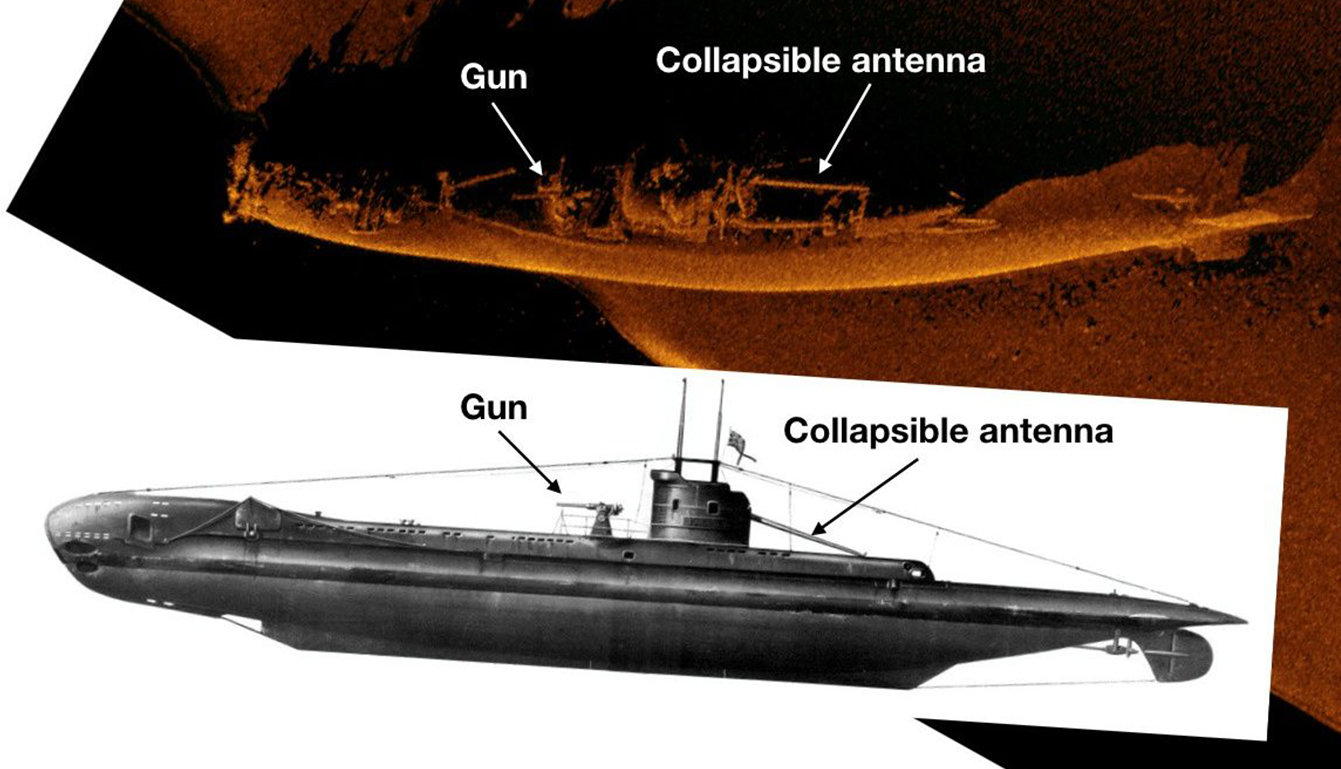 HMS Urge stands upright at a depth of 130m on the seabed, her deck gun facing forward

In this comparison, you can see HMS Urge as she stands today on the seabed alongside an image of her before she was lost.

HMS Urge was a U class submarine built by Vickers Armstrong in Barrow-in-Furness and launched in 1940. She conducted two patrols off Norway before heading to the Mediterranean. On her way to the Mediterranean, she deprived German U boats of vital fuel by sinking a large tanker in the Bay of Biscay. In December 1941 she torpedoed and damaged the enemy battleship the Vittorio Veneto, putting one of the most powerful ships in the Italian Navy out of action at a critical time in the War. On 1 April 1942 HMS Urge torpedoed and sank the Italian 6” gun cruiser the Bande Nere, whose wreck was discovered in March this year lying at a depth of more than 1.5km below the sea bed off Stromboli in Italy. 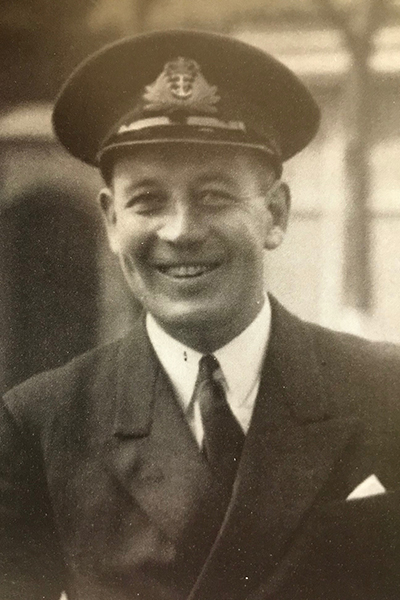 The submarine had four torpedo tubes and a 12-pounder deck gun and was 196 feet in length with a beam of just over 16 feet. Her crew was highly decorated, and the Royal Navy's Commander in Chief Mediterranean communicated to the Admiralty that "the loss of this outstanding submarine and her commanding officer is much to be regretted.” After WW2 a building at the Royal Navy's submarine headquarters at HMS Dolphin was named after HMS Urge, followed by another named after her Captain, Lieutenant Commander Tomkinson.

The distinctive features of HMS Urge have been identified by comparing strikingly clear images of the wreck with wartime photographs. Spellbinding images of the submarine show her standing defiant after more than 77 years underwater, accommodating a multitude of marine life whilst maintaining the vigilant stance for which she was so widely acclaimed. The bow of the submarine lies buried in the seabed following the impact of her descent from the surface.

The search team was working for a research project led by Professor Gambin, Francis Dickinson and Platon Alexiades. Francis Dickinson is a grandson of HMS Urge’s commanding officer, Lieutenant Commander Tomkinson, and provided information on HMS Urge and lead financial sponsorship of the project. Platon Alexiades, is an experienced naval researcher from Montreal, Canada with critical insight into relevant military records of WW2, who also sponsored the project. The sponsorship agreement was facilitated through the University’s Research and Innovation Trust.

My family have always wanted to know where HMS Urge and her gallant crew’s resting place is. Thanks to this project, we now know where and how this submarine was lost after achieving so much.

Having reviewed detailed images and materials relating to the discovery, the UK Ministry of Defence has agreed with the research project’s conclusion and officially recognised that the wreck discovered is that of HMS Urge.

Many of the crew of HMS Urge formed bonds with the people of Malta, including one crew member who married a Maltese bride. Lieutenant Commander Tomkinson’s daughter, Bridget Dickinson, hopes that families of those lost will be able to join a commemoration in Malta next year.

The powerful image of this seemingly undaunted wreck reflects the courage of those who sailed in her, as well as the enduring alliance of HMS Urge with the island of Malta. It will forever be a part of the history of the Royal Navy and of Malta.

A popular short-haul destination for UK divers, Malta is affordable, accessible and has some of the best diving in the Med. Find out more at MaltaUK.com.

Images courtesy of F. Dickinson and the Malta Tourism Authority

Fast-track your scuba diving training and have a great holiday as well.