The science of jellyfish stings 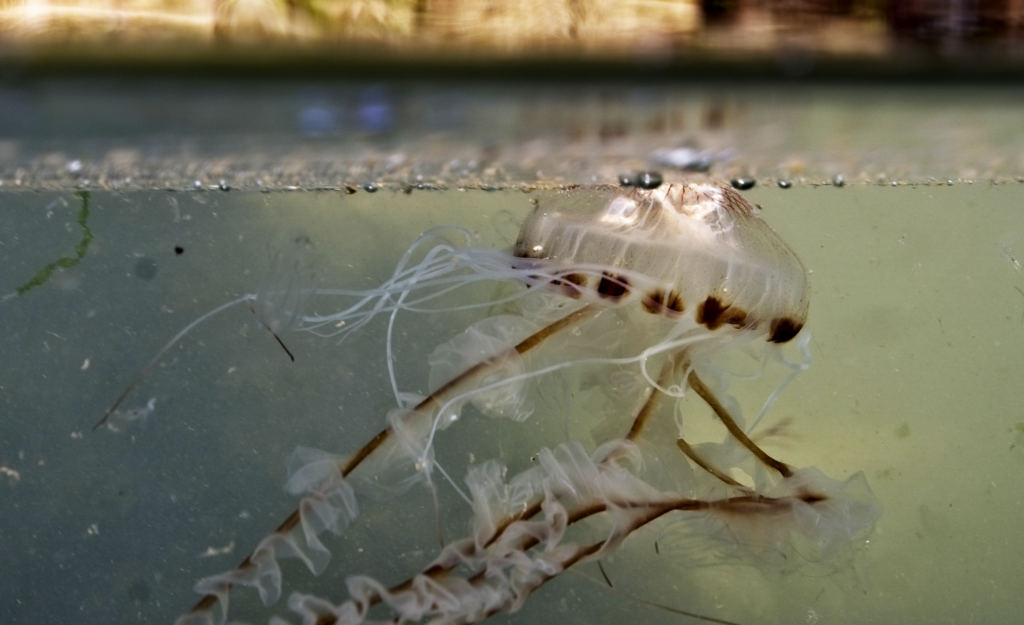 Where skin is exposed to water, the UK diver is at risk of jellyfish stings. Michelle Haywood investigates the biological forces that power this predatory weapon.

Every diver in British waters will encounter lion’s mane jellyfish (Cyanea capillata) at some point in their dives. Lion’s mane are the largest jellyfish known and can have tentacles extending more than 30 metres from the bell, which itself can be up to a metre in size. Tentacles are easily broken off, especially when they snag on shot lines, so it’s not unusual to find the tentacles and not see the jellyfish itself.

Jellyfish tentacles are covered with stinging cells called nematocysts. Nematocysts are little capsules on the tentacle surface. They have elastic walls and a small operculum that acts as a lid. Inside the capsule is a protein tube with a stylet with spiked barbs like a fish hook on the end. This protein tube contains the venom and is attached to a coil of threads. Before the nematocyst is triggered, these threads hold the barbed head in place.

Nematocysts can be triggered by touch. The operculum pops open and the dart is shot out, unravelling the coiled threads. As the whole system is stored with considerable pressure, the barbs are capable of penetrating even crustacean cuticles. Studying nematocysts firing with high-speed cameras (over a million frames per second!) shows that discharge of nematocysts can fully deploy in as little as 700 nanoseconds or 0.0007 of a second. Although the mass of the nematocyst is very small (around 1 nanogramme or 0.000001 of a gramme), the pressure at the site of impact is more than 7 Gigapascals, which equates to the same impact as some bullets. The energy for the firing comes from the collagen and proteins in the capsule wall, which act as a molecular spring.

The barbed head sticks into the prey like a microscopic needle and the venom is injected into the prey (or the unsuspecting diver). Jellyfish obviously aren’t intending to sting divers, most of whom are far too big to be digested anyway. The venom is intended to paralyse and kill their small prey; the tentacles will then move the prey to the mouth and the nematocysts will reset. Unsuspecting divers brushing against the nematocysts will trigger them to fire, and exposed human skin is easily penetrated.

The venom needs to be fast-acting; venom needs to stop the prey from escaping. The exact composition of jellyfish venom varies for each species. It is a cocktail of haemolytic (attack blood cells), neurotoxic (attacks nerve cells) and cytotoxic (cell-killing) proteins and non-protein toxins. That being said, some jellyfish venom has been investigated for anti-cancer and anti-inflammatory activity. Other components have shown promise as pain killers. However, elucidating which protein out of the cocktail has a therapeutic function is difficult. There are hundreds of possibilities to test. Jellyfish aren’t the only toxic organism from which we look for new medicines; similar studies have been carried out with snake venom. 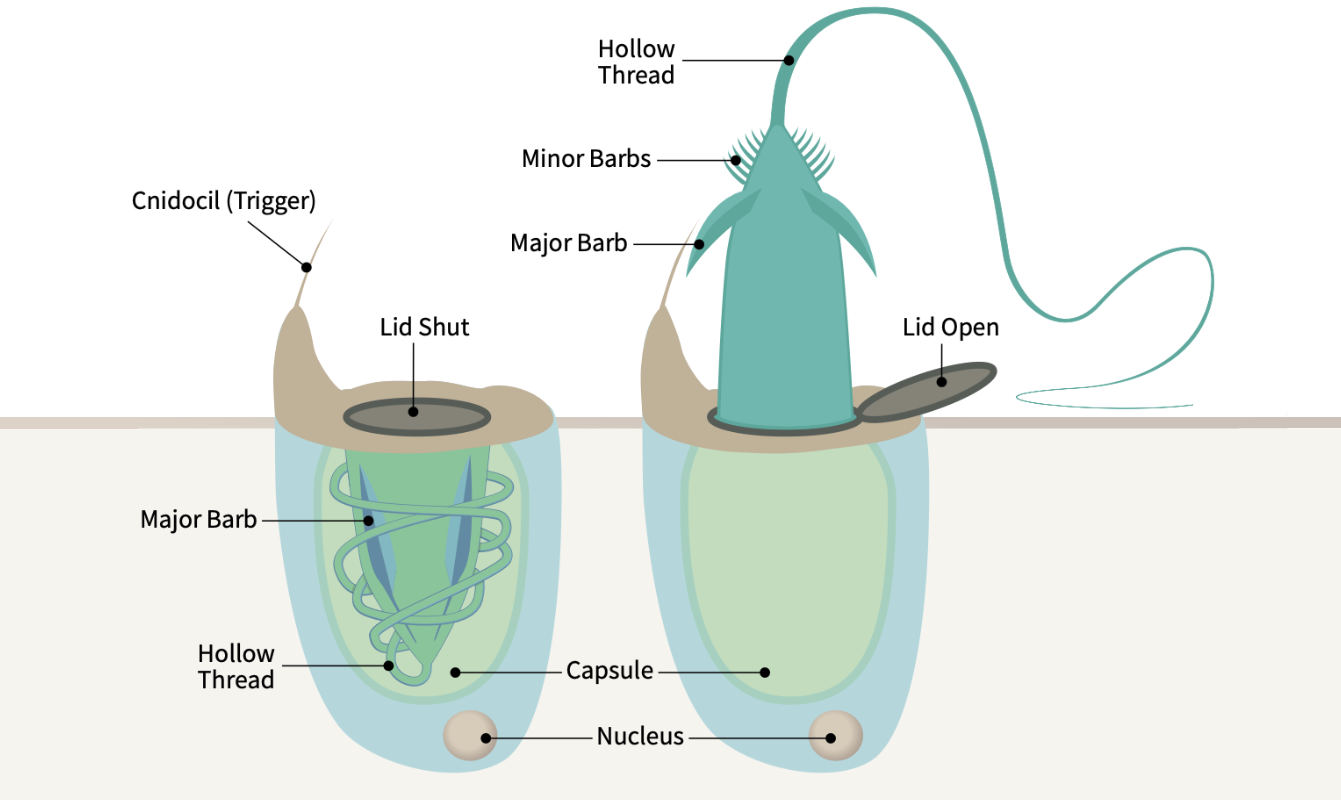 For most divers, the sting from a jellyfish is minor. There is a small amount of localised pain, maybe some itching and skin irritation and the possibility of blisters or wheals. However, for a small minority, there may be progression to nausea, vomiting and breathing difficulties. The original identification of anaphylaxis came from the study that looked at dogs being stung by the Portuguese Man-O’-War (Physalia physalis). The scientists discovered that a second injection of the same venom didn’t provoke protection (phylaxis) but actually was more toxic than the first exposure, so they christened the effect anaphylaxis (the opposite of phylaxis). They won the Nobel Prize in Medicine.

Once the venom has been injected into the poor diver, the diver’s immune system swings into action. The immune system recognises the complex mixture of venom components and acts to compartmentalise and destroy the foreign material. There are so many different components in venom that this reaction involves pretty much every immune cell type and a number of chemical messenger molecules. This explains the immediate itching and skin irritation, as white blood cells race to the scene of the venom injection.

The redness occurs as the blood vessels become leaky and allow fluid into the affected tissue. Toxins in the venom activate pain receptors in the skin. Some of the barbs may be left in the skin and that chitinous material creates a sustained reaction.

In some people, all these reactions can become widespread or systemic, leading to more serious effects. As with all immune reactions, subsequent exposures may provoke a faster and bigger response that occurs away from the original skin lesions. This suggests that in some people the immune response to the toxin works slightly differently. But until and unless it happens to you, you’ll never know!