Tale of the tusk 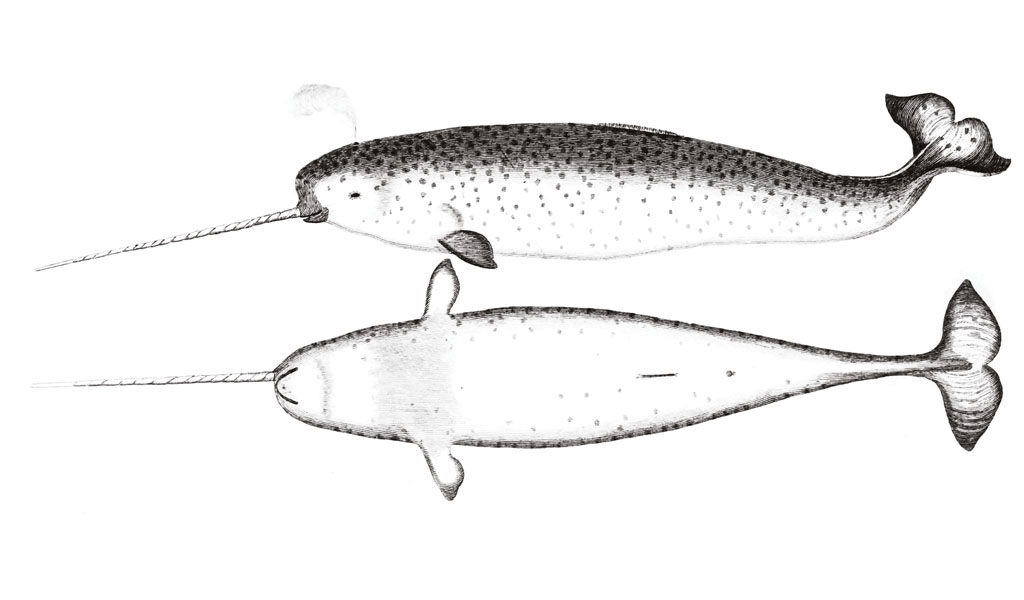 Michelle Haywood reports on the mysterious narwhal, after events last year in which its tusks were used as spears to subdue an attacker.

Narwhals were suddenly back in the public eye when their magical tusks hit the headlines in November 2019 after a knife attack spilt out of the Fishmongers’ Hall onto London Bridge. Brave bystanders used two narwhal tusks to fend off the armed attacker, leading to remarkable scenes. The narwhal tusks in question were on display either side of the entrance to the Hall. The whole incident led to media reports about the “unicorn of the sea”, but what exactly are the tusks and why do narwhals have them?

Narwhals are members of the toothed whales (Odontoceti) group, which is a bit ironic as they don’t actually have any teeth inside their mouths. Narwhals have a fairly restricted diet, mostly halibut, cod, cuttlefish, shrimp and squid. They swim close to their prey and then suck it with considerable force into their mouths and swallow it down whole. It’s a strategy that must work because narwhals are estimated to live for around 150 years and known to grow to up to five metres long, not counting their tusks.

Narwhal tusks aren’t like rhino horns. Rhino horns are made from keratin, a protein found in hair. narwhal tusks are their canine teeth that grow out through the upper lip. Most commonly it’s the left upper canine, but occasionally the right upper canine grows out too, thus some narwhals may have two tusks. Tusks are mostly seen in male narwhals but around 15 per cent of females grow them too, though the female tusks tend to be much smaller than the male ones. Male tusks can grow up to three metres long.

Narwhals are unique in the animal world because their tusks grow in a straight line. Think about walrus or elephants – they have gently curving tusks. If you look closely at a narwhal tusk you will see that it is structured in a corkscrew design turning to the left. Although nature tends to like symmetry, if a narwhal grows two tusks they both spiral in the same way round to the left. Narwhal tusks are also flexible and able to bend about 30cm in any direction before breaking.

But what are the tusks actually for? There has been speculation that they were for hunting, competing for mates (do narwhals duel?), spearing through ice or communicating. The evidence for the real reason that narwhals have evolved to have tusks lies in understanding the structure of the modified tooth that makes up the tusk. Let’s consider our own teeth first, there is a hard-wearing layer of enamel on the outside. Underneath the enamel is a layer of dentin and cementum, and in the centre is the pulp with blood vessels and nerves. We don’t generally feel our teeth much except when there’s a problem, chips in the enamel or decay that allow the nerves to be stimulated and give us toothache.

Narwhal tusks are structured in entirely the opposite way. The soft sensitive part is on the outside and the hard, dense part makes up the middle of the tusk. This means that on the outside there are millions of tiny pores with nerve cells. It isn’t hard to extrapolate that narwhal tusks probably aren’t used for combat. Indeed, although narwhals have been observed to touch tusks, it was not in a violent way.

The narwhal tusk is acting like a sensor, with all the nerve endings connecting to the brain and allowing the animal to sense the characteristics of the water it is travelling through. Research has shown that narwhal tusks can detect the temperature, water pressure and salinity of the water they are travelling through and maybe also particle gradients and motion too. It has also been suggested that the tusk may be able to detect barometric pressure above the water’s surface. This probably allows narwhals to sense and navigate the waters near the ice floes in which they prefer to feed. narwhals have also been observed to hit fish with their tusks and stun them. It seems that stunning your target with a narwhal tusk is not such a novel idea after all.

This column was originally published in SCUBA magazine, Issue 100 March 2020.