Strange beasts and where to swim with them 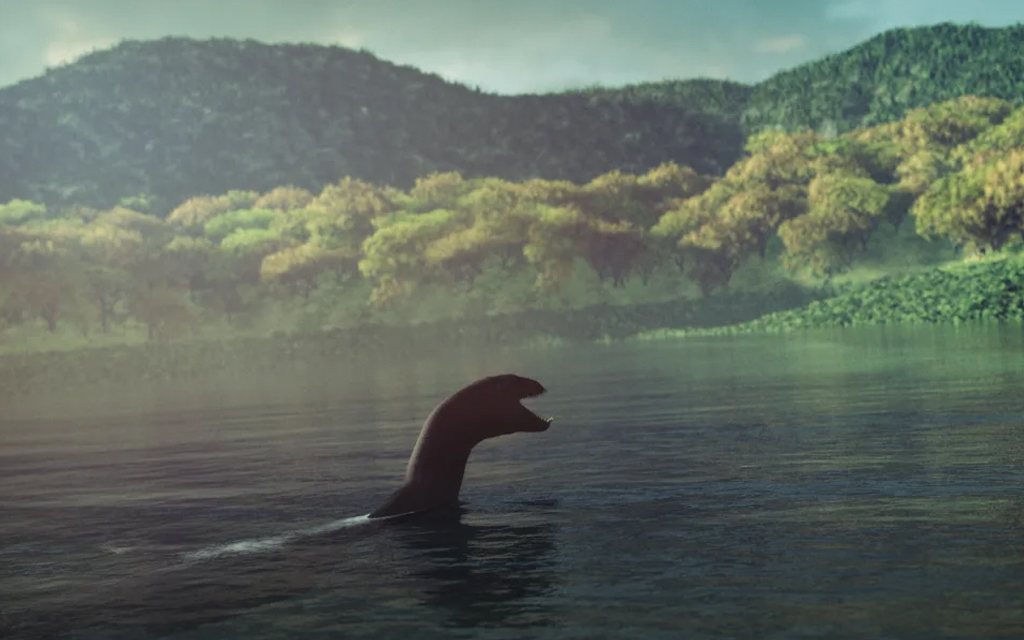 Andy Torbet usually deals in cold reality, but this month he dips a fin into a world of legend, and the mythic creatures of British folk tales 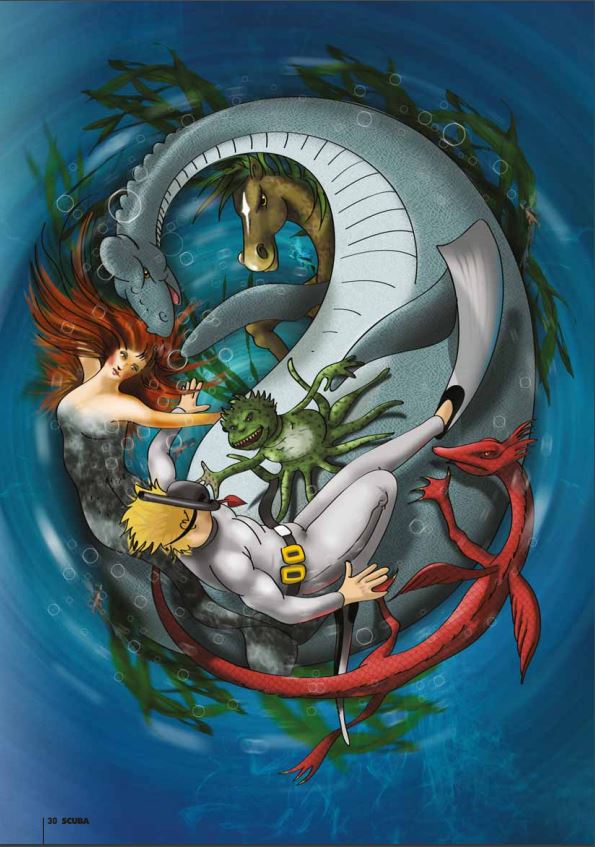 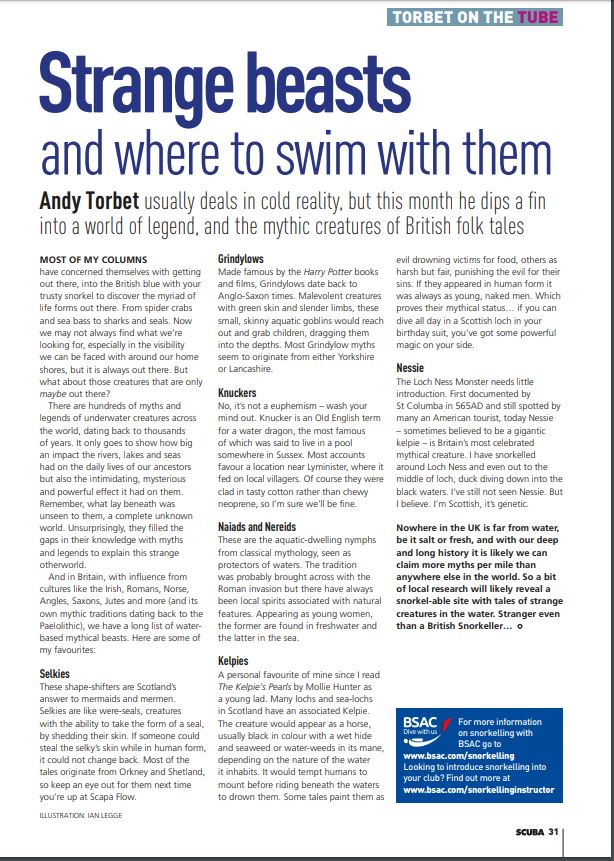 Most of my columns have concerned themselves with getting out there, into the British blue with your trusty snorkel to discover the myriad of life forms out there. From spider crabs and sea bass to sharks and seals. Now we may not always find what we’re looking for, especially in the visibility we can be faced with around our home shores, but it is always out there. But what about those creatures that are only maybe out there?

There are hundreds of myths and legends of underwater creatures across the world, dating back to thousands of years. It only goes to show how big an impact the rivers, lakes and seas had on the daily lives of our ancestors but also the intimidating, mysterious and powerful effect it had on them. Remember, what lay beneath was unseen to them, a completely unknown world. Unsurprisingly, they filled the gaps in their knowledge with myths and legends to explain this strange otherworld.

And in Britain, with influence from cultures like the Irish, Romans, Norse, Angles, Saxons, Jutes and more (and its own mythic traditions dating back to the Palaeolithic), we have a long list of waterbased mythical beasts. Here are some of my favourites:

These shape-shifters are Scotland’s answer to mermaids and mermen. Selkies are like were-seals, creatures with the ability to take the form of a seal, by shedding their skin. If someone could steal the selkie's skin while in human form, it could not change back. Most of the tales originate from Orkney and Shetland, so keep an eye out for them next time you’re up at Scapa Flow.

Made famous by the Harry Potter books and films, Grindylows date back to Anglo-Saxon times. Malevolent creatures with green skin and slender limbs, these small, skinny aquatic goblins would reach out and grab children, dragging them into the depths. Most Grindylow myths seem to originate from either Yorkshire or Lancashire.

No, it’s not a euphemism – wash your mind out. Knucker is an Old English term for a water dragon, the most famous of which was said to live in a pool somewhere in Sussex. Most accounts favour a location near Lyminister, where it fed on local villagers. Of course, they were clad in tasty cotton rather than chewy neoprene, so I’m sure we’ll be fine.

These are the aquatic-dwelling nymphs from classical mythology, seen as protectors of waters. The tradition was probably brought across with the Roman invasion but there have always been local spirits associated with natural features. Appearing as young women, the former are found in freshwater and the latter in the sea.

A personal favourite of mine since I read The Kelpie’s Pearls by Mollie Hunter as a young lad. Many lochs and sea-lochs in Scotland have an associated Kelpie. The creature would appear as a horse, usually black in colour with a wet hide and seaweed or water-weeds in its mane, depending on the nature of the water it inhabits. It would tempt humans to mount before riding beneath the waters to drown them. Some tales paint them as evil drowning victims for food, others as harsh but fair, punishing the evil for their sins. If they appeared in human form it was always as young, naked men. Which proves their mythical status… if you can dive all day in a Scottish loch in your birthday suit, you’ve got some powerful magic on your side.

The Loch Ness Monster needs little introduction. First documented by St Columba in 565AD and still spotted by many an American tourist, today Nessie – sometimes believed to be a gigantic kelpie – is Britain’s most celebrated mythical creature. I have snorkelled around Loch Ness and even out to the middle of the loch, duck diving down into the black waters. I’ve still not seen Nessie. But I believe. I’m Scottish, it’s genetic.

Nowhere in the UK is far from water, be it salt or fresh, and with our deep and long history it is likely we can claim more myths per mile than anywhere else in the world. So a bit of local research will likely reveal a snorkel-able site with tales of strange creatures in the water. Stranger even than a British Snorkeller…