Torbet on the Tube: Snorkel when the sun shines… 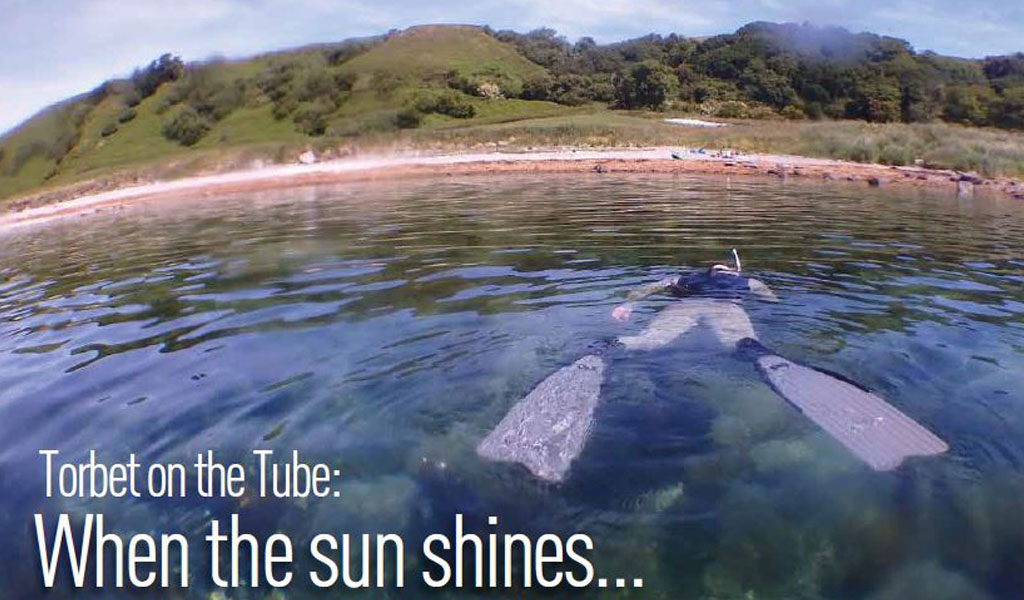 Andy Torbet heads back to one of his regular snorkelling haunts on Scotland’s west coast, and finds Bute’s answer to the Lembeh Strait.

The Isle of Bute lies just of the south west coast of Scotland. The ferry takes only 30 minutes and runs from a small port about 20 miles from the outskirts of Glasgow. It is incredibly accessible and over the past four years my family and I have gone to Bute three times. Each time I’ve taken my snorkelling kit. Each time I’ve braved the wind and rain, the waves and poor visibility, trying to get a decent dive in. Each time it has failed to live up to expectation. Each time has been in February.

Admittedly, February is not a traditional time to visit Bute but it has always been when I had some downtime; so we’ve seized the opportunity and braved the winter.

This year, however, we thought we’d try something radical – we’d go in summer! And just like before I packed my snorkel gear in among the paraphernalia that accompanies travel with two toddlers, and hoped to get some truly un-Scottish weather. For once, I was not disappointed.

We had an incredible week – I took advantage of the 50 metre walk to the sea from our cottage to get in every day. Now you’ll note I was snorkelling alone. This is not something I’d normally advocate but the location was a very sheltered bay with a flat calm sea and no noticeable tide or current. I was never more than about 30 metres off the shore and in more than two metres of water. It was about as benign as conditions can get.

I was also diving with a little positive buoyancy and could release the weight I had instantly. And to cap it off I had someone keeping an eye on me from shore. In fact, the conditions were so pleasant I did do a couple of buddy snorkels when I took my eldest son in for his first snorkelling experience. It was the first time he’s stuck his head underwater with a mask on and been able to actually see things. He was blown away. Yep, that’s one more of us to add to the Blue Army.

It also gave me the chance to experiment with a new camera system that I’ll be using for some future, solo filming projects. It’s not terribly technical but it’s worth trialling these things when you have the time to work out what works best and what the limitations are before you have to deploy them in action. It’s taking my ‘selfies’ to the next level. In fact, all the photos for this month’s column were taken by me… or at least by the camera on a self-timer.

Marine life around the shoreline

The life around the shoreline was limited to very small creatures and it initially looked barren. But like those famous ‘macro’ sites in Indonesia once you get your eye in you start to see the miniature world in all its glory. Shore crabs the size of 50 pence pieces, flatfish no bigger than your thumb and seasnails the size of a pinky nail.

The sun sent shafts of biblical light down onto the sand-patched pebble sea-bed and the visibility in places extended over 10 metres. The water at high tide got so warm I ditched my hood and gloves and wished I’d gone for the 5mm suit rather than the seven. It’s rare that I dive in the UK and complain about the heat.

I only really investigated the shoreline near our cottage on Ettrick Bay but on my return home I’ve studied the charts and think there is greater potential for better diving in the Southern point of the island. So we’ll be returning next year – in summer.

I often write in this column about the fact that we can, with some degree of effort, planning, compromising and good luck, dive all year round in the UK. That said… it really is so much better when the sun shines!

The image used for this month's online version is from SCUBA magazine.