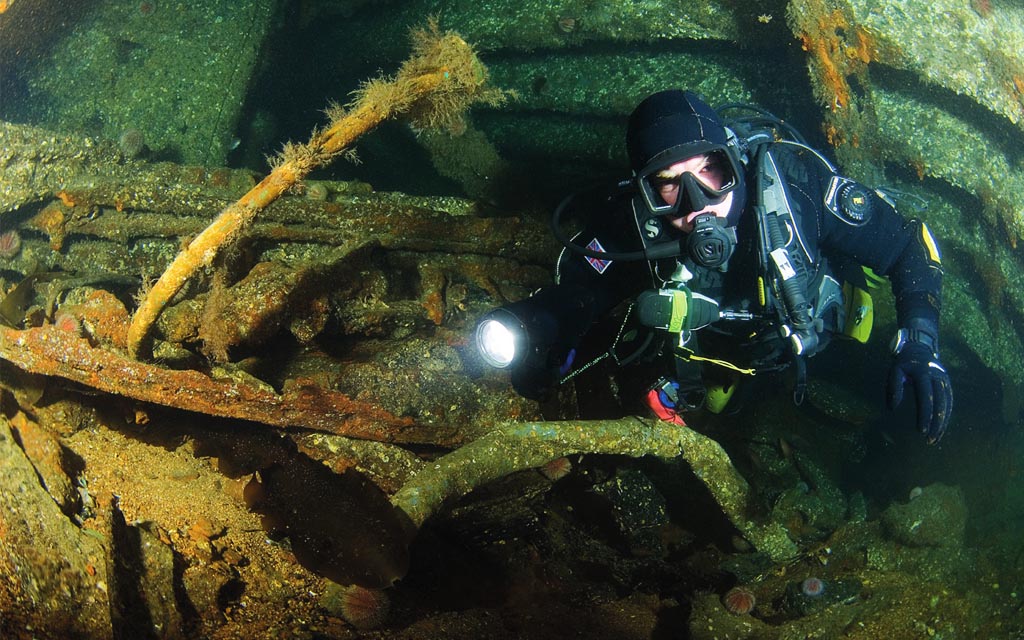 Jane Maddocks says much can be achieved by dive clubs surveying their ‘regular’ wreck dive, and offers advice on how to record its vital statistics.

‘Environment’ is a big word. If we ask 20 people what it means, we will probably get 26 ideas about what it is, and how it affects BSAC members. At the moment, lots of attention is focused on plastics and underwater litter. I have already talked briefly about taking litter off wrecks, the importance of not getting too task orientated, and making sure that you can safely tidy away what you need to take to the surface. It would be a great branch project to remove litter from the wrecks we dive into.

Wrecks are part of the marine environment. They are usually the result of something going horribly wrong. Their end is often violent, noisy, and can include substantial loss of life. After a time underwater, the noise and the violence are forgotten. They become quiet. In some cases, they become an underwater garden, in others a stark metal or wooden home to marine life in its many forms.

Wrecks change over time. They break up, through natural or man-made processes, pieces break off, guns topple over, and the rudder becomes part of the seabed – hard to see unless you know it is there. BSAC branches, schools, and centres are ideally placed to create small projects that record these changes year-on-year. These recorded changes would then be part of the story of the wreck and the divers who decided to get involved in the recording.

Sometimes the very word ‘project’ can put people off. But it doesn’t have to be a multi-national venture, involving hefty budgets and mass media involvement. Some years ago in the Solent, a BSAC branch wanted to identify a First World War shipwreck. They measured, photographed, recorded cargo, and checked the identities of ships sunk in the same action. They held two branch away-day weekends, involving diving, research, and barbecues.

Some members did the BSAC Wreck Diver Course and the Wreck Appreciation Course, while others delved into shipwreck directories. Two completed Nautical Archaeology Society courses. Still, others found three brass letters from her name board by looking around the scour pit. In the end, they confirmed her identity, using a combination of skills.

But more than that, they had fun, learnt stuff, used skills that they had acquired, and used their diving for a purpose. It was not big budget, but it was a project that gave their diving a bit of extra excitement.

Why should we record wrecks?

Wrecks are deteriorating all the time. We need to start recording what is there now, so changes can be monitored. It is a form of preservation by record. As BSAC members, we can make an impact by recording the wrecks we dive.

They are our ordinary bread and butter wrecks, of no great importance to the world perhaps... but you never know. Diver observation counts. Many of us dived the Arfon, only to find we had been diving ‘not the Arfon’ when an eagle-eyed diver found that the number of boilers was wrong. The genuine Arfon has since been found and protected.

If your branch has a much-dived wreck, this could be an opportunity to record it. At the least, you can record length; width across; depth of hull. Then note down propulsion, engines, or masts. Is it made from wood, metal, or both? Does it have guns? If the identity is known, then how did it sink and what is there now? Small cameras have made all the difference, so go ahead and get some footage. Then put it on YouTube.

Get some of your members qualified with Seasearch if they are not already, and record the species living on and in the wreck. Write a short report about what you have found and send it to me at jane.maddocks@bsac.com and I will make sure that it goes onto our site so that when you repeat the survey in the next few years, changes can be noted. It can be anonymous, but we can discuss that when your project comes in. Keep your eyes open for the relaunch of the Wreck Award. Your club wreck could be the winning entry for 2022.

I’m interested in doing a Try Dive (taster session), help me get started