Mildly moist, not our choice: dealing with drysuit repair 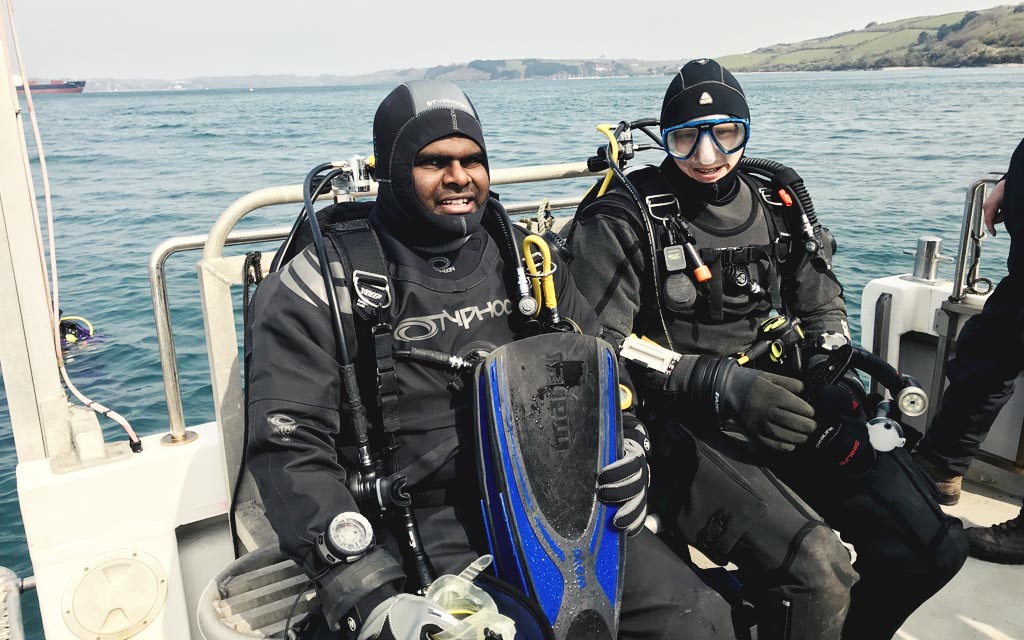 Yo-Han Cha is facing a choice every drysuit owner must consider at some point… patch it up, or jog it on?

If, like me, you have to hang up your undersuit after a day’s diving in the hope that it’ll be vaguely dry in time for the next day’s diving, you may look back fondly on the days when your drysuit actually kept you dry.

Mine used to, when it was new. But years of use have taken a toll; these days it’s usually a little bit damp after a dive. Identifying a leak can be tricky, though. If I’m diving on a hot summer’s day, which can happen in the UK, there’s no doubt that there’s some sweat contributing to the dampness.

If you’ve ever had the pleasure of traipsing back to your car in Swanage’s distant long-stay car park on a gorgeous summer’s day, you will naturally generate a lot of sweat. So, I normally convince myself that the moisture is self-generated and I should really be grateful for the fine weather.

But as the socks grow damper and I look increasingly as if I have wet myself, I have to admit that I have a leak. If I don’t have the time to send it in for repair, I’ll try to identify where the leak is myself. So… a plastic football in the neck seal; two cans of Irn Bru in the wrist seals, pump up the suit and some washing up liquid splashed around to help pinpoint those incriminating bubbles.

That’s how my housemates once found me when then walked into our living room. “It’s not what you think!” was my immediate response to their alarmed faces (they’re not divers). Whatever they were thinking (I didn’t ask), it wasn’t that!

I’ve found that finding a leak involves detective work and a sharp eye. Some are better at it than others. As the smallest breach can cause the wettest dive, I’ve sometimes had to ask for help finding the leak, especially as they’re not always in the places I first suspect.

Wet feet, for instance, would indicate a leak in the feet, but the effect of gravity over the course of two dives can mean that the sea has seeped in from above. So, you line up your suspects: the shoulder; the zip, the zip mount… all have been found guilty at some point. Sometimes it is exactly where you expect… my crotch has been re-seamed on multiple occasions! It’s not the lack of bladder control, it’s my crotch seams, honest!

After my most recent repair, I think I’ve accepted that I’ll just have to get my drysuit pressure-tested regularly. At the end of the day, it has seen many dives over the years and is now showing its age. If some of you are thinking “they don’t make them like they used to” as you have a drysuit that’s been used for 20 years without any problems, perhaps there’s a case for that, but it doesn’t really help me right now.

I might just be tempted to buy a new drysuit. We shall see. In the meantime, I’m onto my second suit-drying gadget, after seeing the latest model in action, as various friends’ drysuits sprung leaks over the course of a week-long trip to West Cornwall. And I should buy some Febreze for my undersuit. The mix of my ‘natural musk’ and seawater would be banned under the Geneva Convention.

Exclusive deals for BSAC members with Otter Drysuits! Current BSAC members can get 10% off RRP on Atlantic and Britannic MK2 Telescopic Suits.