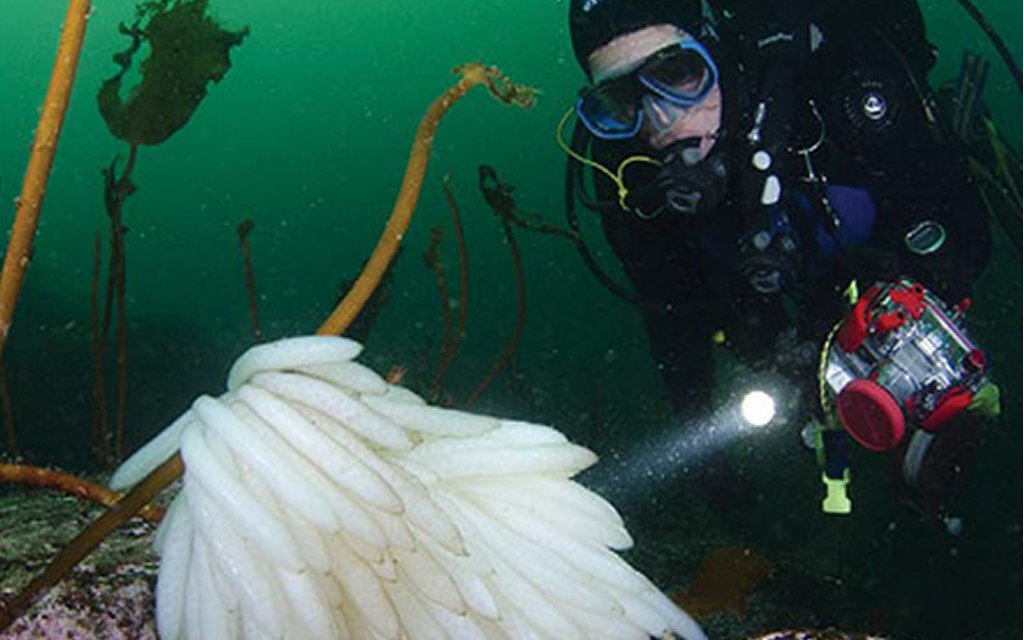 Following a successful trial this year, the North-west Region plans to run a combined First Class Diver (FCD) and Advanced Instructor (AI) preparation group every year, beginning in November with an open invitation to any interested divers in the region.

At the inaugural event last November Andy Proctor, a National Instructor and the AI Chief Examiner, described the process to around 30 attendees. Since then the group has been active, holding two open-water events focused on improving personal diving skills while task-loaded, project diving in Capernwray and Salford Quays. It has also run dry sessions on equipment at Aqualogistics in Stockport, seamanship (including weather, IRPCS, chartwork and buoyage) and dive planning.

The final event before the summer exams, was held at an exam location – Cumbrae, off the Ayrshire coast near the port of Largs – on 3 and 4 June. The group brought three Rigid-hulled Inflatable Boats together for a weekend combined practical prep event for four FCD and four AI candidates.

Once everyone assembled on the first evening, the group split into FCD and AI groups to plan Saturday’s diving. The FCD group decided to locate and dive the Arthur, a small steamer lost in Loch Long in 1908. 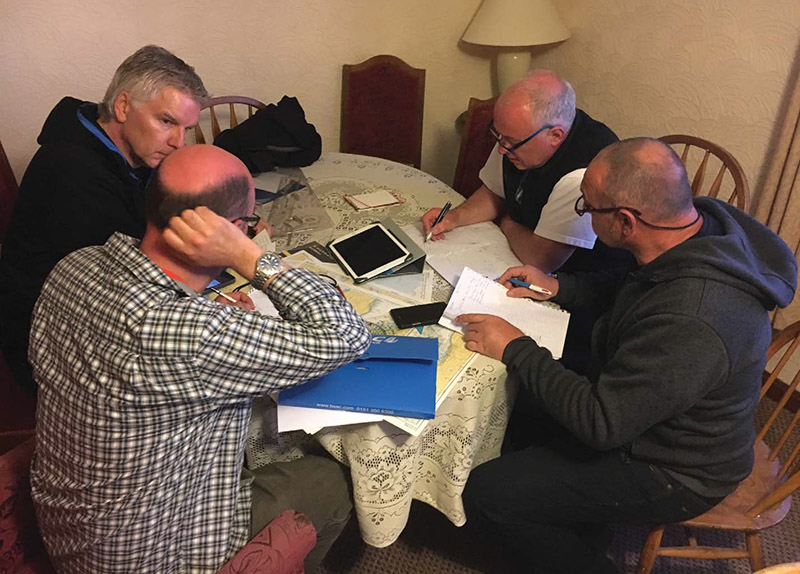 The AI group planned a wall dive on Trail Island and a wreck dive on the Lady Isabella, focusing on the teaching opportunities for an instructional dive.

The weather was kind to all and after a great day’s diving the groups met back at the accommodation for another planning session. Sunday saw both diving with a purpose. The FCD group attempted a vertical wall survey at Trail Island and the AI group taught seabed marine life survey techniques north of Great Cumbrae.

The prep event is about supporting candidates on the journey to their goals. AI, in particular, does not traditionally have a prep event and this served as a pilot to see if it worked and was valuable. The National Diving Officer has now approved the running of the event and the dates for the next combo trip are 23 and 24 June 2018.

Regional prep events are a chance for members to develop their skills ready for any of the BSAC national exams. Mark Paisey, North-west Regional Coach, decided to try out this new combined AI and FCD prep event because while the exams themselves are different, the facilities needed for both are very similar and by increasing the numbers on a prep event it opens up opportunities.

The Advanced Instructor Prep group allowed divers to practice skills learned on an Advanced Instructor Course, working around the exam criteria with feedback from the team. The chance to develop more ‘during a dive’ teaching and having a go at teaching project skills also meant that these instructors went back into their clubs ready to extend member’s skills.

First Class Diver is all about expedition-style diving and projects. For their prep the FCD candidates were given some sites to investigate in advance, including a wreck site that there was little information about. They did a great deal of research in advance, with the intention of locating, diving and recording information about the little-known site. The FCD preppers were really enthusiastic about discovering and recording information on something new, which is exactly what the qualification is about.

Running regional prep events gives divers the opportunity to come out of their clubs and away from the usual regional dive sites, to develop skills and take them home. We look forward to running more events like this around the regions.

I arrived late on the Friday evening with a RIB in tow. As I parked the boat a number of familiar faces of those I’d met at other events appeared out of the late evening air and immediately all of my concerns about attending a BSAC event on my own evaporated, it felt I was back diving with friends. As I walked in both the AI and FCD groups were deep into planning the diving for Saturday so I joined straight in.

One of the things I have often been asked is, why do FCD? Originally my answer was simple, I qualified many years ago and was looking for a new challenge, but as I have gone through the process I have discovered that there is a real role for FCDs in promoting club expeditions with a purpose.

So here I was with the purpose of passing my exam and learning techniques I could take back to my club. We were planning our first exercise to find the wreck of the Arthur.

This pet project of Pete Bicheno, one of our National Instructors (NI) for the weekend, has eluded a number of groups on FCD courses but our team had done its research and we even had a side-scan image of its location so the omens were good if not excellent. The following day the boat was quickly made ready and launched and on a fine Scottish morning we travelled north to the location of the Arthur.

Our first problem appeared when we tried to start our search: the echo sounder transducer was hanging off the back of the boat. After a bit of improvisation we were off. After some comments from the NIs on our search techniques, we finally decided we had detected what looked like a potential site. But alas we dived and didn’t find the Arthur and we joined the hapless groups of other FCD candidates that hadn’t found it.

The rest of the day involved using transits to find wrecks. By the end we were working as an effective team. When we returned to base, however, we were met with howls of complaints as it appeared we had taken the packed lunches meant for everyone, and so the reputation of FCDs grew.

Time for a quick debrief, dinner and then on with planning a marine survey to be carried out the following day. Sunday morning dawned and by the time our Nis arrived, the boat was launched and we were ready to go. After taking the Nis through our dry run, which clearly showed we knew what we were going to do, off we went.

Conditions were not ideal and after some debate we relocated to a more sheltered location, which was when it became clear that what we had communicated in the dry run was not interpreted by the NIs in the same way. After a bit of plan realignment we went on our marine survey. Returning to shore, there was just time for boat recovery followed by a debrief, and the weekend was over.

So, what did we learn? Well first these events are full-on, non-stop weekends with a real danger of over planning and unnecessary complications. They are great at team building, as by Saturday afternoon we were working together really well. They are great at developing all of those skills that an FCD is expected to bring to their club, and despite the hard work they are truly great fun. Each event has built my confidence as a diver and expedition leader and I have found a network of other divers who are a pleasure to meet and dive with. I need to offer my praise to the NIs, whose suffering and patience have shaped our skills. They make these events.

And finally, I have convinced my club to buy a side-scan sonar so I will be returning very soon to crack the mystery of the Arthur, that is assuming that one of the others doesn’t beat me to it. 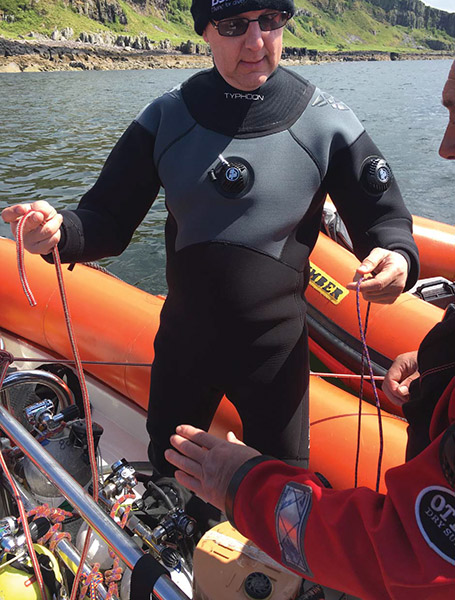 Having local knowledge of the area, I was promptly volunteered to lead the planning group as we began the process of not only organising our weekend’s diving activities but teaching as much of the process as we could.

As an Advanced Instructor you need to be continually identifying appropriate teaching opportunities. Our first objective was to assign roles and responsibilities for individual tasks focusing on chartwork and navigation, passage planning, the weather, tides, equipment, dive management, risk assessment and preparation of a timeline for our activities.

Our biggest challenge in this session was how to manage a group of seven split over two boats, which had to be Cox'd at all times, as well as ensuring everybody dived.

This proved to be an interesting conundrum as we explored ways of making it happen.

On Saturday morning the sun was shining and the sea was flat calm. Surface teaching is a requirement in the exam and there were numerous teaching opportunities from the start. We taught the launching of each boat and then how to load them.

This provided an opportunity to 'rope' the cylinders tight teaching a clove hitch knot.

Following the boat brief, there were opportunities to teach a VHF radio check, parts of the boat, boat handling, navigation, weather, buoyage…

The first 'instructional' dive at Trail Island gave opportunities to teach all aspects of a typical boat dive. On the bottom we were able to teach diving skills ending with a model demonstration of DSMB deployment.

Back on the boat, we returned to surface teaching. The second instructional dive after our surface interval was a wreck dive, giving the opportunity to teach wreck orientation and the laying of a distance line. All that teaching: but during our debrief of the day it was highlighted, and acknowledged, that our dive management had been limited – an area we all agreed needed major improvement.

Sunday was for diving with a purpose: a mini project to survey a flat sea bed around to ascertain its suitability for teaching the Marine Life ID course. Our equipment and deployment methodology was the subject of a dry run on Saturday night and taughton Sunday morning before the dive. This time we made the teaching of active dive management paramount. Our main challenge was that our jackstay rig needed more weight so 'plan B' kicked in using the boat anchor.

The event was undeniably 'full on' all weekend and we were all task loaded at times, but I also found it very rewarding. My personal observation was that our group needed to be more organised and disciplined during planning sessions and use pre-prepared templates for the different information streams being collated. As a group we also learned that active dive management is essential to keep things safe and running on time. We saw how easy it was for us to become fixated by other activities at the expense of dive management.

It is important to teach at all times, as opposed to simply 'doing' and this mindset needs to become truly engrained. The mini project dive also reinforced that things should be kept simple – you need to be flexible and adapt the plan where necessary. The overall process was invaluable in terms of giving us the opportunity to test our knowledge and skills, in addition to identifying any potential weaknesses.