Keep your buddies close and your anemones closer

I peered through the darkness trying to make out the easiest route to the entry point for the night dive. Saying it was rough terrain was an understatement. The walk, in full dive kit with cameras, was more of a stagger over rocks, tufts of grass laced with cowpats, wire, chains, anchors and muddy bogs. Once you made it to the water there was a 380-metre surface swim before you could descend for the dive. No, I wasn’t taking part in a sequel of ‘The Hunger Games’, I was on an anemone expedition with a group of marine biologists and we were looking for the nocturnal Halcampoides, a burrowing sea anemone that favours sand and gravel and only appears above the substrate at night.

Our expedition began a week earlier in Ballycastle, diving around the iconic Rathlin Island with local dive centre Aquaholics, based in Portstewart. Bernard Picton, curator of marine invertebrates at the National Museums of Northern Ireland had organised the trip for a team of anemone experts and enthusiasts. I’ve always been a sucker for an anemone, and had long yearned for a dive trip to Ireland, so for me it was a golden opportunity.

Northern Ireland has some stunning scenery and the area around Ballycastle where we stayed with Aquaholics was no exception. If the lure of the Giant’s Causeway and other picturesque land and seascapes wasn’t enough to get the tourists flocking here, then the more recent filming of Game of Thrones has certainly made its mark. Devotees of the show arrive in hoards to take scenic selfies at Winterfell or call by the Dark Hedges, an avenue of beech trees, now better known as its fictional counterpart, the King’s Road. However, we were more interested in what was going on below the waterline.

Rathlin Island is the northernmost point of Northern Island, and due to its exposed position, you can sometimes encounter rather exciting Atlantic upwellings on the short trip over from Ballycastle. We dived from a hard boat skippered by Aquaholics owner Richard Lafferty. We’d checked the forecast and it wasn’t looking all that promising, so we took the opportunity on our first day to visit the iconic north wall, which is the most exposed to weather, swell and currents.

It’s fair to say that there was a moderate current running as we dropped down the reef at the beginning of this dive, hanging onto our cameras and finning like crazy as the wall plummeted to a staggering 200m. Eventually, we dropped down behind the arch at around 30m and once sheltered from the current I realised it was going to be worth every heart-pounding moment of getting there. Due to the nutrient-rich water rushing past, the area is a stunning profusion of colour. The surrounding reef was smothered with dead men’s fingers, sponges and anemones. The visibility was 20m plus and as we reluctantly left the wall and started our ascent we drifted over a kelp forest while watching a myriad of moon and comb jellies pass by.

Our second dive that day was also on Rathlin’s north side but it was quite a contrast as we were heading for a 10m deep gully searching for Phellia gausapata. This is a quite a rare northern anemone but can be found on the west coast of Ireland in fairly shallow but exposed places, where it can be difficult to dive and we were hoping to find it here. I briefly got left behind at the beginning of the dive as I became distracted by crabs, lobsters and a family of shrimp hiding in a crack on the outside of the wall that led into the gully. But to my astonishment, I fortunately managed to stumble upon a couple of Phellia myself, sat proud on a vertical ridge between five and nine metres.

Photo by Jane Morgan, Velvet swimming crabs tucked into a crack in the wall outside the gully 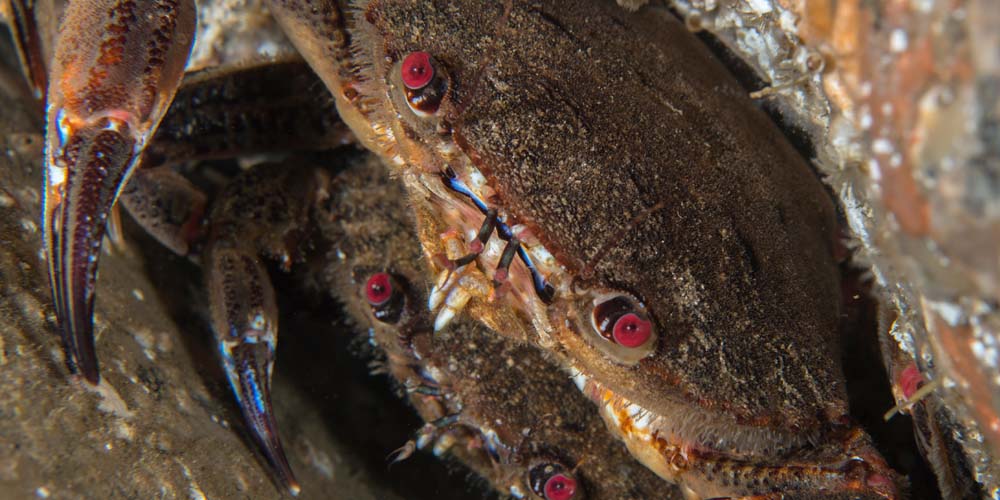 HMS Drake is a First World War cruiser sunk off Rathlin in 1917. It has recently been granted status. But we didn’t take a lot of notice of the wreckage as we were on a hunt for Edwardsia claperedii, a burrowing sea anemone with transparent tentacles, and we were not disappointed. I was diving with marine biologist Becky Hitchin and after dropping down onto the wreckage at 18m we headed for the sandy bottom on the sheltered side of the wreck. To our delight, literally just off the side of the wreckage the seabed was smothered with the almost invisible Edwardsia and it’s fair to say we didn’t move more than a few meters for the rest of the dive as we photographed all the differing shades and patterns we could find.

Photo by Jane Morgan, Sagartia anemones on the north of Rathlin 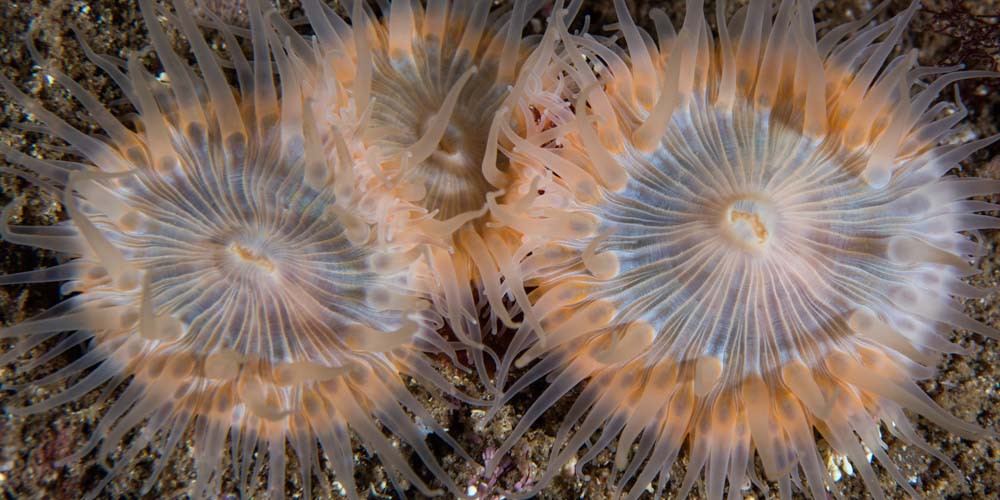 The rope bridge at Carrick-a-Rede was originally built by salmon fishermen some 350 years ago. More recently it has been in the spotlight as Renly Baratheon’s camp in Game of Thrones. The scenery below the waterline is rather less known but equally as stunning. We began by drifting over a kelp forest with mermaid’s purses entwined among the fronds. As we dropped a little deeper we came across the most incredibly colourful walls smothered in sponges and anemones. All the cracks and crevices were full of edible crabs and lobsters and on the outside fan worms, bloody henry starfish and painted topshells all jostled for space. Apparently you can often see sunfish around the point at the end of this dive. Sadly there were none to greet us on this occasion, but with the amount of other life and colour, I couldn’t really complain.

Photo by Jane Morgan, A mermaid’s purse (egg case) wrapped onto a kelp frond at Carrick-a-Rede

After a stunning week in the north, I drove down from Ballycastle to Carna, in Galway, along the Wild Atlantic Way, and if you ever visit Ireland I highly recommend it. The scenery is stunning all the way along the west coast.

I lost count of how many times I wanted to stop and take a photo. Then I saw a sign that made me laugh, it said 'Welcome to Connemara - let the wind in your hair', and they weren't kidding. It was our first day in Galway and the wind was gusting more than 48n miles per hour, so launching the RIB was out. As an alternative, the general consensus was to head for one of the sheltered sea lochs.

When the wind calmed, we used a private RIB for our diving, but if you don't have one, you could head down to Scubadive West, possibly the most remote dive centre I've ever visited on the coast of Glassillaun.

Ardbear Salt Lake in County Galway was an interesting looking site, just off a narrow windy road, over the picturesque Ardbear Bridge. On the seaward side of the road, it was a profusion of bubbling white water, but the other side couldn’t have been more of a contrast with hardly a ripple on the surface, protected as it was behind the bank. It was an easy entry across a grassy footpath, the only difficult part of the kitting up and entry was preventing the dive kit from blowing away. My buddy, Kerry and I didn’t travel that far underwater, in fact, I’d be surprised if we dipped below 6m, but there was enough life to keep a macro
photographer happy for hours. For a start, there is a serpula reef system, so there are large clumps of the tubeworms, Serpula vermicularis, which we had a lot of fun trying to photograph as they disappear down into their calcareous tubes as soon as you approach. The silty bottom was covered in burrowing anemones, cannibalistic fish and large communities of shrimp. The best spot was by my buddy Kerry, who found a baby Anthopleura ballii, known by some as the red-speckled anemone.

This probably goes down in history as one of the most interesting night dives that I’ve ever done, particularly getting to the entry point as I mentioned above. But it was all worth it because we found Halcampoides, along with bobtail squid, a bull huss, loads of shrimps, crabs, lobsters, pogge and pipefish. When we surfaced the sky had cleared and we had the most phenomenal view of the Milky Way on the long swim back to shore.

Photo by Jane Morgan, close up of an anemone (Mesacmaea mitchelli) 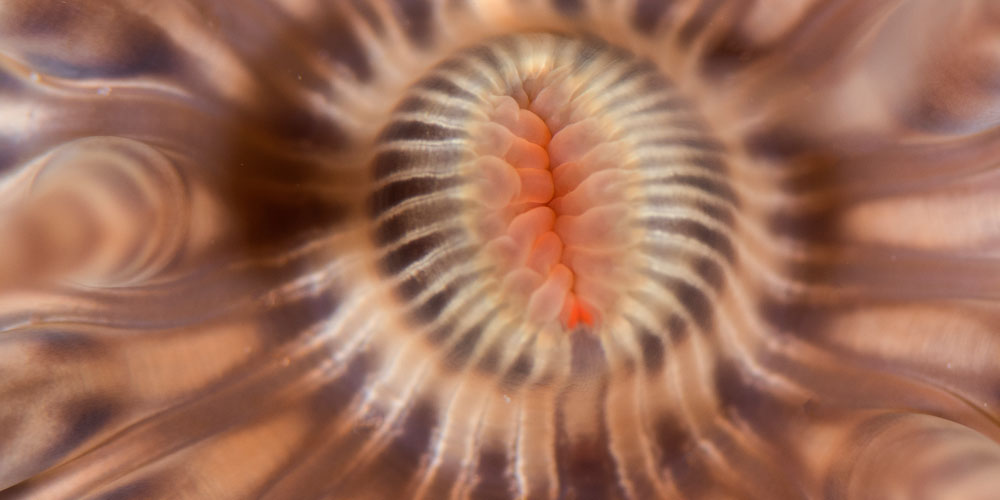 By day three the wind had dropped enough for us to launch the RIB at last and start exploring Kilkieran Bay. Due to the variation of habitats and marine life seen there on one dive, Ardmore Quay was one of my favourites. We started the dive on a maerl bed interspersed with a host of anemones including Mesacmaea mitchelli. As we drifted along with the current we found thornback rays peering out from the sand and gravel along with scallops. Juvenile John Dory and dogfish skirted among the rocks and boulders and mermaid’s purses were tied onto the sponges. Towards the end of the dive as we made our way up the reef slope we were treated to a host more anemones, mostly Aureliania heterocera. 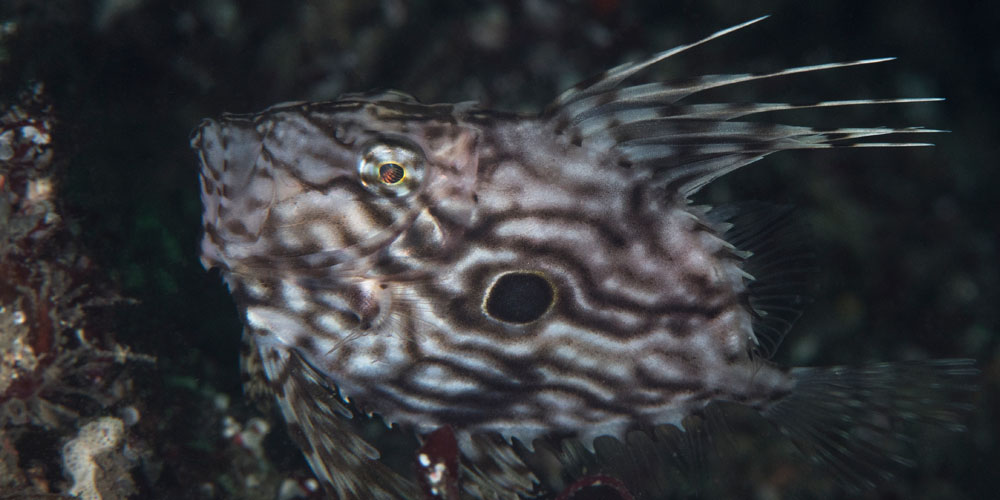 The first thing we noticed when we dropped down onto this site was an old buoy line that had been colonised by plumose anemone Metridium senile. In among the anemones there were clumps of hydroids, sponges, Leach’s spider crabs and nudibranchs. But on the seabed below Bernard pointed out Scolanthus callimorphus. This 16-tentacled worm anemone has only been positively identified in Kilkieran Bay, Galway and Dorset. We continued drifting along over the spit of maerl gravel that turned into large dune style structures in a mild to moderate current. On the way we photographed many differing colour variations of Aureliania heterocera, Peachia cylindrica, Cereus pedunculatus and Cerianthus lloydii. 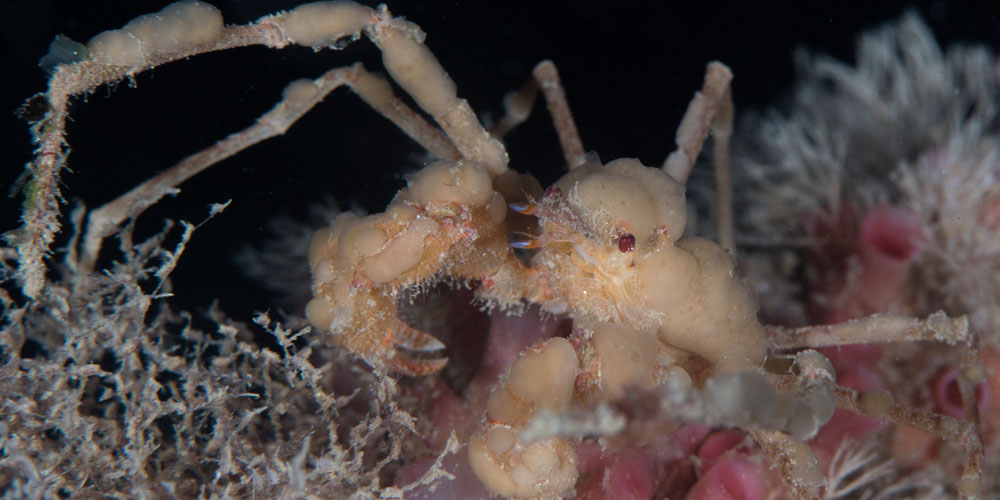 Thanks to the team

I thought that I had travelled a long way, on my 1,340-mile round trip from Penzance, but that was nothing in comparison to others, as we had experts all the way from the United States, Poland, Brazil and the Netherlands. Bernard Picton (IRE), Meg Daly (USA), Becky Hitchin (UK), Mike Markey (UK), Heather Dame Glon (USA), Dani Rodrig (IRE), Piotr Kuklinski (PL), Ron Ates (NL), Alejandro Grajales (BRZ), Lydia Jane White (UK), Blaise Bullimore (UK) and Kerry Lewis (UK).