In the mix: Staying warm - putting the science into suit choice

Gavin Anthony – consultant in diving and life support and a member of BSAC’s technical group – explains how divers can ensure that they choose the best thermal protection.

All of you, wherever you dive, know you need to stay warm. This applies as much in tropical waters as it does under the ice in polar regions. As a species we have evolved to cope with the range of temperatures experienced on dry land, and yet even in moderate climates we use clothing to provide us with adequate thermal protection. For those with a scientific or technical bias, thermal conductivity is the ability of a material to conduct heat and is measured in watts per metre per degree Kelvin (W m-1·K-1).

As soon as we are immersed in water the challenges increase considerably, as the thermal conductivity of water is 24 times greater than for atmospheric air. It follows that in water we could lose heat 24 times faster than in air. In fact the rate will be even greater than this if there is a flow of water over the body taking the heat away. 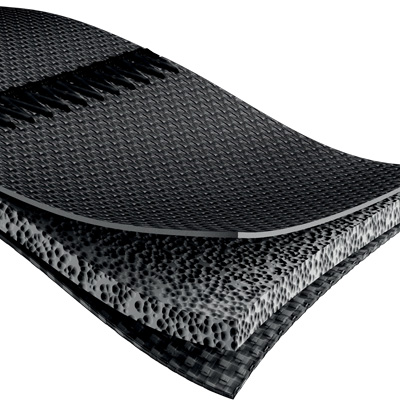 As you know, to overcome this high rate of heat loss we wear thermal protective clothing. The basic principle of all clothing is to try to get a layer of material next to the body that has a low thermal conductivity. In addition, you want to minimise the movement of the material to reduce the amount of heat being moved away from the body. As indicated above, air has a low thermal conductivity and the basic concept of passive thermal protective clothing (where no heat is actively provided) is to trap an air (or other gas – a subject for a future article) layer close to the skin. Divers usually achieve this using either a wetsuit or a drysuit.

Semi-drysuits use the same principle as wetsuits but a reduced water flow through the suit reduces heat loss. For both wetsuits and drysuits, the basic thermal insulation is provided by a layer of trapped gas. (For some commercial diving, particularly saturation diving, the divers are kept warm by hot water continuously pumped through a hotwater suit. In this instance the heated water provides the thermal-protection layer rather than a gas.)

Wetsuits are made from foam neoprene, which encapsulate small gas pockets (due to the manufacturing process the gas is actually nitrogen not air), it is these gas pockets that provide the majority of the insulation and increase the flexibility and thereby comfort of the material. Wetsuits and semi-drysuits also provide a further degree of thermal protection by typically being lined on the inside with a cloth material that holds the water in the suit next to the skin and reduces the water flow through it.

Drysuit systems, by their name and nature, provide an outer gastight and watertight barrier that allows a layer of gas to be held within them. The amount of gas within the suit, and the movement of the gas within the suit, is controlled by both the underclothing worn and the degree of suit inflation used. Underclothes provide a gas-trapping layer between your skin and the outer waterproof suit. The type and configuration of the underclothing used dictates the movement of gas within the clothing and therefore the level of insulation provided. All this is fairly common knowledge to most divers, however, when purchasing and selecting a suit system to use, the evidence that should be available to help identify the degree of insulation provided is not always available or recognised.

Under the Personal Protective Equipment (PPE) Directive, which will be superseded by new PPE Regulations in April 2018, it is specifically required for diving that ‘Where the foreseeable conditions of use so require, the diving equipment must comprise… a suit which protects the user against cold’. To help ensure that the suit system used is fit for purpose there are European Standards to cover diving suits; BS EN 14225:2017, Diving Suits, Part 1: Wetsuits and Part 2: Drysuits. There is also a third part for actively heated and cooled suits. A wetsuit or drysuit that meets these standards should be CE marked and carry the number of the relevant standard.

When purchasing a wetsuit or drysuit for diving, look for this marking. If the suit doesn’t carry it then it is only intended for general watersports (such as sailing and kayaking) and is not specifically certified under the PPE Directive or Regulation for diving. Interestingly there is additional vital information that should be available regarding the level of thermal insulation (called resistance) that the suit material provides, particularly if it is made of foam neoprene or another material with inherent insulation.

To help us understand the insulation provided it is worth considering some of the terminology used. As I said, all materials have a thermal conductivity (the rate at which heat passes through the material). In addition to this, if the material has a defined thickness, such as the thickness of a foam neoprene wetsuit, then the resistance that this thickness of material provides against heat transfer can be measured. This is the thermal resistance and is known pragmatically as insulation. Unfortunately the units used for thermal resistance or insulation are also rather complex: degrees Kelvin metre squared per watt (K·m2·W-1). Within the European Standard BS EN 14225-1:2005, Diving Suits it is referred to as RCT.

Confused? I’m not surprised, so are many other people out there, and, to help, some more popular and convenient terms are used.

The insulation required to keep a person at rest thermally comfortable in air at 21°C is known as the ‘clo’, this is the unit usually used for thermal insulation of clothing (1 clo = 0.155 K·m2·W-1). When a person is immersed then the insulation provided is usually termed the immersed thermal resistance or immersed clo. Those who have purchased duvets will recognise a further unit, the Tog (named after Roman togas); a clo is equivalent to 1.55 tog.

All this may be technically interesting but it’s not much help in deciding what is the best diving suit to use. Fortunately, the European standard for diving suits has a standard method for testing the insulation of wetsuit and drysuit materials that claim to have thermal insulation, both at the surface and at depth. Within the standard four classes of material A insulation, Class A is equivalent at the surface to 1 clo.

The immediate question then is what material do I need? But there is no clear answer what would be the best for you. There is some very general advice within the European standard (see table) but this is very heavily caveated. Unfortunately it very much depends on where you want to dive, how long you typically want to dive for and what your personal physiology and morphology are. However, medical opinion is clear, it’s better to wear adequate external thermal protection than to develop and rely on your own personal insulation.

Most experienced divers have learnt by trial and error and the less experienced generally seek advice from their instructors. A point to note is that most divers will define the thermal insulation of a wetsuit by its thickness. Testing, however, has shown that this can be misleading as performance depends on the properties of the material rather than just thickness. As an example, testing has shown that some five-millimetre suit materials can offer more insulation than 6.5mm or thicker materials. The advantage of the thermal performance classification is that it puts all suiting on a level playing field and provides the diver with an objective comparison system for making informed choices. So, look for and use the thermal performance class to identify how good a suit is, not just how thick it is. 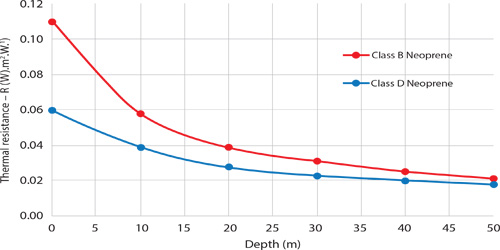 It is well known that foam neoprene suits contain gas and that they compress with depth, thereby losing their insulation. The test technique used in the standard takes this into account and requires testing immersed at both the surface and at 50m. If the technique is used to test materials at a range of depths the loss of insulation becomes clear (see graph).

The obvious omissions in my explanations are drysuit systems where the insulation is primarily provided by the underclothing used under the suit. It is possible to test the thermal resistance of underclothing to BS 4745:2005 and some limited testing has shown insulation values in excess of 1.5 clo (2.3 tog) for a single layer. Unfortunately there is no regulatory requirement to do this or to mark the insulation value on underclothing. We can only hope that manufacturers will take up the challenge to test and mark their underclothing with a clo (or tog) value and use this as a marketing tool.

If all underclothing was marked accordingly it would greatly improve the way that divers choose their suits, help improve comfort and thereby increase diver safety.