Gender on the agenda 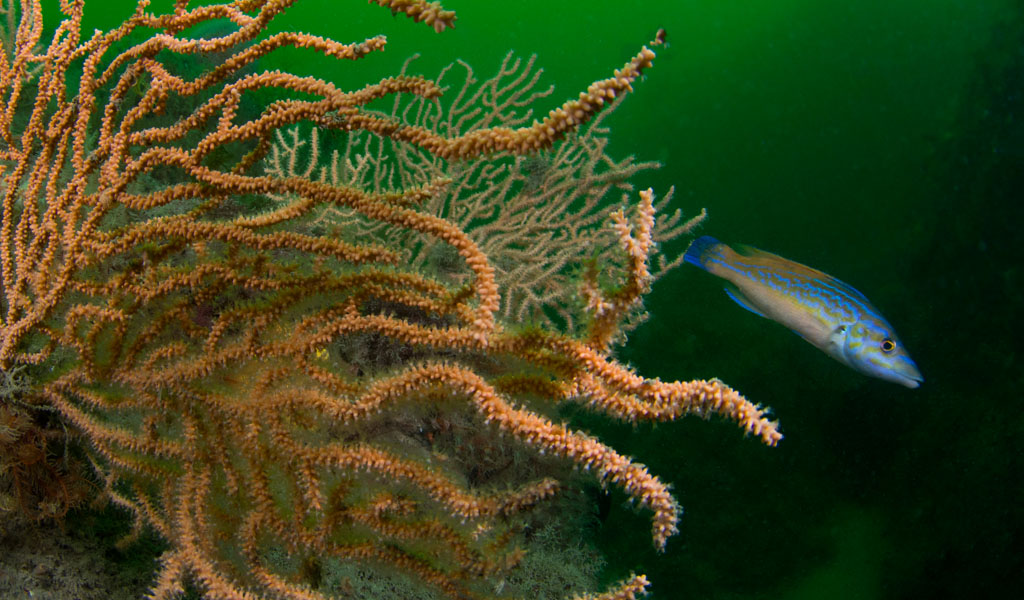 Michelle Haywood casts a scientific eye at the humble cuckoo wrasse, king – or queen – of sexual fluidity on the reef.

There is a growing and divisive discussion within society about an individual’s gender. For many people, their gender identity matches their sex at birth and they live their lives happily. But for maybe a fifth of humans the issue of gender is more difficult, and may not match their sex at birth.

Although the terms ‘sexual and gender fluidity’ are enough to send some people into an apoplectic rant, the rest of the animal kingdom doesn’t follow such a rigid approach. Even in species where the body shape and colour suggest one sex, the internal physiology may belong to the other sex. There are species that are hermaphrodite (both sexes present in one individual) and other species in which an individual’s sex changes at some point in development.

As divers, we encounter one of the best examples of a sex-changing animal, the cuckoo wrasse (Labrus mixtus). Cuckoo wrasse show clear sexual dimorphism where the males and females have distinctly different appearances. Females are pink/orange in colour with three black patches on the dorsal fin. Males are a striking blue and orange striped fish with blue margins on the fins.

Cuckoo wrasse are normally found in pairs. Females lay eggs in a nest of algae and the male guards the eggs. But these roles are not fixed. Should the male be lost, the female cuckoo wrasse can change into a male in a process that takes around seven months to complete.

To go through a complete natural sex change requires radical restructuring of the sex organs plus changes in morphology (appearance) and behaviour. Cuckoo wrasse have been studied by scientists as a model to explore sexual determination in vertebrates. At a molecular level, understanding how these changes occur can help explain what is going on in our own bodies.

One of the driving factors for whether to change sex at all is to do with maximising reproductive chances. The aim of any organism is to maximise the number of offspring it produces, so there may come a point when it is better for an individual fish to be a large male (capable of defending territory to monopolise matings with females and protect the nest). Smaller males are at a disadvantage and may not breed at all. Whereas if you are a small fish, being female will significantly increase your reproductive success. If Cuckoo wrasse can change to being male as they grow larger, then they get the maximum lifetime reproduction. Cuckoo wrasse are known as protogynous hermaphrodites (female to male sex change).

Once the environmental cue for sex change has been triggered, it only takes a couple of days for female hormone levels to start dropping. This change in hormones triggers a cascade of changes at a cellular level. The egg-producing tissues in the ovaries decrease in size and egg production ceases altogether. Spermatocytes (which produce sperm) start to develop and their numbers increase.

At the same time as changes are occurring in the gonads, the colour of the fish will start to gradually change. Sometimes it’s possible to find fish that are in the process of changing and get a true mix of the sexual characteristics. Sex change in cuckoo wrasse appears to occur mainly between 7 and 13 years of age, and most adult male fish will have started life as females before gaining their tropical colouring.

The hormonal control of fish sexual characteristics has been in the news recently because of the effect that human birth control hormones have in altering sexual development in fish. Female hormones caused the development of eggs inside the male fish testes. But, and it’s a big but, there is very little evidence that birth control hormones are affecting natural fish populations and the studies in this have been used by anti-birth control campaigners to try and prevent access to contraception. Pardon the pun, but this issue is a bit of a red herring.

This column was originally published in SCUBA magazine, Issue 104 July 2020.