The dual perspectives of snorkelling 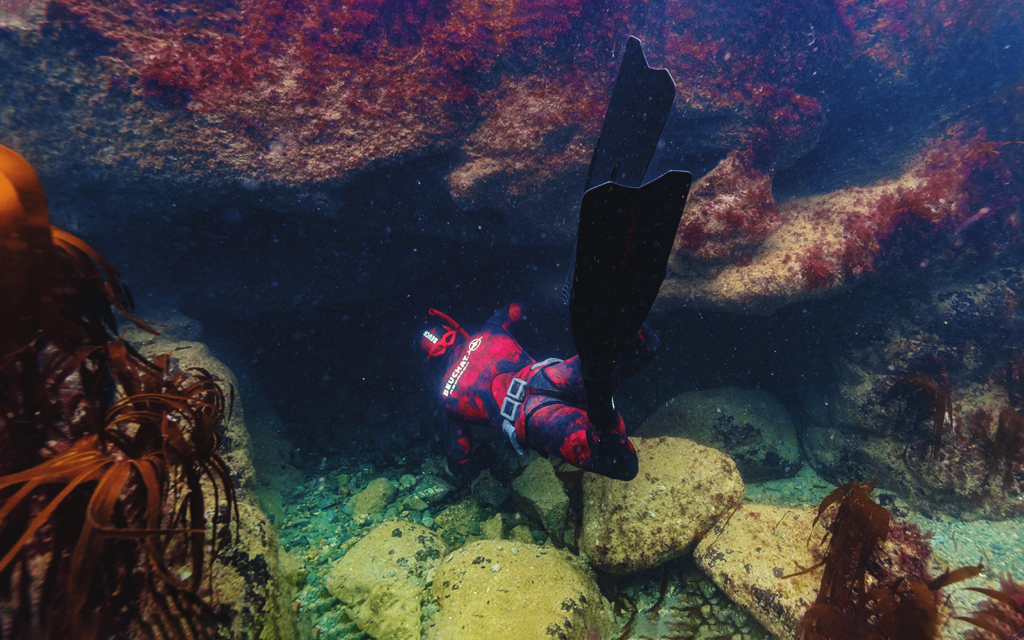 Finding himself in Cornwall, Andy Torbet takes the road less travelled and explores a bay dominated by a less than lovely harbour wall.

Things are not always as they appear. I have often written in this column about why, when snorkelling and therefore on the surface and spending as much time exposed to the terrestrial landscape as the submerged one, the topside views can be just as important. I’ve snorkelled along lake banks, down rivers and along stretches of coastline when the visibility was far from ideal, but the trip was made worthwhile by the water-line perspective of the world above. In fact, I’ve undertaken river descents by snorkel, knowing full well the water will rate 100% turbidity, because I want to drift past the landscape and see it from the river. However, the opposite can also be true.

We normally associate beautiful dive spots with beautiful entry spots. And in the main this is true. Clean, rocky beaches, descending from well-maintained coastal paths bordering wildlife reserves; the sparkling shingles on beaches near quaint village harbours; the scenic mountain gorges with translucent rivers bisecting them. You get the idea. However, we know the aquatic world is a different proposition to the topside one and, beneath the surface, things can be very different.

I was recently in Cornwall, an area not short of spectacular and beautiful diving locations above and below the waterline. I was camping down on the Lizard Peninsula, which is of course the setting for the famous shore diving venue, Porthkerris Cove. I wasn’t diving at Porthkerris, but at one of the many other little bays in the area that are open to the public.

This particular bay is dominated by an active and busy quarry, with large machinery moving stone along the imposing concrete jetty to be loaded on the large commercial ship that moors alongside regularly. Staring at the harbour wall and the hectic industrial landscape, you could be forgiven for writing it off. I would probably have done the same, had I not been persuaded by some friends who live nearby. They had local contacts who were able to establish a time to explore the submerged sections of the wall when the ship was neither in nor had any chance of returning that day. I should reiterate that it is a public place, set against a somewhat industrial backdrop.

We set off from the shore and along the concrete wall. The vessel had recently departed and the rumble of the big diggers above passing along the harbour wall could be heard. I had suspected the waters would be churned up and visibility low. But they were clear, a good seven metres which, by UK standards, is very welcome, and the sunshine overhead sent slender shafts of light into the shallows.

The wall itself was bordered by thick kelp beds full of wrasse and spider crabs. The wall itself had shore crabs hiding in the small cracks and crevices but also appears to contain a number of small caves… and one fairly large one. Caves are always interesting to poke one’s head into, there is always life sheltering in there.

As I jutted my head into one small cave opening, I was a little startled to be met by another head, significantly larger than my own. I humbly withdrew and was followed by the owner of the other head - a sizeable male grey seal. He was followed shortly thereafter by a smaller female. They seemed neither bothered by our uninvited presence at their front door and swam around us before disappearing off into the gloom.

Often, you can judge a dive or snorkelling site by looking at the terrestrial landscape that leads down to the submerged one. But sometimes exploring the submerged parts of even the most uninspiring of topside views can lead to some real gems.