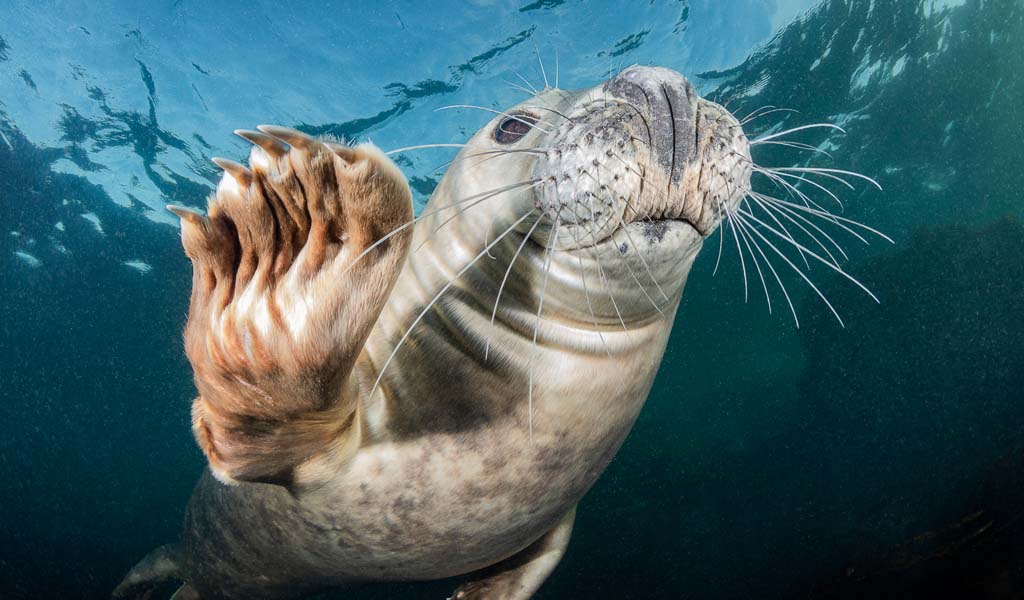 It’s not often that UK underwater stories make front-page news, but that’s exactly what happened when various outlets picked up the discovery of the astonishing clapping behaviour of male grey seals at the Farne Islands in Northumberland.

The man behind the footage is Dr Ben Burville, a GP who has been diving the Farne Islands for about 18 years. In his spare time when not underwater, Ben is a visiting researcher for the Newcastle University School of Natural & Environmental Science, studying dolphins as well as creating Project Gryphus, the world’s largest video archive of underwater grey seal behaviour.

If you dive regularly in the Farne Islands, you stand a good chance of bumping into Ben, as I have done many times over the years. I caught up with him again this week to chat about this latest discovery and his top tips in diving with grey seals.

Firstly, please tell me more about this amazing clapping behaviour

I first saw a seal clapping years ago, but never managed to get it on camera as the big males tended to do it once and not give any tells beforehand. This time I got lucky because I heard it further away, pressed record on my camera and then the male happened to come closer to me and repeated the behaviour. I believe the clapping is a threat signal and an advertisement of strength to other males during mating season. I’ve only ever heard it between September – December so I’m not sure if it also happens outside this season. It’s certainly a very striking noise underwater and had an immediate effect on other males in the area.

What tips would you give to divers or snorkellers looking for seal interactions?

Be respectful and don’t disturb them. Let them initiate any contact and don’t try to touch them. If you’ve seen some of my footage online, you’ll see I often get some really close encounters but it’s always on their terms.

Especially when just using a snorkel, it’s easy for inexperienced snorkellers to get too close and ‘flush them’ – scaring the seals off the rocks and into the water. It’s important for seals to rest onshore for periods of time, so you must try to avoid disrupting their natural behaviour.

People (including me) have described grey seals as the ‘labradors of the sea’. Is this how you see them?

I’ve spent hundreds of hours with grey seals, and I’d trust any wild seal more than a domestic dog. I’ve got to know their body language and behaviour. Having said that, it’s worth remembering that a labrador weighs about 34kg and a male grey seal weighs 220kg on average. They’re actually genetically closer to bears than dogs. Also, they’ve got some very nasty bacteria in their mouths if you do get bitten. So treat them with respect.

This new behaviour is brilliant to see, but would you say it’s your favourite seal encounter?

No; I’d say two different highlights come immediately to mind. The first is when a seal chooses to lie beside me and fall asleep. That’s a sign of real trust and acceptance from the animal. It’s a privilege to have them so relaxed in my presence. The second moment I’d say is when a seal approaches me and chooses to hold my hand: it gives me a squeeze, and I squeeze back, and for me, time stands still. It’s a wonderful feeling to just be there, in that moment.