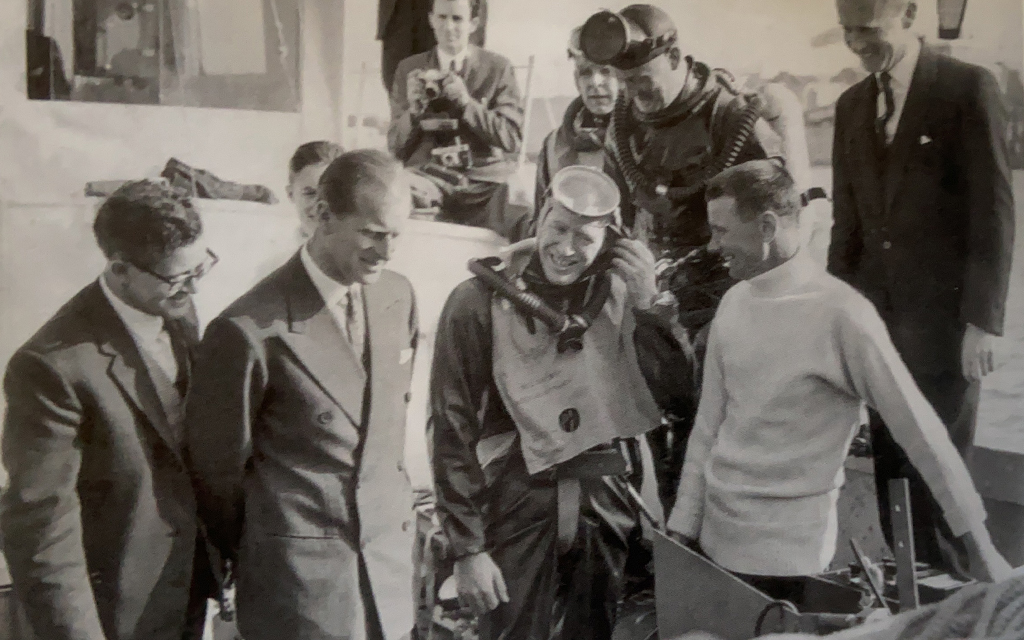 As the world mourns the death of HRH Prince Philip, Duke of Edinburgh, the British Sub-Aqua Club pays tribute to an extraordinary leader who helped shape its direction during and beyond his term as Club President.

The Duke served as the club's first President from 1960-63, a limited period, which he believed to be appropriate for any presidency. However, his association with BSAC only became closer after those first three years had elapsed. It was a period of rapid expansion in scuba diving and club life; the Duke felt strongly about the potential of the underwater world, in particular, the role that diving could play in advancing science and our understanding of the sea.

His own fascination with the sea seems to have been instilled at an early age, possibly during his school years at Gordonstoun in northern Scotland. Also, the Navy ran deep in his family heritage; his maternal grandfather had been the First Sea Lord, the Commander of the Royal Navy. His uncle Lord Mountbatten had command of a Destroyer while Philip was in training, inspiring him to become one of the Royal Navy's youngest First Lieutenants.

The young Philip first swam underwater in 1937 and recalled the experience while delivering his presidential address to BSAC in 1960. "I first put on a pair of goggles, or perhaps I should say a sub-aqua mask, 23 years ago," he said. "Snorkelling has given me endless pleasure ever since... and I am sorry I only met the acquaintance of aqua-lung diving rather more recently. I regret very much that I didn't start a great deal earlier."

In fact, the Duke had learned to dive under the instruction of BSAC member Ley Kenyon, a pioneering underwater filmmaker and author, who taught him in the privacy of the swimming pool at Buckingham Palace. The Duke clearly enjoyed diving and made sure there were two fully equipped Navy divers on the Royal Yacht to act as underwater escorts when he was able to go diving.

In 1963, he relinquished the BSAC presidency [the role transferred to the Earl of Granville], but remained closely associated with the club and its members. The new category of Honorary Life Membership was accepted by the Duke, cementing a Royal association that persists to the present day. The Prince of Wales took up BSAC's Presidency in 1974, and it transferred again in 2014 to the Duke of Cambridge, the club's current President.

BSAC training was incorporated into the Duke of Edinburgh Award scheme in 1960, and in 1964 the club's then Chairman, Colin McLeod, announced that the Duke had decided to present an annual award for scientific diving expeditions. The British Sub-Aqua Jubilee Trust was formed to administer the Duke of Edinburgh's Prize, in addition to allocating grants to scientific diving projects.

For more than 50 years, commended and winning expedition divers were welcomed annually at Buckingham Palace to receive personal congratulations from the Duke, who spent much time speaking informally with them. He continued the tradition long after the scaling back of his other duties, with his final awards taking place in 2016, when an allotted 15 minutes turned to 45 as he savoured his exchanges with the winning teams.

Present at several such occasions was BSAC's Chief Executive Mary Tetley, who said the Duke showed his informal side when chatting with expedition divers in his own home. "I found the Duke very humorous and informal, quick to put people at their ease," Mary said. "Behind the banter was a passion for heritage and a belief in the alliance of science and diving. In particular, you could see his eyes light up when he talked about the Royal Navy and naval history."

The Duke of Edinburgh leaves a significant legacy for British diving, having instigated an enduring Royal patronage of BSAC. "He was our first Royal, and his association with BSAC gave us a special status," Mary said. "It came from his own deep fascination for diving, and his desire to share the beauty and richness of the underwater world."

The Duke's lifelong enthusiasm for diving was expressed in a letter to BSAC and the organisers of the World Congress of Underwater Activities in 1962. "It is indeed a challenge to extend man's knowledge of the last great unexplored area of the world – the sea," he wrote. "The scope for increased knowledge of the sea and what lives in it is enormous, and I am sure that this knowledge, scientifically evaluated and pursued, is of the greatest importance in the future of mankind."