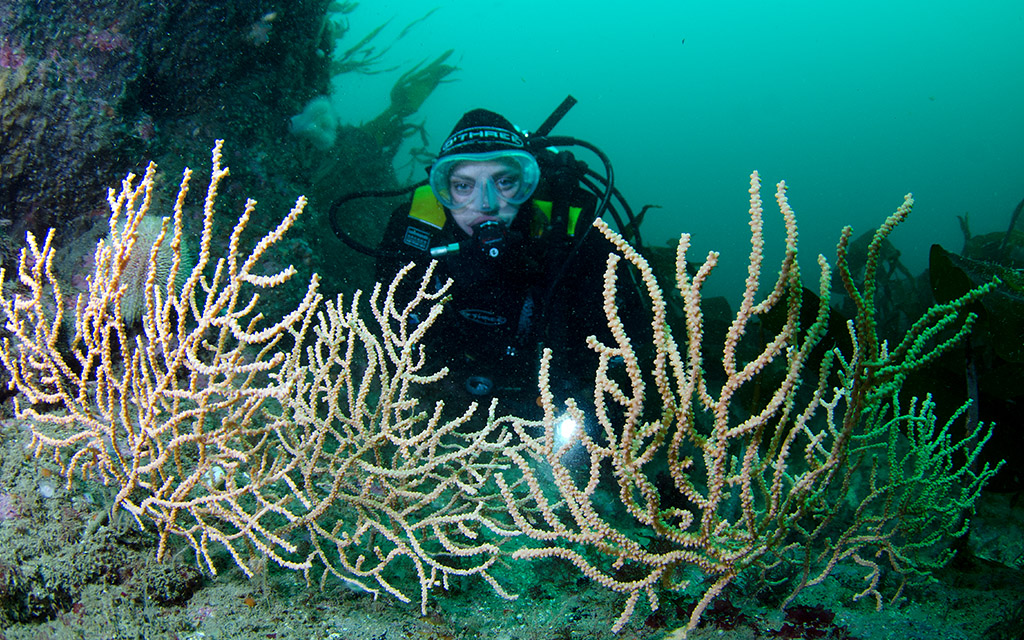 Though summer holidays abroad are potentially off the table, that doesn't mean dive adventures should be! Make summer 2021 the year of UK diving...

Whether you're traditionally a warm-water diver, or just never had the opportunity to crack out your fins for the British waters, the pandemic has given us all a brilliant opportunity to remember how incredible the diving can be at home.

SCUBA editor, Simon Rogerson, has laid out ten incredible things you can experience right here in UK waters that means missing out on a summer abroad doesn't have to mean missing out on great dives.

1. The UK is wreck heaven

With centuries of maritime heritage, there are more shipwrecks per mile around the UK coast than any other nation. They range from barely discernible debris trails to battleships that once fired their guns at British ships.

Wreck diving is the mainstay of BSAC clubs, a traditional crowd pleaser whether the site is an established wreck or an unknown mark on the charts to be explored and evaluated. Helpfully, shipwrecks provide a holdfast for marine life and shelter for fish, so history and wildlife devotees alike can dive the site in their own way.

The most celebrated wreck site in the UK is Scapa Flow, a natural harbour in Orkney where the German High Seas Fleet was scuppered at anchor in 1919. That said, there are fascinating wrecks around every mile of the British coast and in the deeper waters beyond. Wreck diving is not inherently dangerous, but to get the most from a wreck you need to stay safe and be aware of your surroundings. BSAC has two Skill Development Courses that will help you decode and navigate the sometimes-confusing environment of the sunken ship. 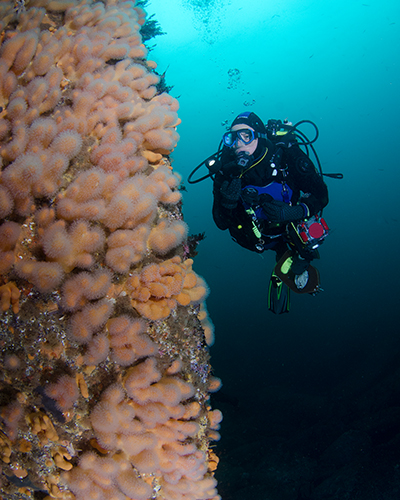 Wherever you may be, there's nothing like diving alongside a steep coral wall, its surface festooned with corals and buzzing with fish. The UK has some genuinely world-class wall dives, from the anemone-encrusted granite of the Isles of Scilly, to the thick clusters of orange and white soft coral that adorn the reefs of St Abbs, on Scotland's east coast.

Visibility is relatively clear on a wall dive because in most cases the seabed will be far below and there's little chance of stirring up any silt. This is certainly the case in the Scillies and West Cornwall, where the walls are fed by nutrient-rich oceanic water. On such reefs, you will find corals, sponges and tunicates aplenty, but the stars of the show are the colour coordinated colonies of jewel anemones. It may be a tiny animal, barely a centimetre in diameter, but clustered together in their thousands they create a mosaic of dazzling patterns on the bare granite - nature's answer to a Mondrian Wall.

3. Gardens in the sea

All over the world, seagrass and kelp provide shelter and a habitat for myriad species. Here in the UK, our shallow seas are defined by luxuriant kelp forests, a shifting world of light and shade, ripe for exploration.

Seasoned divers tend to look beyond the kelp line, to the reefs below whose animals are not as dependent on sunlight as seaweed. Still, it's hugely rewarding to explore the reef in this borderland, where the world of vegetation gives way to the specialised invertebrates of the reef.

BSAC clubs sometimes visit kelp forests in their search for historic wreck sites, but you can also enjoy some rewarding animal encounters in the shallows, where camouflage specialists such as seahorses, cuttlefish or pipefish mimic the swaying fronds of seaweed.

Don't believe the old myth that you won't see any fish when diving in British seas. In fact, the overall biomass is far greater than tropical seas, because our oxygen-rich water is packed with energy. It's just that fish spotting can be tricker in green water, so you need a good torch to make the most of it all.

Fish love shipwrecks - ask any angler. On any UK wreck, you are likely to see conger eels peering out from the shelter of the boilers, while silver pollock move around the ribs of the decaying hull. By the end of summer, many wrecks along the South Coast have attracted immense schools of bib, their burnished flanks shimmering in a diver's torchlight. Meanwhile, the reef itself comes alive with colourful fish such as the ballan wrasse, and smaller, bottom-dwelling dragonets and gobies. You'll run out of space noting them all in your logbook.

5. Weird and wonderful below the waves 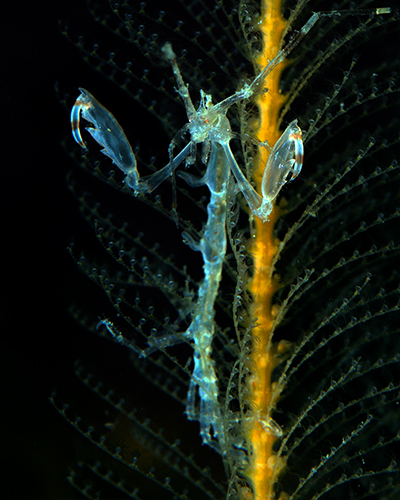 Muck diving was conceived in South East Asia, where divers eschew pretty coral reefs in favour of rubble-strewn sandy slopes that are home to unusual creatures. Underwater photographers have identified similar environments in British seas – and we have even stranger animals.

There are plenty of great rubble dives in the UK, but what you really need is a mixture of habitats in close proximity - and for that, you can't beat the sea lochs of west Scotland. Diving facilities are few and far between along these isolated stretches of water, so this is where BSAC's 'dive it yourself' ethos comes into its own.

The rewards are many - you can dive over some of the richest marine habitats, where vast swathes of seabed are coated in brittle stars. You can swim delicately over mudflats, where tiny explosions of silt betoken the presence of squat lobsters or scorpionfish. It's a world of unexpected beauty, where sea loch and firework anemones vie for attention and you never know what awaits you in the green void beyond your torchlight.

There's nothing like a good shark encounter to liven up a dive, even if we all know that most sharks are essentially harmless. British seas are richer in sharks than most people imagine. On any dive there's a chance of finding one of our catshark species; the beautiful small-spotted variant, or its beefier cousin, the bull huss.

Possibly the best encounters are with the blue sharks that appear offshore from Cornwall in the summer, following mackerel migrations. An ocean-going species, the blue shark moves with effortless grace, its iridescent blue skin a perfect match for the Atlantic water. They can be scared off by bubbles, so snorkelling is the best way to spend time with the blues.

Finally, there are the immense basking sharks of western Britain, the second-biggest fish in the sea, reaching lengths of eight metres. Many a summer club outing has been blessed with the appearance of a basking shark at the surface, its mouth open in order to filter gallons of plankton-rich water. British seas offer the best opportunities to see these secretive giants, especially west Cornwall, the Isle of Man and the island of Coll in the Hebrides.

7. Diving island-style in the UK

Offshore islands offer the perfect backdrop for adventurous diving. Isolation from industry and the proximity of deep water create a high-energy refuge, where the water is clear and every inch of rock is coveted real estate for invertebrate life.

Some of our islands have established Marine Protected Areas, which is why places such as Lundy in the Bristol Channel, or Skomer off the Pembrokeshire coast in Wales can boast such an unspoiled environment. Nature thrives above and below the water, so club trips can be as much about camping and hiking as diving.

When it comes to island hopping, you can explore the many islands of the Hebrides, off West Scotland, served by regular ferry services and home to some of Scotland's most celebrated wrecks and reefs. At the very far north, there are the Shetland Islands, where the wildlife is so diverse the area has been dubbed 'Britain's Galapagos'. In Shetland you can dive at the base of some of Europe's tallest sea cliffs, in water with visibility to rival the Red Sea, then surface to an endless sky filled with wheeling gannets.

Forget dolphins – the most fun you can have in the sea is to dive or snorkel with a British grey seal. Young seals are hard-wired to play as part of their hierarchical behaviour. Encounters generally take place in shallow seaweed beds, where pups are establishing their place in pinniped society. 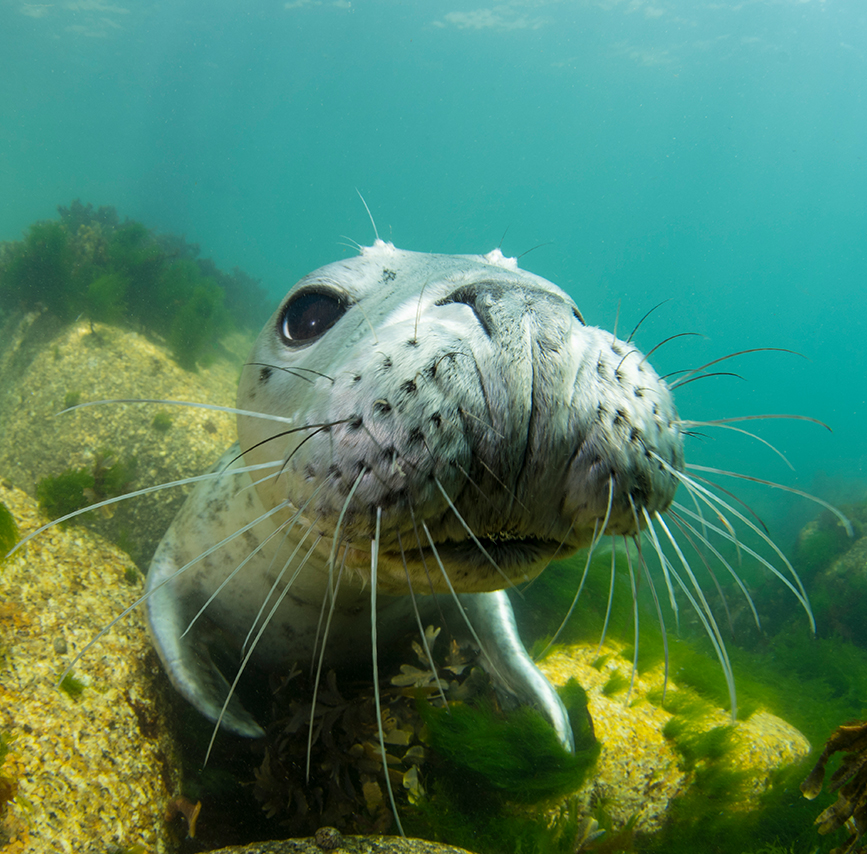 The best places to dive with grey seals are the Farne Islands off Northumberland and Lundy Island in the Bristol Channel. Both are regular fixtures on BSAC club itineraries and offer a range of wrecks and reefs for those seeking variety.

The key to a good seal encounter is not to be overly eager in seeking it out. If you swim directly towards a seal, it will retreat. Instead, the diver should busy him or herself in some other activity, ostensibly ignoring the seals. This often seems to trigger them into 'play' mode, which varies from gentle fin-nibbling to hugging your legs with those dextrous flippers. You will fall in love.

Just remember, the seal should always feel in control, so no chasing, grabbing or holding. You may be tempted to pet the seal like a puppy, but take a good look at those wolf-like incisors, and remember that these are powerful wild animals that will bite if they feel threatened.

9. Scuba diving under the boardwalk

There's a long tradition of diving under piers, bridges and jetties all over the world. It's a type of diving that started in Britain in the 1950s when BSAC divers began exploring easy-to-access shore dives such as Swanage Pier in Dorset or Trefor Pier in Wales.

These are just two of the working piers that see regular groups of divers returning year after year to explore the shadowy world below the day-trippers. The prime motivator is ease of access – you park, kit up, buddy check, and jump in – but these sites wouldn't be so popular if there weren't great things to see.

The secret lies in the range of habitats –­ seagrass and kelp dominate the area around the pier, but in the dark zone below the structure, the vegetation gives way to sand and rubble.

There are also the stanchions, providing a holdfast for invertebrate life and shelter for fish. It's a photographer's dream, an underwater studio that is itself a living entity - look out in particular for the tompot blenny, a feisty little fish that has become an emblem of UK diving. 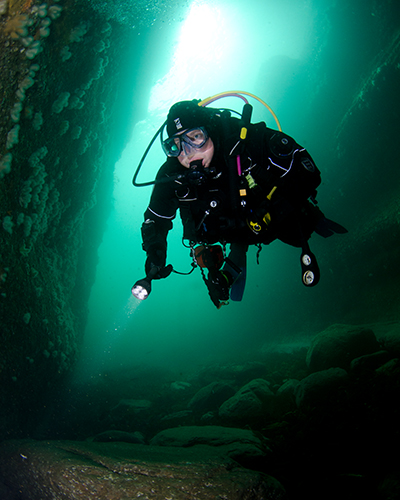 While BSAC doesn't train cave divers, but its courses do cover overhead environments and the considerations for entering caverns. The difference between a cave and a cavern? With a cavern, you must always be able to see light streaming in from your entry/exit point. Caves, by contrast, are entirely dark... but you need torches for both.

A cavern could consist of a big overhead arch such as Durdle Door in Dorset, or a deep cut into a cliff, like the passages below Noss Head in Shetland. You need benign sea conditions, or else the swell may thump you around inside the cavern. If you're trying a cavern for the first time, you should be relying on the knowledge of your club and the judgment of your Dive Manager that you are ready.

Why dive in these eerie places? Divers say they relish the sense of space, and of entering a world of calm and stillness. At Sugar Loaf Caves on the Isle of Man (pictured right), you emerge from the gloom of the cavern system into a bright expanse of water frequented by diving guillemots. Everyone comes up smiling.