To snorkel or not to snorkel 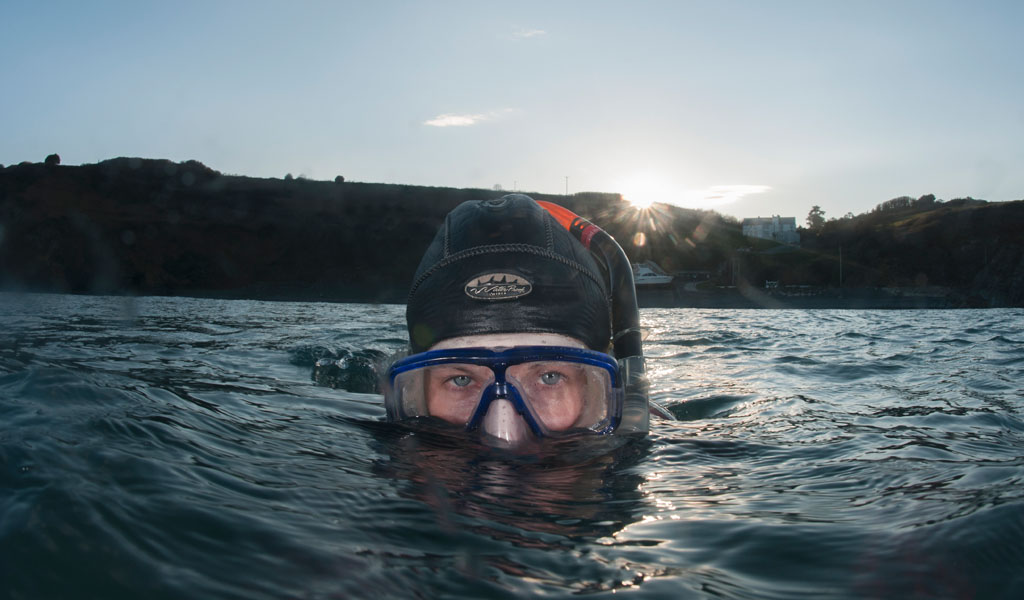 The first rule of snorkelling is to keep it safe, and while Andy Torbet has a reputation for being a bit of a daredevil, he uses a firm set of rules when he takes to the water.

I'd planned to write this month's column on a little jaunt to Brachlinn Falls just North of Stirling. I’d heard about the site through some wild swimmers I knew (always a good resource for discovering un-snorkelled sites). They’d described the small set of waterfalls as ending in a large pool, deep enough to jump off the rocks safely with crystal clear waters. It’s a well known beauty spot and has an ornate footbridge over-arching the falls built in 2004 after the old bridge was washed away in a huge flood.

I trudged the 10 minutes from the car park in the pouring rain. The meteorology should have given me some clue as to what to expect. My concerns were confirmed before I sighted the falls with the roar of white water growing louder the closer I approached. The waterfalls were far from idyllic and the pools would have been better used to throw in dirty laundry than a wild swimmer. These were not prime snorkelling conditions.

I give a lot of talks to the general public and always talk about snorkelling; how accessible a way it is to explore the underwater world. I encourage folk to go out into the rivers, lakes and shores of Britain but, I caveat, we must apply some common sense to the conditions.

So when shouldn’t we snorkel and how can we prevent making a bad decision?

If you’re considering snorkelling in a river, it’s useful to check the rain forecast. Not just for the day you’re heading out but also for a few days before to see what’s been coming down in the area as it all trickle-feeds into the river. If there has been a lot of rain expect the river to be up. And the more rain the faster the flow. I’ve snorkelled rivers in flood, it’s like a drift dive, but only if there were no underwater hazards, the banks were accessible and usually if I’d snorkelled it in more sedate conditions. Apply some common sense – if there are trees / car / houses floating down it may be prudent to humbly retire to the pub.

Following on from above, if you are thinking of snorkelling in a river which you are unfamiliar with have a look at a map to make sure there is no weirs, waterfalls or any other hazards downstream. Hopefully the flow will be such that you could fin to safety if you need to. But it’s best not to need to.

Marine currents can be dangerous and sweep you out into deep water or along the coastline. As snorkellers, with a whole-body buoyancy device and fins, we are better able to deal with this than swimmers, but it’s best to check dive guides, sea charts and local marine information to get an idea of tidal streams and patterns, just as you would for a dive. Strong currents do not mean you can’t dive a site, but it may restrict you to slack water or to plan on a drift snorkel, where your entry and exit are different locations.

I’ve promoted snorkelling all year round in this column, but you have to bear in mind that the water, especially fresh water, will be much colder. Obviously a good exposure suit will help, but  Water Immersion Response (elevated heart rate, gasping and breathlessness) can still occur as the water initially trickles into your suit. Consider entering where you can stand up and allow your body to acclimatise rather than jumping in.

Check the winds not just for strength, but direction. There are some great shore snorkels where access becomes impossible with even a light on-shore wind (for example, Chesil Beach in Dorset). Also bear in mind that surface waves effect snorkellers more than divers, from water splashing down your snorkel to feeling seasick.

I once snorkelled all the way out to the middle of Loch Ness. The thick grey mist that blanketed the water meant I could no longer see any land. It was an unplanned and disconcerting experience. Think about the topside visibility if you’re planning on heading further from shore.

Images in this online version have been substituted from the original images in SCUBA magazine due to usage rights. Featured image by Jane Morgan.