The spurdogs of Loch Etive 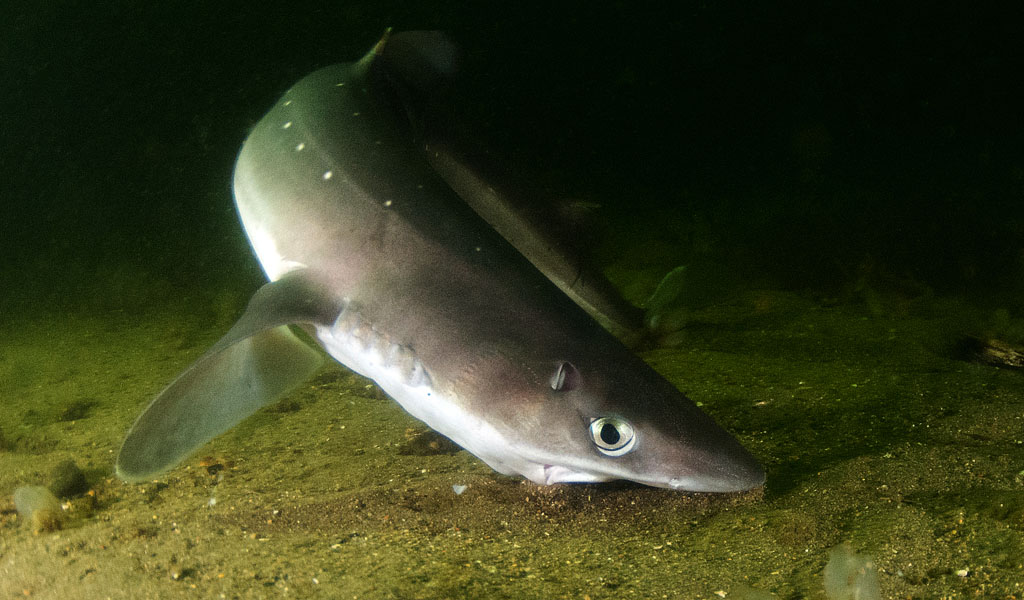 Underwater photographer Lawson Wood went on an unusual shark-spotting encounter off the west coast of Scotland. Has he found the next big wildlife experience in the British Isles?

Glen Coe and Glen Etive cradle Loch Etive all the way to the sea near Oban on the western shores of Scotland. This sea loch is one of the most picturesque on the west coast. It is around 27 kilometres long, from the ancient ruined pier to where it joins the Firth of Lorn. The loch’s dramatic exit to the open sea is framed by the incredible Connel Bridge, which overlooks the dramatic Falls of Lora.

Here a tidal race is created where a narrow hard stone sill comes to just below the water’s surface and the strength of the tide actually creates a type of waterfall as the tide level in the Firth of Lorn drops below that in Loch Etive. Similarly on an incoming tide when the tide level is greater on the outside of the rocky ledge at Connel there is a massive waterfall into Loch Etive as thousands of tonnes of nutrient-rich water is funnelled into the loch. There is a small and rarely used road that runs most of the way down Glen Etive to the old pier at the head of the loch. The pier was once used as a stopping off point by a small ferry whose passengers would disembark to a horse and carriage to explore Glen Coe. There are three deep basins in the sea loch, with depths reaching to 150 metres; but for the most part underwater it is a typical west-coast sea loch with steep, muddy slopes, interspaced with small islands surrounded by mudflats.

Over a number of years, fishermen and sea anglers have attracted the attention of marine scientists at the Dunstaffnage Marine Laboratory for their catches of spurdogs in the Loch Etive area. These small sharks were always fished on a catch and release scheme and the researchers thought that this little British shark deserved a closer look. They were hoping to discover more about its habitat and habits, and why Loch Etive was so important for the Scottish population of these fascinating sharks.

The spurdog (Squalus acanthias) is a small species of shark found in a number of temperate locations around the world. It has a number of common names such as the spurdog, spiny dogfish, piked dogfish, spotted dogfish, rock salmon and white-spotted dogfish. The species is considered to be vulnerable by the International Union for the Conservation of Nature because it is prone to migrate in large numbers and entire schools can be caught in one cast of the net by commercial fishing fleets.

This small shark can grow to around 2m long but is more commonly half that size. It is found in coastal waters, often close to the surface at night but as deep as 200m at other times. They are more commonly found on or near the seabed and are regarded as scavengers, so will be attracted by oily smelling, dead fish.

Researchers discovered that there was a resident population of spurdogs in Loch Etive and after capturing and tagging a few they were able to discover a distinctive migration pattern linked to breeding behaviour in and out of the loch. As the plankton growth increases in the spring and autumn, there are more movements and tagged sharks have been discovered to travel a fair distance, it appears that they stick quite close to their respective areas of site association, possibly to breed. Spurdogs are found in the Mediterranean too, but again, these populations appear to stay within easy distance of their home zone.

Shane Wasik of wildlife adventure company Basking Shark Scotland became aware of the work being done at the Dunstaffnage marine lab through his involvement in research on the basking sharks that are found in huge congregations on the west coast of Scotland. Shane asked the researchers how he could help and be involved in the research programme. At the time, sharks were being caught on baited lines, to collect information on size, sex, characteristics, distinguishing marks and so on. Shane worked out that by placing a baited basket near the seabed he could also attract the sharks. The first trials of the method have proved successful in gauging how observations by divers and underwater photographs could help further research on these curious little sharks. 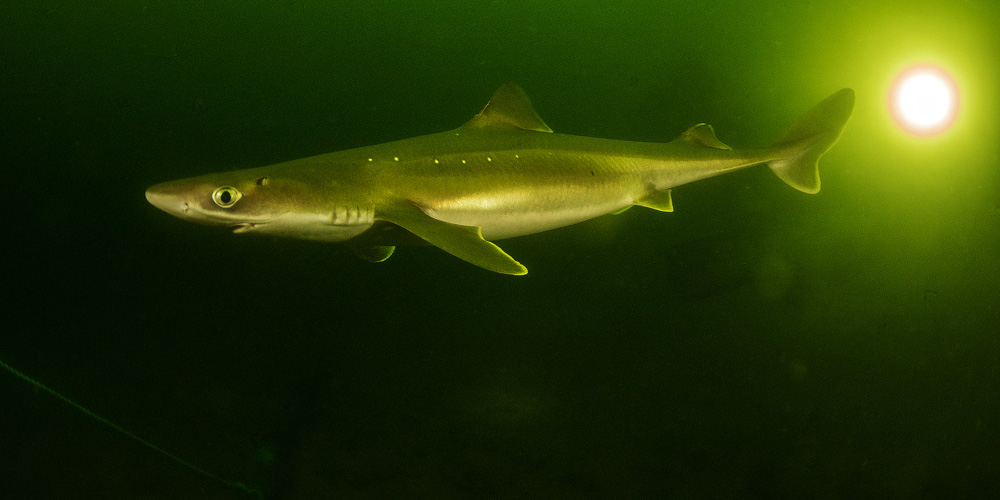 What makes a spurdog?

Spurdogs have the following characteristics:

Similar species include tope and smoothhounds.

Shane approached me, and fellow underwater photographer Mike Clarke, to take part in the first trials to bait and attract the spurdogs. On our first attempt, we launched from Dunstaffnage Marina just north of Oban and after a short run into Loch Etive under Connel Bridge, we set the baited basket in around 9m in a place where sharks had been caught recently in the past. Sadly we had no luck that first drop, although an earlier trial caught half a dozen of these zippy little sharks. We were, however, treated to a huge array of West Coast sea loch critters including thornback rays (Raja clavata).

As there was an ebbing tide, we thought there was a fair chance that the sharks had moved out of the sea loch into more open water in search of food, so a second location was chosen near our home base, where the tide swept into a sheltered bay. The bait bag was duly lowered and an hour later we were treated to several sharks swimming around the bait or resting on the seabed. The scent of oily fish in the water also attracted small spotted catsharks, also known as lesser-spotted dogfish, various rays, flounders and an army of spider crabs, hermit crabs and other small critters. The sharks were very skittish and came close to the bait bag, making photography rather difficult, but those sharks that rested on the seabed were incredibly docile, allowing very close encounters. One of the sharks had a small spider crab wandering across its back, perhaps this was a kind of cleaning station for spurdogs.

Undoubtedly these are just early days in this research, but the preliminary work carried out by Shane may well lead to the next big – or little – shark encounter experience to be enjoyed in British waters. You may or may not agree with shark baiting for tourism and underwater photographers, but shark baiting for science or tourism in many areas of the world is tried and tested and has become a successful technique to bring visitors to find out about an area’s wildlife and benefit its economy. In the UK you can see species including blue sharks off the coast of Cornwall using a baiting technique; clearly baiting works for the Scottish spurdogs too.