Scooter snorkelling: the need for speed 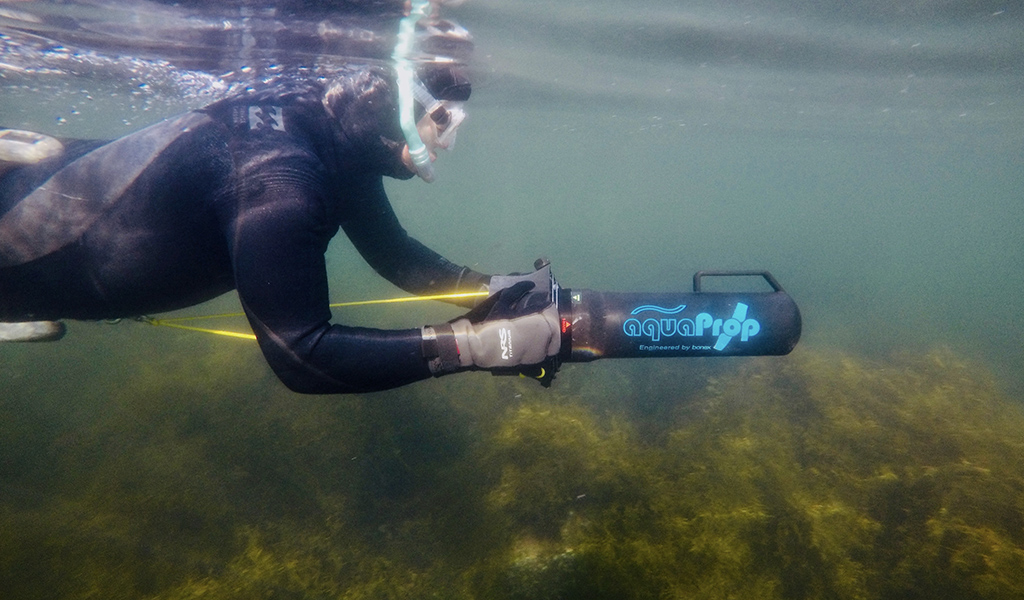 Looking to unwind between cave dives in Southern France, Andy Torbet makes good use of a diver propulsion vehicle while snorkelling.

One of the great advantages of snorkelling is its simplicity. The streamlined, minimalist equipment and a lack of any need for in-depth dive planning are a huge bonus. Perhaps I should qualify that statement: an appropriate amount of forethought is always sensible for any type of dive, but if you contrast the world of snorkelling with technical expedition diving, it’s pretty clear which is the simpler. Sometimes the use of all that extra equipment is worth all the effort, and sometimes you have no choice.

On a recent trip to southern France, investigating some potential cave diving sites ripe for further exploration, I took time out to unwind with a simple snorkel. We had been humping rebreathers, large bailout cylinders, diver propulsion vehicles (DPVs) and even an underwater habitat up and down the French countryside on foot. So, to simply cross the road to the crystal-clear waters of the river running past our Airbnb was a salve to the efforts of the day.

The water was slightly chillier than the caves we’d be diving in so, despite the reduction in agility, I was glad of the drysuit. I seldom snorkel in a drysuit, but it only really becomes a hindrance if you’re trying to duck-dive and freedive. When, with no weight belt on, you are happy to bob around on the surface, it’s still a useable tool. Besides, I had little need to be super-streamlined or fin-ingly efficient, since I had brought a more technical mode of transport to the party.

The DPV allowed me to move upstream against the gentle current, relaxing as I was taken for a ride over the white sand of the river bed. The visibility was a stunning 10+ metres and the water a bright emerald green, unlike anything I’ve seen in the UK. I passed under the arches of smaller medieval French bridges to reach Le Pont d’Herault, an impressive old stone bridge crossing the river Herault.

The journey upstream was pleasant and relaxing, but not nearly as much fun as what happened after the turnaround point. The landscape remained the same but my speed was now a combination of DPV power and that of the flowing river. I sped up from an estimated two knots to a rocketing six. The return journey to my start point was over too soon, but I left the water with a grin on my face and feeling re-energised.

It’s worth noting DPVs have the power to drag you underwater if you point them downwards. In this case, in a drysuit with no weight belt, I was very buoyant but could still have left the surface had I chosen to. DPVs are easy to control but, especially when snorkelling, make sure you know how yours operates and, most importantly, how to stop.

Scooter-snorkelling may never catch on, largely because the size, weight and expense of a DPV detracts from many of the best assets of snorkelling. I have written in this column about snorkelling for science, for conservation, for wildlife, for friendship, for health, for adventure, for exploration and for filming... but let us not forget one of the most beneficial reasons to snorkel – for fun.

Check out the tailored support for clubs, centres and members during Covid-19.