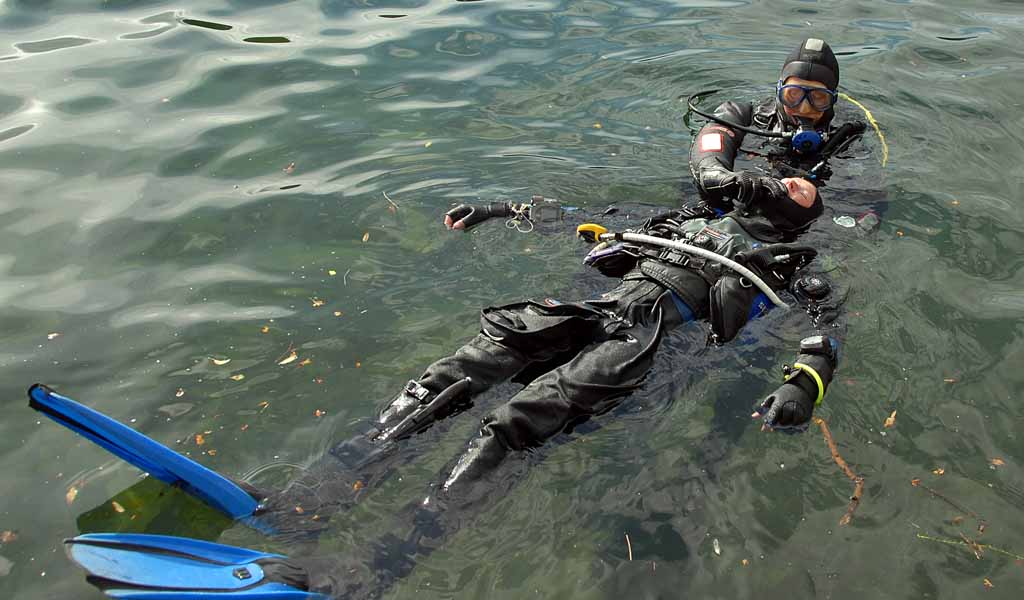 There is mounting evidence that immersion pulmonary oedema is responsible for in-water fatalities often ascribed to other factors. Here, Dr Peter Wilmshurst sets out the facts divers need to know.

Immersion pulmonary oedema (IPO) probably causes more deaths in scuba divers than any other condition. IPO also affects surface swimmers, including snorkellers. Most deaths in triathletes occur during the swim phase of the event and there is evidence that a major cause of those deaths is IPO. (You may also see IPO to IPE because oedema is spelt edema in the USA.)

IPO was first reported in medical journals about 30 years ago. It was not recognised before then, because at post mortem examinations the findings are very similar to those in drowning. In both IPO and drowning the lungs are heavy and waterlogged so that when they are cut open, the lungs are filled with bloodstained froth. Some pathologists still mistake IPO for drowning.

Therefore, the precise incidence of deaths from IPO is unknown. Most information about it comes from survivors, some of who had recurrent episodes of IPO. One survey reported that 1.1 per cent of scuba divers had one or more episodes of IPO and 1.4 per cent of triathletes had it during some events.

To understand how and why pulmonary oedema occurs, we need to remember a little about heart and lung function. The lung alveoli are microscopic air sacs surrounded by capillaries. There is only a very thin layer of tissue separating each air sac from the blood in the capillaries that surround it. The membrane is thin enough that it allows carbon dioxide to diffuse easily out of the blood and oxygen to diffuse in, but it prevents the water in the blood plasma from diffusing out to fill the alveoli. However, if the heart is damaged so much that the increased back pressure from the left side of the heart causes the blood pressure in alveolar capillaries to increase to a critical level, some of the plasma is forced across the thin membrane into the alveolar sacs to cause pulmonary oedema. 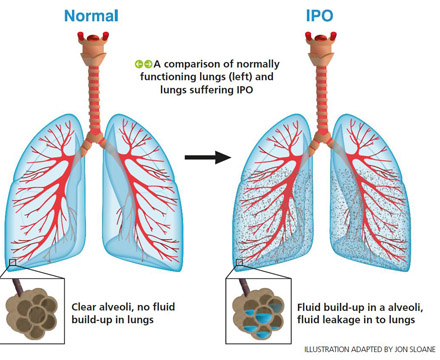 IPO is different because it usually occurs in fit people, but the cause is also high pressure in the alveolar capillaries. That high pressure is not usually because the heart itself is diseased. There are a number of contributory factors and the fact that a diver is fit and has a healthy heart does not protect him or her from getting IPO.

I have seen IPO in very fit divers, including a member of the Special Boat Service, who had phenomenal levels of fitness out of the water when running on a treadmill. IPO has also been reported in US Navy Seals, French navy divers and young recruits to the Israel Defence Force.

A major part of the reason why some fit people get IPO is that when people are immersed, the increased hydrostatic pressure on their limbs from the surrounding water pushes more than half a litre of blood back to their chests, which increases the blood pressure in their alveolar capillaries. The elevation in capillary pressure is increased when immersion is in cold water, because cold causes constriction of peripheral blood vessels that causes back pressure on the heart, which is transmitted to lung capillaries. People who have high blood pressure tend to constrict their blood vessels more than people with normal blood pressure. If the cumulative effects of these factors cause alveolar capillary pressure to exceed a critical level, plasma is forced into the alveolar sac as oedema fluid.

Pulmonary oedema in the alveoli makes it is more difficult for oxygen and carbon dioxide to diffuse into and out of the alveolar capillary blood. As a result, divers or swimmers with this condition become breathless, start to cough and, in severe cases, may cough up frothy or bloodstained sputum. As the condition progresses and hypoxia (reduced oxygen content of blood) worsens, the amount of oxygen reaching the brain is reduced and divers may behave oddly as hypoxia affects brain function. If hypoxia is severe enough, unconsciousness occurs. If a scuba diver is hypoxic at depth, the hypoxia will worsen during ascent because ascent reduces the partial pressure of oxygen in the lungs and hence in arterial blood. So unconsciousness during ascent is a particular concern in a diver with hypoxia. In severe cases, hypoxia is sufficient to cause cardiac arrest and hence death.

A number of factors increase the risk of IPO. People with pre-existing heart disease and hypertension have an increased risk because their alveolar capillary pressures are often higher than normal before immersion and they get more vasoconstriction on cold exposure than other people. Older divers also tend to have higher alveolar capillary pressures, so it does not require a great increase in the pressure for critical levels to be reached. Immersion in cold water is a recognised risk factor for getting IPO because constriction of blood vessels is greatest in the cold, but IPO can occur in tropical water too. Exertion and stressful events during immersion increase blood pressure in the alveolar capillaries and their additive effects can be enough to cause IPO.

I am particularly concerned that many divers overhydrate with fluids before a dive, in the belief that it will protect them against decompression illness. The evidence that it protects is not convincing. In contrast there is unequivocal evidence that excessive hydration increases the risk of IPO in both divers and swimmers. Overhydration has an additive effect on the increase in alveolar capillary pressure resulting from immersion. So I strongly advise divers not to overhydrate before diving. Instead, I think that divers should have a drink as soon as practical after leaving the water.

There is also evidence that inspiring against a high negative pressure when diving can increase the risk of IPO. That is because a high negative pressure in the lungs during inspiration has the effect of sucking fluid through the alveolar membrane. High negative pressures can occur when diving with a rebreather with a back mounted counter-lung. Nearly all cases of IPO reported by the French Navy occurred in divers with back mounted rebreathers. I have seen a number of very experienced divers who had IPO (some had recurrent episodes) when they switched from open circuit diving to using rebreathers, but who had no further attacks after switching back to using open circuit scuba again.

Warning signs… and what to do

An important danger sign is that a diver who becomes breathless as a result of IPO may mistakenly believe that their equipment is not working properly. If a diver switches their demand valves or uses a buddy’s secondary air supply, or if a diver with a re-breather is purging his or her system, that may indicate the onset of IPO. Coughing or rapid respiration, which may be obvious from the exhaled bubbles, may also indicate IPO.

When a swimmer or diver has breathlessness or other features of IPO, the immediate action must be to get them out of the water. That immediately reverses the hydrostatic effect of immersion – so blood moves out of the chest into their limbs, which reduces the pressure in alveolar capillaries. A diver who is breathless at depth must not be allowed to surface alone. The ascent can cause a rapid reduction in the partial pressure of oxygen in the blood and brain and the diver may become unconscious in the short time it takes for him or her to surface.

Provided that the casualty is conscious when out of the water, they should be kept still sitting in an upright position, which improves gas transfer. They should be kept warm in order to reduce vasoconstriction. It is essential to given 100 per cent oxygen, if it is available. The casualty should be taken to hospital, where treatment with drugs and, in severe cases, mechanical ventilation, may be required to get the oedema fluid out of their lungs.

A diver who has had IPO is at risk of further episodes. In most cases, a return to diving is too great a risk. However, investigation is important because occasionally the individual has a cardiac problem that may present other risks to their health, including a risk of death. Therefore, every diver who has suffered IPO or has had symptoms that might have been the result of IPO, should be reviewed by a diving medical referee or cardiologist with knowledge of diving medicine. Occasionally the investigations reveal a medical condition predisposing to IPO that can be corrected to allow an affected individual to return to diving safely. There is on-going research – including a review of BSAC's incident database – into the various factors causing IPO and the mechanisms involved.

Join BSAC and you'll be helping us to develop and promote the best practice in diving safety. Plus, you can 'opt in' to get the latest safety updates straight to your inbox.

The latest guidance for divers, including snorkellers, on the condition Immersion Pulmonary Oedema (IPO) and how to avoid, recognise and provide first aid treatment.