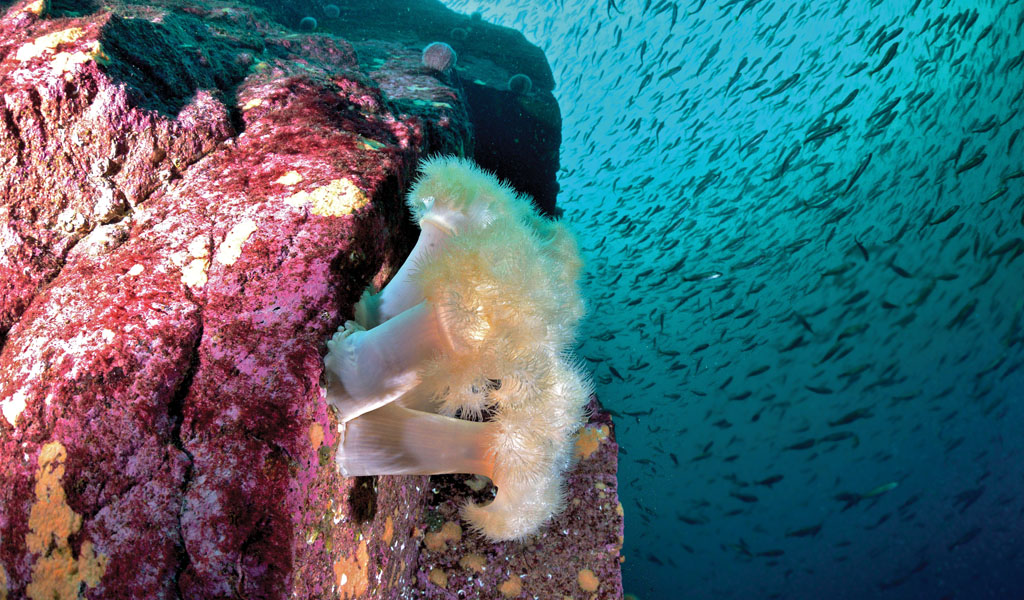 We rejoin Anita Sherwood and her team from Worcester BSAC as they continue their RIB diving tour of Shetland, desperate for a break in the weather.

The morning came and the wind was relentless. It took all of us working together again to get our individual tents down. I had to stay inside and weigh it down at one point, while everyone dismantled it around me. The tents were eventually packed away and thankfully we did not lose any to the sea.

The previous day I had found a small alcove in the rocks, sheltered from the wind, which I thought would be a good spot to have breakfast. This proved to be quite civilized, with bacon and baked beans followed by hot chocolate. We decided to wait out the wind, which was due to drop, in the hope of diving in the lee of Vementry in the afternoon. It did start to subside but the direction had changed, making our location not that protected, so we promptly packed up and left. Just loading up the RIB with all the kit took a lot of effort.

The dive of the day was on the Holmes of Uyea Sound, which I was hoping would be sheltered, and this proved to be the case. The site was excellent as we dropped down the cliff wall through a shoal of encircling saithe. A mid-water guillemot darted past, followed by a gliding thornback ray on the seabed. Incredible, all in just five minutes. It was such a good dive with so many choices. As you headed out of one gully, there were two more! At the end of the dive, an octopus made an appearance, which is always good to finish on a high.

Finally, we headed back to Aith slip to find a small scene of destruction. All of our dive boxes had been blown off the top of the Shogun during the night, even though they were securely strapped down. A kind local had collected the boxes and weighted them down with an old tyre to stop them heading off into the stormy seas.

We re-grouped and a quick check of the forecast revealed the wind was going to drop to a very welcome Force 3 westerly for the evening – our first chance to see sunshine was imminent. With much persuasion, I managed to convince the group to wild camp another night. We recovered the boat at Aith slip and headed to Yell Sound to launch at Housetter slip. The sun came out as predicted and we camped at Eastwick, an old ruined village on the peninsula. A much-appreciated walk before dinner to the lighthouse to watch the sunset, followed by Katie’s gorgeous pasta Bolognese. This was the first night we hadn’t been hit by severe storms and spirits were high.

Photo by Anita Sherwood - Launching the RIB at Housetter slip 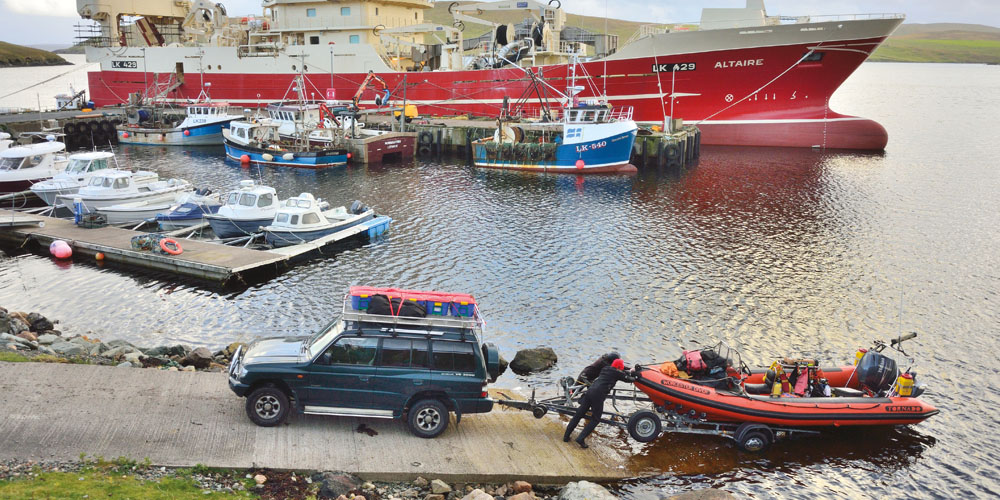 Breakfast was spent watching the seals frolicking in the bay – so cute! However, it wasn’t long before the wind picked up again (such a short break), which made the diving hard. The first was on Outer Skerry, a drop-off which quite possibly had never been dived before.

It was a similar dive to some of the other scenic sites, with fantastic gullies and cliff walls. There was plenty of life to be found including octopus – you can never have too many octopus! The wind continued so we headed for a more sheltered site called ‘The Taing of Norwick’. Not a dive that I would have picked, but options were running low in these conditions. If you were looking for seafood, then amazing quantities of scallops could be found but for me the underwater topography didn’t match up to the previous sites.

The final evening of the trip, we were all in desperate need of a shower and a civilized meal around a table. The Housetter slip had a shower and the village of Brae had a restaurant – perfect! Kelly and Andrew of Shetland BSAC had kindly offered the use of the boat house again at Lerwick.

At last… a perfect day

The last day finished on a high, as the wind had finally swung around to northerly, allowing us to dive out of Lerwick and do some of the popular sites. The first was Fraoch Ban where on 15th August 1999, in calm seas the movement of the fish rushing from side to side in unison actually toppled the boat and it sank. The fishermen lost their boat, the catch of sand eels and nearly their lives. Today the ship rests on the port side rising 5m off the seabed and measuring 15m in length.

We descended the shot, hoping the GPS references were accurate and thankfully they were, as we dropped down to 20 metres and paused for a while. I had never seen such good visibility. You could actually see the silhouette of the whole ship from stern to the bow. Below us a welcoming committee of plaice were gathering.

This was surreal and the image of diving a Red Sea wreck popped into my head. The ship was certainly a picture, with Disney-esque qualities. The stern was marked by a huge cargo winch, which would have helped drag up all of those sand eels. Cables dangled down, covered in plumose anemones, along with huge clumps of squid eggs. The wooden decking is usually one of the first areas to disintegrate but the boards were still fairly intact, covered with various critters.

At midships, on the top at the starboard side was an entrance inside the wreck, although both of us felt it was just too small and not worth the risk. Next to this was the bridge, with some of the glass windows still intact. You could enter inside with care, but there seemed no need as the view through the opening showed it all. The steering wheel had gone but the steering mechanism was still in place. The floor was covered in debris, along with an old coiled phone cable.

Several plaice seemed to be following our progress along the wreck from the sea floor, so we headed onto the white sandy seabed for a gander, then headed for the bow. At midships various mast debris had fallen onto the sand, probably broken off when the vessel hit the bottom. All too soon and we were going to have to leave this wreck behind. I could have stayed down there all day, just watching the fishes. 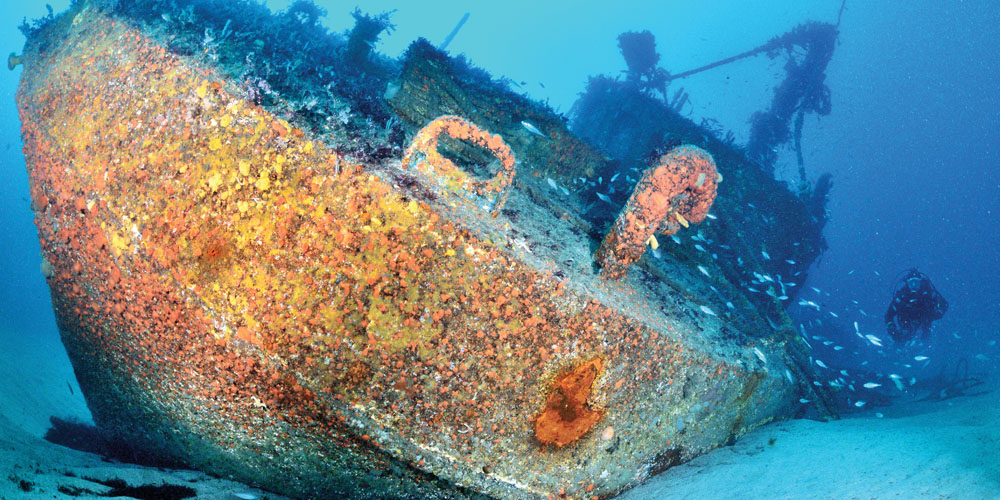 After the dive, spirits were once again high. We decided to head over to view the gannet colony just around the corner of the isle of Noss. A perfect sky rise city towering over 180 metres high with carved sculptured honeycombed ledges and balconies, as if designed for nesting.

Unfortunately, late September is pretty much the end of the gannet breeding season, though you could still see some chicks that had not made the death defying leap into the water below. It would be good to re-visit this area in May / July when the colony is in full swing.

Being a keen nature photographer, I was still eager to grab the opportunity and take a few snaps as I pulled out my telephoto lens (my first chance on the trip so far). Sadly, with limited time and a ferry to catch back to Aberdeen in the evening, it was all too short.

Photo by Anita SHerwood - The gannet colony on Noss Head 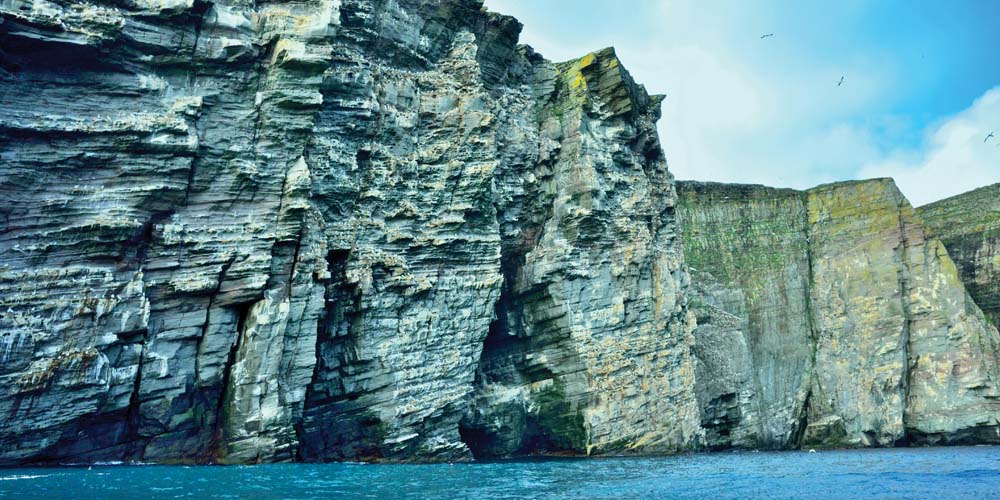 During lunchtime we managed to sneak in a quick dive under the Giants Legs with only 30 minutes spare, which included kitting-up and of course the actual dive. The epic proportions of the Giants Legs are impressive – snorkelling over to the arch I certainly felt tiny. The swell was still pounding through the arch, so it was a matter of dropping down to 4m to escape some of the surface swell, followed by a forward and backward drift dive through the legs to surface on the other side.

It was certainly worth the extra effort. The light faded as we headed down, but the colours of the walls intensified, plastered in anemones. The visibility was good enough to see all the way to the bottom, although the surface was a little too frothy to see the arch above.

Time up and back in the RIB for our final dive of the trip, the Russian fishing vessel of the Pionersk. Without a fully functioning echo sounder this was an ideal dive as the top of the wreck was visible at low tide. The bulky 165-metre-long vessel sank during the night of 31 October 1994 in south-easterly winds of Force 8, gusting to force 9-10.

In rough seas, she dragged her anchor until the fateful inevitable happened and the ship’s bow ploughed into the rocks. During that night Lerwick lifeboat crew managed to rescue the 155 people off the boat.

All survived, although I expect they were a little shaken up. After a careful drop off with us all looking out for any stray rocks or wreckage underneath, we descended onto the bow. The visibility was not quite as good, with a slight milky residue from the previous storms. We passed down through a dense shoal of saithe which obscured the scene ahead. The fish started to disperse, allowing a full view of the wreck. An impressive hawse pipe rested upright virtually touching the surface with the weight of a bulky anchor chain dangling down. One wonders how long this will remain in-situ.

Anchor chain generally dominated the scene where it seems to have breached the Ship’s hull. The Pionersk was covered with the usual dreaded kelp, which at times made it hard to discern wreck from rock. The high rocky walls would also form barriers to finning down the natural course of the wreck, funnelling you into the inevitable dead end, although we often found a porthole down each one!

Eventually after much searching we reached 18 metres, which I believed to be the deepest section of the wreck. We combed around the large chunks of the stern but failed to find the propeller, perhaps still hidden underneath. Finally, it was time to head home. We left a small donation for Kelly and Andrew at the Shetland Sub Aqua Club hut for getting us out of a pickle more than once.

We caught the ferry in good time and sailed back to Aberdeen with no mishaps. My thoughts at the start of the trip were ‘Oh my gosh’ and my thoughts hadn’t changed! Everyone survived (four left and four came back) and we all had the adventure we were looking for, returning with lots of stories for the pub. 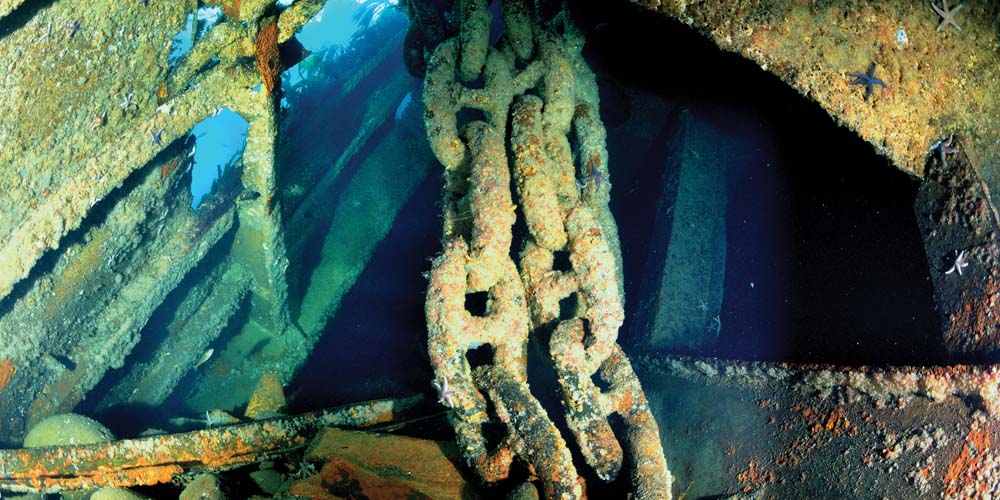 Featured image by Anita Sherwood  -  A shoal of saithe billow past a rocky reef on the Holmes of Uyea, plumose anemones in the foreground.

Explore a list of scheduled training webinars and further interest talks, along with quizzes to test your scuba knowledge.