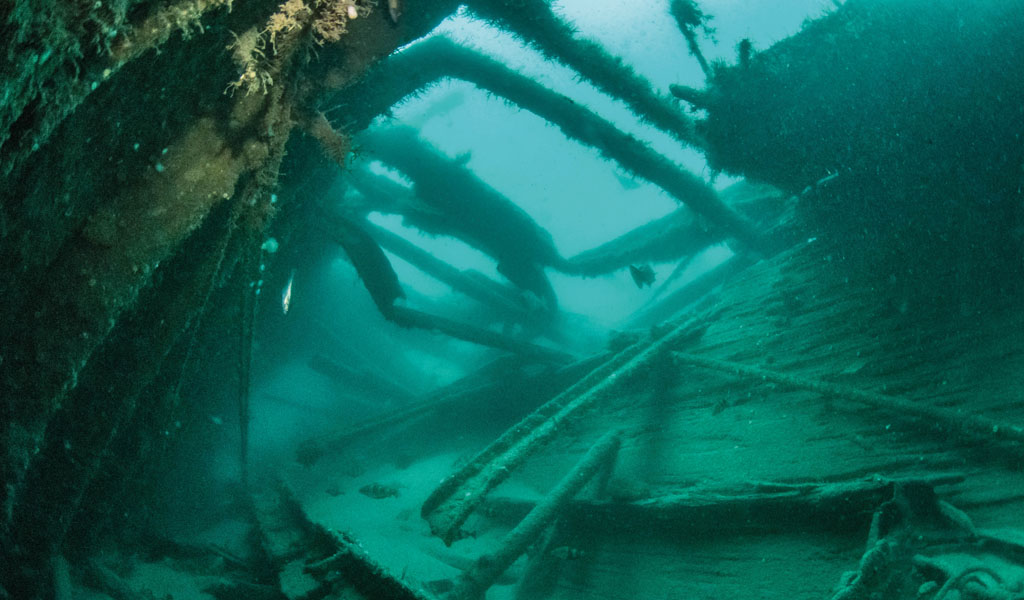 Rick Ayrton of Clifton BSAC was there when the conditions came together for a perfect dive on the wreck of an early 20th-century P&O liner.

Arguably one of the best wreck dives in the UK, the liner SS Salsette is a must-do dive on the south coast of England. But the site in Lyme Bay, off the Dorset coast, is in an area not renowned for great underwater visibility. Recently, the planets aligned, the die all came up six and the toast landed butter-side up: as a result, I experienced a perfect dive on this iconic wreck.

The 5,842-tonne Express Liner SS Salsette, built by J Caird and Company of Greenock, was launched on 2 April 1908 as the second ship of that name in the Peninsular and Orient Steam Navigation Company’s fleet. No doubt because of the oriental links of P&O and the primary route sailed between Aden and Bombay (now Mumbai), she was named after an Indian island. Salsette now forms part of the Mumbai metropolis and is one of the most densely populated islands in the world.

The ship was 134.1 metres long with a beam of 16.2m and her two 10,000 horse-power quadruple expansion engines powered two bronze propellers. She was able to carry 140 first-class and 121 second-class passengers in luxury at a top speed of 20 knots. Had Salsette been a car, she would have been an early model Bentley or Aston Martin, with caddishly good looks and a simmering giant of an engine hidden beneath classic lines.

When launched she was sleek, beginning with a vertical bow and ending with a beautifully proportioned counter stern, looking every bit the aristocrat. Equally well kitted out, she was adorned with quality fittings and attention to detail that has led to a wide range of fascinating artefacts being recovered from her since she was located in 1970.

Of the 500 or so vessels owned by P&O between 1837 and 1970, 78 ended their careers on the seabed. More than half were war losses, often attributable to German U-boat activity. Salsette was one of those casualties when torpedoed by Kapitänleutnant Hans Howaldt of UB40 on 20 July 1917. Howaldt – one of the most successful U-boat captains of the First World War – sunk a total of 63 ships, including many that we now dive regularly in the English Channel.

I have dived the Salsette a number of times. She lies on her port side in 46m, mainly listing about 45 degrees, with her shallowest parts in about 35m. I remember diving here in the late 1980s with a single cylinder of air. Pitch black, I still recall the rectangular porcelain sink that I seemed to spend my narcosis-addled dive swimming around.

I have to admit to experiencing more poor viz on Salsette than good viz. In the past few years, we seem to have gone through endless murky dive seasons all along the South Coast. Patterns change and in the past couple of years, May has proved to be a prime month for great conditions in Lyme Bay and beyond, despite all the talk of ‘May Water’, as people call the plankton bloom that arrives in the late spring.

This year, I was fortunate to join a trip towards the end of May on Wey Chieftain IV, the Weymouth-based charter boat run by Richard Bright-Paul. The early start was worth it for an easy run to Weymouth from my home near Bristol. We left the bustling port in the fast catamaran and headed up the east side of Portland, soon rounding Portland Bill and heading south-west to the wreck site.

You do not get a long dive on the wreck without committing to some decompression. To make the most of a dive on this wreck you need to be happy to dive to more than 40m, and although you can dive on air I would recommend adding a bit of helium to the mix. This time, I chose a mix of 10/52 as the diluent for my Inspiration rebreather. With a clear head, I wanted to safely enjoy the dive and remember considerably more of it.

Richard spent time putting the shot exactly where he wanted it, then gave us all a comprehensive briefing. As with all slack water dives, it seems to be 'hurry up and wait'. Somebody starts to kit up, and soon the boat is a whirlwind of activity, then we are all sat like restrained aliens and told to wait another 10 minutes, until we can stagger under the weight of our kit to the exit point, all the while sweating under the hot May sunshine.

The relief when I finally got in was only tempered slightly by the cool 11°C water. Soon my weightlessness transformed me into the aquanaut I wanted to be. I could see straight away that this dive was going to be special – the shotline seemed to go a long way into the depths, framed by dancing light rays. After a rebreather check with my buddy, we started our descent and at just below 20m we could see the outlines of wreckage at least 15m further down.

After a while, I let go of the shotline and dropped onto the wreck. I was at once amazed at the spectacle the wreck stretched away from me in all directions, my buddy must have been nearly 10m away from me but I could see him clearly and we could signal to one another across the wreckage without needing a torch, although its light was useful to highlight bits of the wreck.

We started by heading aft, where bits of wreckage, that in poor visibility made no sense, suddenly let their secrets out. A beam covered in small white anemones was actually connected to another, which was likely a mast, so this was probably part of a crane for loading the ship. I came across a wheel with ornate serpent-like spokes, it seems to be connected to some hoses and has a turning handle, maybe it was a manual bilge pump?

I could tell I was getting close to the stern and could make out a post with massive bits of metal attached and standing proud. On many descriptions of the wreck a stern 4.7-inch gun is mentioned but what I was looking at was not a gun. When I got closer and could see the whole stern, it became clear that the structure standing proud was the steering quadrant, a substantial bit of wreckage that connects through the hull of the ship to the rudder.

Triangular structures fanned out at the top of the post and these make up the quadrant, ropes or chains would have connected this with the helmsman on the bridge so that as he turned the wheel the rudder would respond. That the structure is so proud of the wreckage is testament to the decay that more than 100 years underwater has wrought on the Salsette. Much of the hull structure has been lost, as each year winter storms take their toll on the rusted metal. Below the stern on the seabed lie plates that have dropped off the wreck, the stern itself is just the flat base of the hull with some ribs poking up like a half-finished fish supper.

Heading forward from here a multitude of swim-throughs became obvious; in lower viz the gaps in the wreckage might be ready to trap the unwary, but on this dive, exits were clearly visible and therefore made for a fantastic trip through the wreck. As we share the wreck with sport fishermen, a fair bit of monofilament is always waiting to snag you, so you need to make sure you have efficient devices to free yourself or your buddy of any entanglement.

After a while, we reached the forward part of the wreck, in the good viz we stood off the bow and admired it. It now lies almost parallel to and a metre or so off the sea bed, whereas just a few years ago the bow was at a 45° angle to the seabed, again illustrating the gradual deterioration of the wreck. I was surprised by the amount of wooden decking that remains, once again this is likely due to the quality of the build of this ship.

Having swum the whole length of the wreck in a bottom time of 45 minutes, it was time to send a delayed surface marker buoy to the surface and complete the required 48 minutes of decompression stops. Back on the boat, there was an air of disbelief, soon followed by the excited chatter and realisation we had just experienced a very memorable dive. 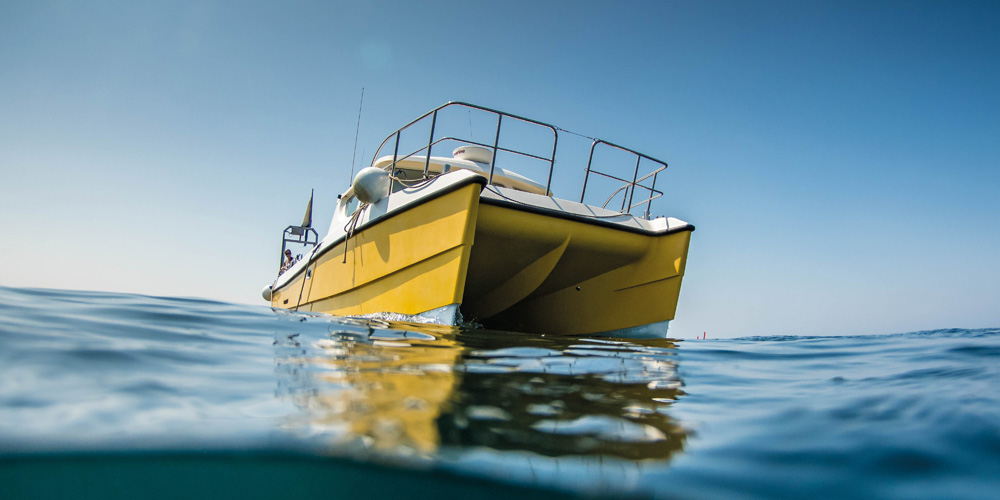 If you are diving from a RIB the nearest launch sites are the slipways at West Bay or Lyme Regis. Skin Deep at Portland Marina (01305 457 343, 07971 977 595) and Underwater Explorers in the business centre nearby (01305 824 555) can provide diving gas. If you need accommodation the Bunker, (contact via Skin Deep) and Hotel Aqua (01305 860 269) are good reasonably priced options that specifically cater for divers. Plenty of other options are available in the area.