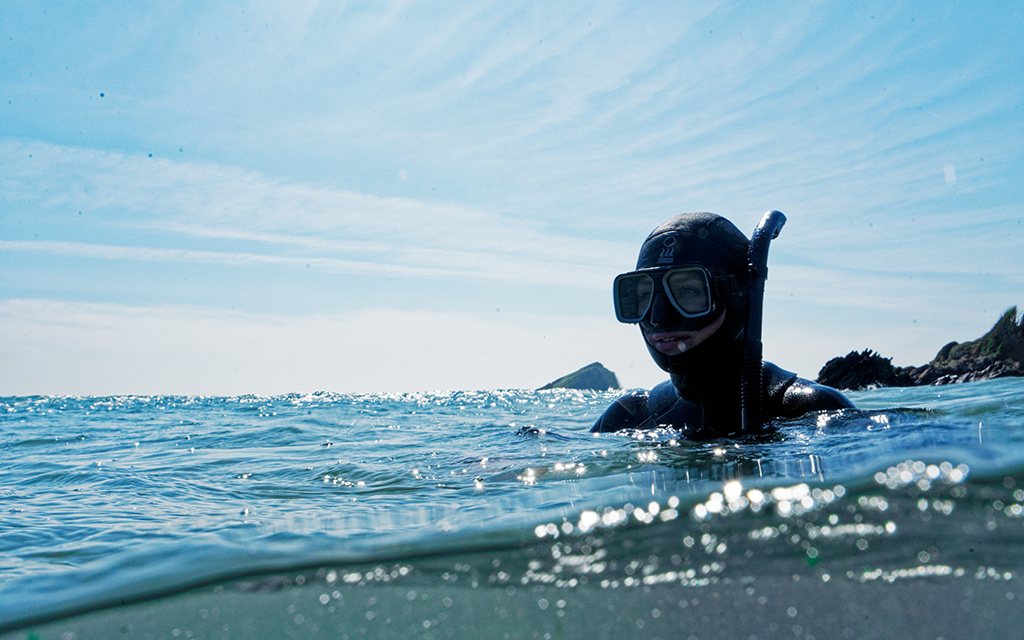 On a filming trip to the Mediterranean, Andy Torbet finds himself lured by the siren call of warm blue water.

A defining factor of my 2011 Britain By Snorkel project was just how much diversity there was in colour across the various waters of the UK, from rivers and lakes to the North Sea and English Channel.

All the same, when the call came to film a new solar-powered yacht in Mallorca for the YouTube channel Fully Charged, I was looking forward to some gratuitous blue water action. Even before we’d left home, I had browsed Google Maps to reconnoitre how far it was from the hotel to the sea. I was extremely pleased to see I could pretty much drop over the back fence and straight into bright blue water. Which is exactly what I did about three minutes after I checked in.

Having done all my diving in the last few years in the UK or inland France, I haven’t been treated to the most impressive visibility. So it was glorious to be back somewhere I could not only see my hand in front of my face, but see someone else’s hand swimming well over 10 metres away.

Equally pleasing was the 24°C water temperature. Not for me the usual dress of multiple undersuit layer, drysuit and gloves. I didn’t even need a five-millimetre wetsuit. This time it was pants-only snorkelling.

Although UK diving and snorkelling can be incredible, it can also be hard. Our waters are relatively cold, lower in visibility, we have some big tides and unpredictable weather. We need to consider wearing thermal protection, extra gear, weight (to compensate the thermal protection) and more. But all this means that if you can dive in the UK, you can dive anywhere. And you’ll probably find it pretty easy when you get there.

This ease allows lots of capacity for other activities without task-loading. Tasks like photography, filming… or scootering!

We spent a few days on board the luxurious Silent Yacht, a new solar powered yacht, where not only the twin propellers were solar powered but so was the desalination system, cooker, lights, hot water, fridge and coffee machine. They gave me the opportunity to make use of the boat’s small DPV to scooter around the underwater vistas of the cave we had moored up on to grab some footage of the boat, myself and what lies beneath.

The laws in Mallorca, commendably, do not allow ships to drop anchor in anything other than sand to protect reefs and seagrass. The white sand beneath the yacht reflected the copious sunlight, which only increased the sense of visibility and warmth. And the waters were not bereft of wildlife, with plenty of saddled sea bream. Urchins and starfish also lurked in the crevices of the small rocky outcrops.

Even an avowed UK diver/snorkeller such as myself has to admit that sometimes there’s nothing like a swim in warm blue water.

You can view this episode of the Fully Charged show on YouTube.

Article by Andy Torbet first published in SCUBA magazine, Issue 129 October 2022. Images in this online version have been substituted from the original images in SCUBA magazine due to usage rights.