Some places seem to exert a permanent hold on the imagination. For Andy Torbet, such a location can be found in the Scottish Highlands, not far from Glen Coe.

Any good snorkel site is worth revisiting. Not just to repeat a great experience but to potentially see it in different conditions that change its very nature.

Torbet on the Tube: Snorkelling in the Scottish Highlands

The wildlife you would expect to see may change, especially if some of the major attractions are transitory and seasonal, such as basking sharks or the pupping of our grey seals. Wrecks might be embraced in the warmer months by a profusion of kelp and teeming with the animals. But come the winter this marine forest dies back and the lines of the vessel’s decaying structure become more distinct. It changes your focus. 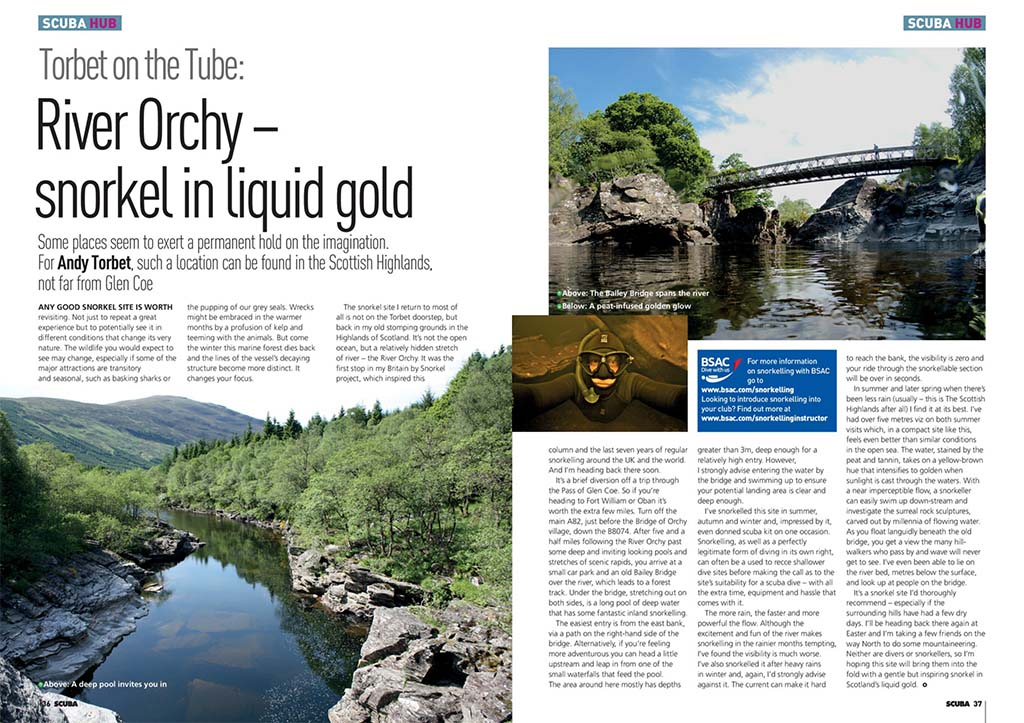 The snorkel site I return to most of all is not on the Torbet doorstep, but back in my old stomping grounds in the Highlands of Scotland. It’s not the open ocean, but a relatively hidden stretch of river – the River Orchy. It was the first stop in my Britain by Snorkel project, which inspired this column and the last seven years of regular snorkelling around the UK and the world. And I’m heading back there soon.

It’s a brief diversion off a trip through the Pass of Glen Coe. So if you’re heading to Fort William or Oban it’s worth the extra few miles. Turn off the main A82, just before the Bridge of Orchy village, down the B8074. After five and a half miles following the River Orchy past some deep and inviting looking pools and stretches of scenic rapids, you arrive at a small car park and an old Bailey Bridge over the river, which leads to a forest track. Under the bridge, stretching out on both sides, is a long pool of deep water that has some fantastic inland snorkelling.

The easiest entry is from the east bank, via a path on the right-hand side of the bridge. Alternatively, if you’re feeling more adventurous you can head a little upstream and leap in from one of the small waterfalls that feed the pool.

The area around here mostly has depths greater than 3m, deep enough for a relatively high entry. However, I strongly advise entering the water by the bridge and swimming up to ensure your potential landing area is clear and deep enough.

I’ve snorkelled this site in summer, autumn and winter and, impressed by it, even donned scuba kit on one occasion. Snorkelling, as well as a perfectly legitimate form of diving in its own right, can often be a used to recce shallower dive sites before making the call as to the site’s suitability for a scuba dive – with all the extra time, equipment and hassle that comes with it.

The more rain, the faster and more powerful the flow. Although the excitement and fun of the river makes snorkelling in the rainier months tempting, I’ve found the visibility is much worse. I’ve also snorkelled it after heavy rains in winter and, again, I’d strongly advise against it. The current can make it hard to reach the bank, the visibility is zero and your ride through the 'snorkellable' section will be over in seconds.

In summer and later spring when there’s been less rain (usually – this is The Scottish Highlands after all) I find it at its best. I’ve had over five metres viz on both summer visits which, in a compact site like this, feels even better than similar conditions in the open sea. The water, stained by the peat and tannin, takes on a yellow-brown hue that intensifies to golden when sunlight is cast through the waters.

With a near imperceptible flow, a snorkeller can easily swim up down-stream and investigate the surreal rock sculptures, carved out by millennia of flowing water. As you float languidly beneath the old bridge, you get a view the many hillwalkers who pass by and wave will never get to see. I’ve even been able to lie on the river bed, metres below the surface, and look up at people on the bridge.

It’s a snorkel site I’d thoroughly recommend – especially if the surrounding hills have had a few dry days. I’ll be heading back there again at Easter and I’m taking a few friends on the way North to do some mountaineering. Neither are divers or snorkellers, so I’m hoping this site will bring them into the fold with a gentle but inspiring snorkel in Scotland’s liquid gold.