Could scuba diving be the key to longevity? 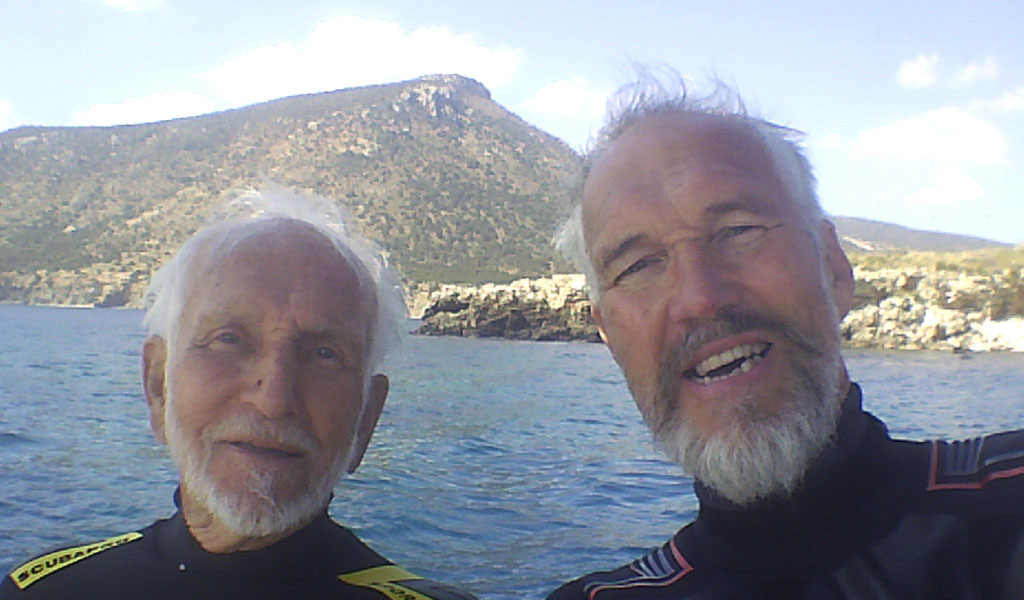 Son of the oldest scuba diver in the world asks...could scuba diving be the key to longevity? Along with pool training and in-water exercising where the body is effectively weightless, scuba diving is a good way of maintaining fitness.

Father and son Ray and Ken Woolley recently completed four dives together in Cyprus. The pair share 160 years in age between them and over 100 years diving history.

Now living in Cyprus, Ray typically completes about 50 dives a year down to water depths approaching 50m. He started diving with the Portland and Weymouth BSAC in 1960 and still carries all his diving equipment including the heavy compressed air cylinder unaided. The lifestyle in Cyprus suits him with its warm climate and clear seas.  He particularly enjoys diving on the wreck of the Zenobia, a 178m long roll-on, roll-off ferry that sunk on her maiden voyage in about 42m water depth in 1980 off Larnaca.  Also diving at the many sites offshore Latchi on the northwest coast of Cyprus.

His son Ken lives in Harleston Norfolk and is an active member of the BSAC Lowestoft branch. Initially learning to dive as a sport, he progressed on to becoming a commercial diver in 1980 with the advent of North Sea oil and gas production and the many rigs and pipelines off the east coast of England and Scotland.  Following a career in the diving industry, he has now taken up recreational diving again.

You don’t have be old to start scuba diving, the Lowestoft diving club takes trainees as young as 14. It is a good hobby to learn not only for UK diving but also for holidaying overseas as the BSAC qualifications are recognised internationally.

Perhaps scuba diving is the key to longevity? Along with pool training and in-water exercising where the body is effectively weightless, scuba diving is a good way of maintaining fitness. My father is in the water 2 or 3 times a day doing aqua-aerobic exercises and attributes his age to keeping active and alert.  Long may he continue.

Photo of Ray Woolley on left and Ken Woolley on right after completing the recent dives at Latchi, Cyprus