Scotland’s wildbottle sightings could be a thing of the past 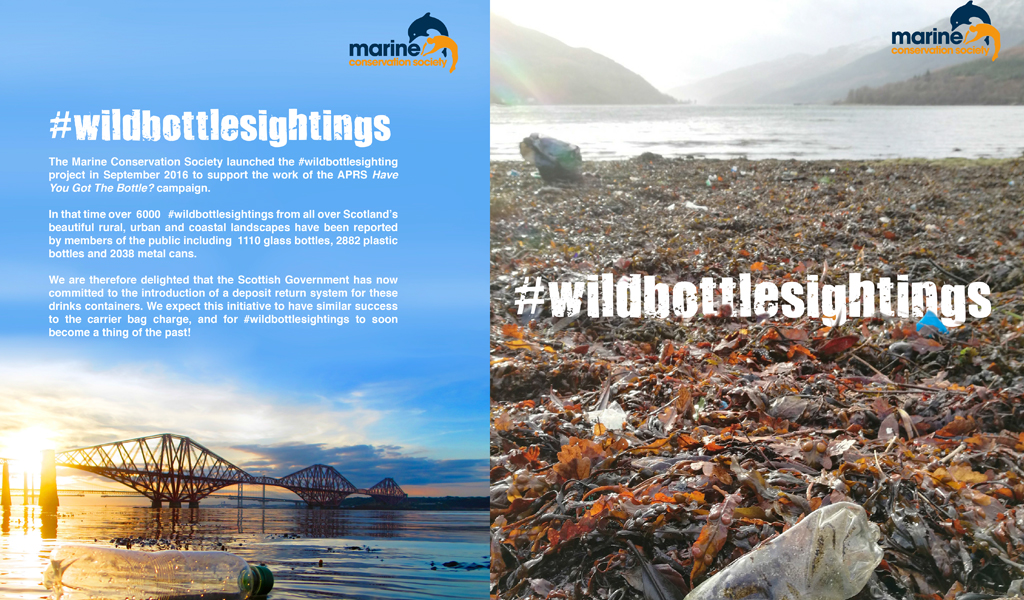 Report handed to Environment Cabinet Secretary shows the extent of the problem around the country.

The Marine Conservation Society (MCS) will hand over a report to Roseanna Cunningham MSP, Cabinet Secretary for Environment, Climate Change and Land Reform today, Wednesday 31 January 2018, highlighting the extent of the problem of drinks bottles and cans littering across Scotland.

MCS launched its #wildbottlesighting project in September 2016 to support the call for a Scottish deposit return scheme led by the Association for the Protection of Rural Scotland: MCS was a founding member of their ‘Have You Got The Bottle?’ campaign.

In that time over 6000 reports of drinks bottles and cans littered all over Scotland's rural, urban and coastal landscapes have been reported to MCS by members of the public, including almost 3,000 plastic bottles, over 2,000 metal cans and over 1,000 glass bottles.

MCS will hand the campaign report to Roseanna Cunningham at an event at Our Lady’s RC primary school in Perth. The report includes a map of where bottles have been spotted and a selection of tweets from wild bottle spotters including:

@SeeVSea Friday’s #wildbottlesightings in Gullane. I’m sure #depositreturn would help stop it being such a regular thing

First Minister, Nicola Sturgeon, announced last September that a deposit return scheme for drinks containers would be introduced in Scotland to tackle the rising tide of waste ending up in the countryside and seas. It’s expected to be launched in 2019.

Campaigns like this clearly show the need to take action on plastics and it’s fantastic to see Our Lady’s Primary School get behind such an initiative. I want to congratulate each and every one of the young people who have taken part and, of course, their parents and teachers too.

The Scottish Government has already confirmed it will take forward a deposit return scheme and intend to consult later this year, giving members of the public, businesses and others a chance to have their say on how it might work to help tackle our throwaway culture.

We will continue to call on the UK Government to follow our example and commit to a deposit return scheme so we can build on the success of plastic carrier bag charges and change people’s attitudes towards waste and littering.

We need to stop the tide of plastic entering our oceans. We’re delighted that the Scottish Government will be leading the way and introducing a deposit return system for drinks cans and bottles in Scotland.

The carrier bag charge proved that small financial incentives can make a big difference in behaviour, and we hope #wildbottlesightings will soon become a thing of the past! This report shows how serious a problem cans, glass, and plastic are for our marine environment and for our towns and countryside, and we hope that Westminster will shortly announce a deposit system for England, ideally one that works seamlessly with the Scottish system.

MCS and other organisations will now work together to plan the best system for the country.

Deposit Return Systems already operate successfully in other parts of Europe and some states in America, Australia and Provinces in Canada, with more than a quarter of a billion people living in places with deposit systems in place.

Check out 'stop the plastic tide' - MCS’s appeal to tackle the rising problem of plastic in our seas.