My story about surviving IPO 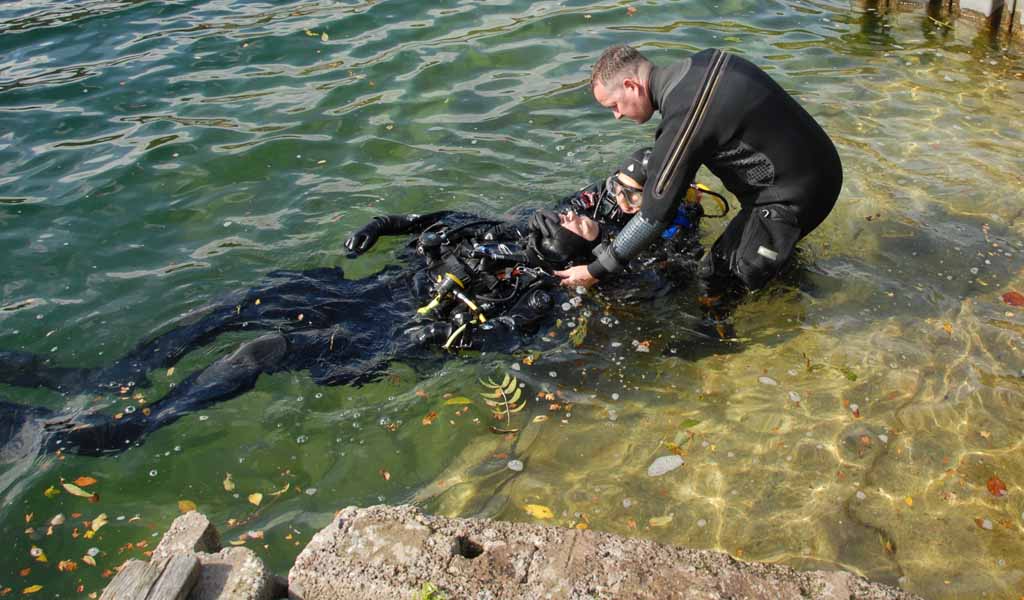 Underwater filmmaker John McIntyre has beaten the odds by surviving two near-fatal episodes of Immersion Pulmonary Oedema (IPO). Now he has a message he wants to share with the diving community.

The last thing I remember was handing my video camera rig to someone on the boat and joking about not putting it on eBay.

I then lost consciousness. According to the dive team, a pink frothy mixture was coming from my mouth. They used a knife to remove my weight harness and it took three people to heave me aboard the dive boat in Comino, Gozo.

They were desperately trying to bring me round, administering 100 per cent oxygen. I remember nothing but blackness about this moment, which could so easily have been my last.

Thankfully, the rescue efforts worked. As I began to stir back to life, I knew exactly what had happened. I’d suffered a pulmonary oedema – my lungs had filled with my own fluids, effectively drowning me. I also knew to sit up as this would help start the process of reversing the oedema.

As the skipper raced to shore, where an ambulance awaited to speed me to Gozo General Hospital with blue lights flashing, I was all too aware that this day marked the end of my dream job as a professional underwater cameraman.

As a measure of what I have lost, it’s worth knowing that I gave up a highly prestigious, well paid job as a BBC Correspondent, regularly appearing on the main news programmes, to become an underwater cameraman. Now I was the latest victim of a silent killer, one which probably claims more lives among scuba divers than we know.

That makes me a rare and lucky survivor, which is why I’ve decided to tell my story. Before recounting what happened in Gozo, there is an important historical detail. This wasn’t the first time I had suffered an IPO (Immersion Pulmonary Oedema).

On the deck of the Scylla

I’d been aware on a few dive trips, even snorkelling with whale sharks in Djibouti for the BBC Travel Show, that I’d had episodes of shortness of breath on a number of dive trips. I’d put these down to lack of dive fitness or my wetsuit being too tight.

But during a shoot for BBC Children’s favourite Blue Peter on HMS Scylla in 2009, filming the process of presenter Joel Defries learning to dive, my worst nightmare started to unfold.

My safety diver on that occasion was the all-action adventure man Andy Torbet. We’d positioned ourselves on the deck of the Scylla, waiting for Joel to join us. As with all television shoots, waiting around is an occupational hazard. We’d been in the water for around 25 minutes at a depth of around 20 metres, when I started to feel incredibly uncomfortable with my breathing. It was becoming harder and harder to satisfy the craving for oxygen.

I knew I had to abandon filming and get to the surface. My commercial diver training (HSE Media Scuba is required for anyone operating a camera underwater in the UK) taught me not to panic. I handed my camera to Andy and gestured I was going up. On this occasion, I even managed to carry out my obligatory safety stop, during which time breathing became increasingly difficult. With all the paraphernalia of UK diving, it was a relief that the dive boat had a lift system.

Back on the boat, my loud gurgling sounds and blue face were a clear warning that something was badly wrong. So, an ambulance was called to take me to Derriford Hospital in Plymouth, where the on-duty diving doctor diagnosed pulmonary oedema from my x-ray. I remember overhearing her say I’d never dive again, which was devastating news at the time.

For the next few months, I was at the mercy of the NHS in Bristol as various consultants worked relentlessly to determine the underlying cause of my IPO. It proved medical detective work at its best. A CT scan eventually showed that I had a very tightly narrowed artery leading to my left kidney (renal artery stenosis), which in turn was causing high blood pressure. The good news was this could be fixed. Within days of the diagnosis I had needles poked into my groin for a balloon angioplasty, which restored the artery and therefore the blood flow to my kidney. I doubt I could have received better treatment had I gone private.

Within a fortnight, I was back in the water, albeit gingerly diving to no more than 10 metres in a small Cornish harbour. My lungs felt as clean as a whistle.

But if I wanted to continue to work in the industry, I had to prove I was dive fit. I was prescribed amlodipine, a dive-friendly drug, to help keep my blood pressure at bay. I figured the best approach to taking my HSE dive medical was to be totally upfront about what had happened and provided all the medical reports.

With my HSE ticket in hand I was once again available for work and spent the next seven years travelling the world filming top locations for the BBC, ITV, NatGeo Wild, as well as a few corporate videos for good measure.

I have to admit to a degree of nerves filming with Miranda Krestovnikoff for BBC’s The One Show as we were returning to HMS Scylla, concerned the wreck might prove my Achilles heel. I’d been the first civilian diver on her after she sunk – making a report for the Six O’Clock News – so it was thought a good idea to reunite me with the wreck. Thankfully, all went well.

Of course, when you’ve suffered an IPO, it’s always at the back of your mind. What if it happened again, only somewhere remote where it’s commonplace to wait for a while on the surface to be picked up by RIB or skiff? When you suffer an IPO, the one thing you don’t have is time. Even after reaching the surface, the condition continues to worsen while you’re still in the water.

Fast forward to Gozo, April 2017. The job was to film military veterans for BSAC’s ‘Diving For All’ campaign to encourage people with disabilities of the virtues of scuba diving. These are guys who’ve been to hell and back and it was my job to create inspiring videos of each of them. We’d already carried out a couple of relatively shallow dives without incident. Then, on a bright, sunny Saturday morning we set out to dive the former minesweeper the P31 just a short distance from the port. Conditions were ideal, warmish blue water and no more than 20 metres in depth. The plan was to film in two waves; it was after about 25 minutes while waiting for the second wave that I got a terrible sense of déjà vu. I went from feeling comfortable to struggling to breathe within a matter of maybe 30 seconds. 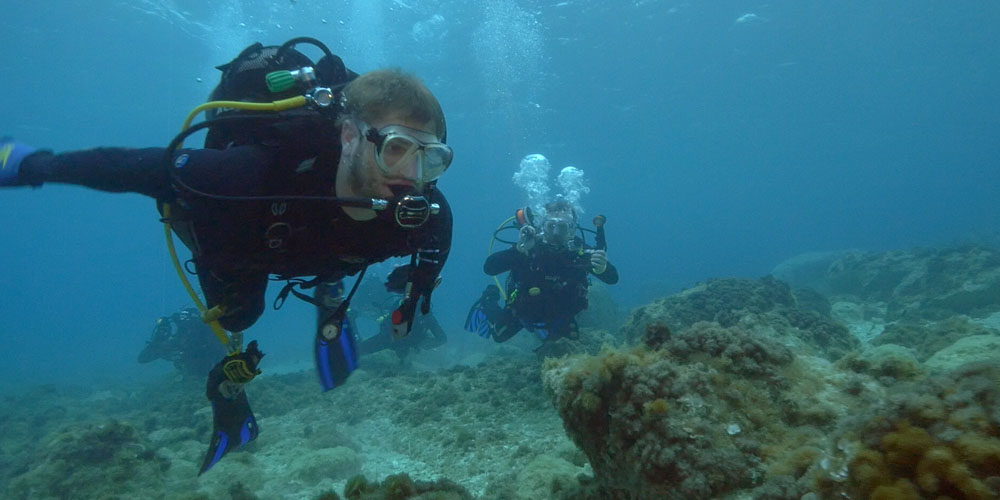 I knew exactly what was happening and had to make a split-second decision: risk the bends and bolt for the surface or try to get to a depth to carry out my safety stop as before. My body was screaming at me that I had to get to the surface or risk death. After all, the bends could be treated. I mustered all my strength to fin to the surface as fast as I could, realising only then that the boat was a good 20 metres or so away.

I shouted at the top of my voice for help! The driver of a small powerboat nearby threw me a lifebuoy which I clung to for dear life. Right then, one of the veterans I was filming, Rob Jackson, responded by swimming towards me like an Olympian. He dragged me back to the boat, where I blacked out.

When I regained consciousness, Jamie Hull, a former Special Services veteran who’d suffered terrible burns in a light aircraft fire, was cradling my head. I told him I needed to sit up, aware that this would help. It’s certainly my contention that working with highly-trained military veteran divers, my rescue was made all the more likely than with recreational divers. I am certain they saved my life.

By the time I reached hospital, my oxygen saturation levels were dangerously low at around 79 per cent. I was kept in intensive care for two days in Gozo, where I received excellent health care and a good understanding of the issues surrounding IPO. Doctors there told me I was lucky to be alive.

Subsequent medical tests showed I had a heart condition in the left chamber, causing hypertension. This almost certainly brought about my near-fatal experience. Over hydration may have also been a factor. But one thing’s for sure, there are likely to be many divers out there whose lack of medical fitness means they are a ticking time bomb. Often diving deaths, which may have been caused by an IPO, are put down to drowning because the victims had water in their lungs.

So, my message to the diving community is: Be aware of the risks and in the terrible event that someone recognises these symptoms during a dive, know that your main priority is to get out of the water, get on the O2 and sit upright. This may just save your life.

Join BSAC and you'll be helping us to develop and promote the best practice in diving safety. Plus, you can 'opt in' to get the latest safety updates straight to your inbox.

The latest guidance for divers, including snorkellers, on the condition Immersion Pulmonary Oedema (IPO) and how to avoid, recognise and provide first aid treatment.