It's a small, small world 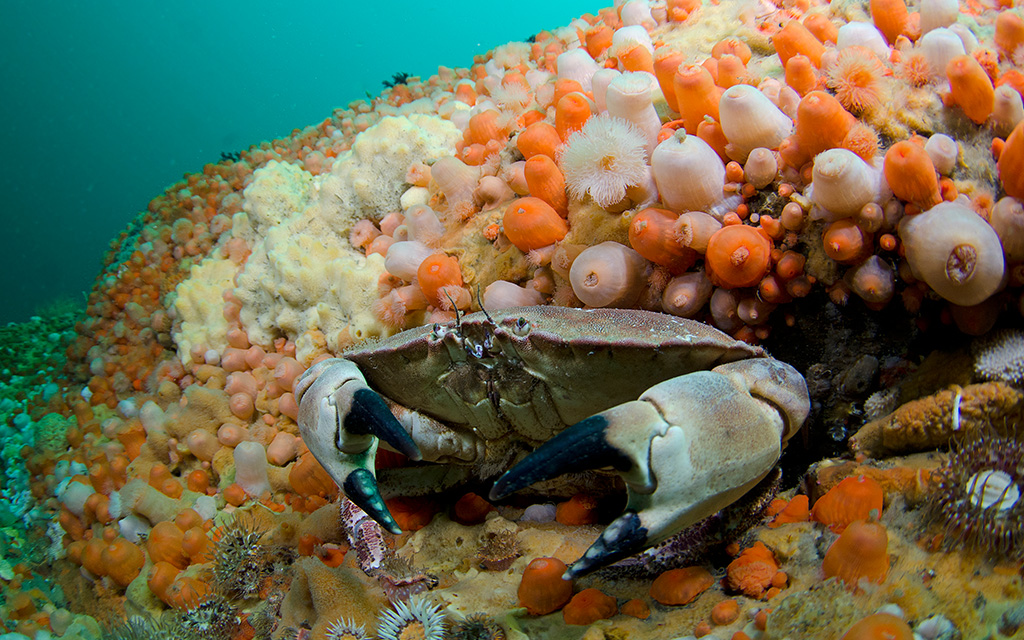 A few bad viz days have prompted Andy Torbet to change the emphasis of his snorkelling time, zooming in on the UK’s diminutive reef life.

As divers we have the vast coastal environment to explore – it’s a pretty big playground. With the seas and oceans filled with fantastical creatures, it is hard not to become obsessed with the big attention-grabbing ones. Even here in the UK, we have the largest grey seal colonies in Europe; the world’s second-largest fish (the basking shark); visits from the biggest turtle (the elusive leatherback, which visits in summer) and a variety of great cetaceans.

Our marine life is living large. But as snorkellers, we spend the majority of our time in the shallows which – with the exception of the seals – are not known for sightings of marine megafauna. So it’s only natural that, sometimes, there’s a lot to be said for studying the smaller animals of our shores while snorkelling.

This may come as a shock to some, but the diving conditions around the UK are not always ideal. Bad viz, however, poses little obstruction when investigating the smaller creatures around the seabed. If anything, it helps you concentrate and focus on the critter in question.

Although the large mammals, sharks and turtles take the lion’s share of the attention, they pale in comparison to the sheer number, variety, weirdness and colour of the species that inhabit the smaller sub-surface world. For example, the Marine Life Information Network, which details species found around the British coastline, has information on over 50 species of crab, including names I admit (with over 30 years underwater and a Zoology degree) to have never heard of like Bryers nut crab, and even 15 different species of barnacle.

The sheer biomass of smaller creatures outweighs the normal big hitters, so it’s much easier to find the multitude of wee critters than the usually uncooperative larger animals. But if it’s spectacle you want, then show me anything as kaleidoscopically coloured as the 100 plus species of nudibranchs here in the UK.

If you have a penchant for hard-shelled critters, how many of us have seen (or even knew we had) a European cowrie – as beautiful as its tropical cousin?

Perhaps your taste leans more to the macabre, and you appreciate the predatory prowess of our apex sharks or the orcas of Orkney and Shetland. In which case, who can fail to be impressed by the dog whelk, capable of drilling a hole into the shell of mussels and barnacles, then flooding the inside with chemicals that turn the animal into soup. It’s like an evil nutri-bullet.

We even have miniature versions of the main attractions. If you’re fascinated by the alien appearance and camouflage capabilities of the common cuttlefish, you should search the sand and gravel for a little cuttle, which is no more than 6cm fully grown.

We tend to disregard the most common species because of their greatest asset – they are so easy to find. But this availability should encourage us to take the time to get up close and spend some time really focusing and appreciating the creature.

You see, a lack of movement, rather than being boring, can be a real boon to the snorkeller. Have you ever really studied the texture, variation and magic of a group of plumose anemones, or gained a detailed awareness for the dragon-ridge appearance of a common starfish? Taking a torch, even on a day-snorkel, helps to bring the details of colour and texture to life.

As we search and study a tiny patch of the ocean we often find the rarer species overlooked by the standard cursory sweeping glance. So, as in life so in diving – appreciate the little things!

#Torbet On The Tube #Snorkelling