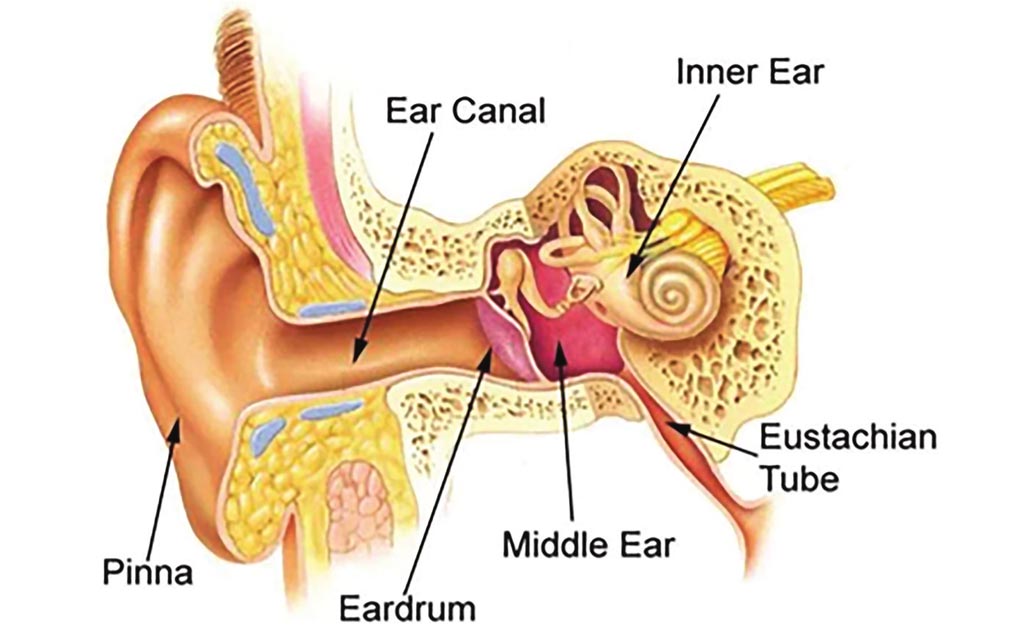 Dr Rosie Stokes sets out the workings of the inner ear, and two forms of damage that can occur to it through diving accidents...

The inner ear is a fluid filled compartment containing the cochlea and semi-circular canals. These organs are responsible for hearing and balance, and are not exposed to the ‘outside world’ as the compartment contains nerves which connect directly to the brain. Conversely, the middle ear, which it sits adjacent to, is connected to the ‘outside world’ via your throat (and thus nose and sinuses) via your eustachian tube. In divers, the inner ear can be damaged through two main mechanisms:

For dive doctors, it can sometimes be difficult to distinguish the mechanism of ear pathology, as the ear is a complicated structure and symptoms can be similar for both DCI and barotrauma. A lot can be gained from the history of the dive and the time of onset of symptoms. The average time of onset for an inner ear DCI is 40 minutes from surfacing, whereas barotrauma can be evident either during the dive or immediately after.

If the diver had ear pain during the dive or had a rapid ascent, then it is likely to be a barotrauma. It is important to recognise this, as putting a diver with a barotrauma into a hyperbaric chamber may make the damage worse! Barotrauma usually occurs when the diver has a cold or has taken decongestants that have worn off whilst underwater. Alternatively, the diver may not have equalised their ears sufficiently during the dive. Pressure changes in the middle ear cause damage to the surrounding structure and can be seen as redness or swelling on the eardrum.

Such divers should refrain from diving until this has completely settled, and should seek advice from a dive doctor. If a leak of the fluid from the inner ear has occurred, then the diver is likely to have longer-term problems with their ears and may not be able to dive again.

Also called an audiovestibular bend; risk factors include deep or repetitive dives and underlying medical conditions such as a PFO (hole in the heart). Inner ear DCI has also been associated with mixed gas diving, such as use of trimix. While this is a known risk factor, most cases that we see at DDRC are divers on air or nitrox.

The inner ear becomes injured due to the expansion of nitrogen bubbles in the tissues causing damage to the structures and nerves that control your hearing and balance. The diver may experience symptoms such as changes in hearing, ringing in the ears, nausea/vomiting, and difficulty with balance. Often, the diver will lie down and hold their head still to try to minimise this. As stated previously, these symptoms may not be evident immediately and will generally appear, on average, 40 minutes after surfacing. If you recognise these symptoms in yourself or another diver, it is important to start oxygen straight away and to call for medical assistance. Seek advice from a dive doctor as soon as possible.

The patient’s neurological system including their eye movements, balance, coordination, and hearing will be examined.

Treatment: If an inner ear DCI is diagnosed then the diver will be treated in a hyperbaric chamber to reduce the size of the nitrogen bubbles. Subsequent hyperbaric oxygen treatments allow any damaged tissue to repair and will be continued daily until the symptoms improve or stabilise.

Following treatment, the diver must refrain from diving for three months and will need to be reviewed by a dive doctor for a fitness to dive assessment prior to returning to the water. It is likely that they will be offered a referral for a PFO (hole in the heart) check to screen for this underlying risk factor (especially if the incident occurred with a relatively conservative dive profile, or if there is a history of migraines with aura).

Both an inner ear barotrauma and inner ear DCI can leave the diver with permanent symptoms, which could affect their career or stop them from diving again. They may need to be seen by an ear, nose, and throat (ENT) specialist for further input. Keeping your dives conservative and controlled will reduce the risk of a dive injury and will protect your ears. It is much easier to prevent damage than to treat it!

This Anatomy of a diver column was originally published in SCUBA magazine, Issue 120, November 2021. For more membership benefits, visit bsac.com/benefits.