A volunteer dive team has been granted permission to extensively survey the wrecksite and wargrave of HMS Royal Oak in Scapa Flow, Orkney.

Exciting new 3D photogrammetry techniques means they can produce 3D models of the wreck, which non-divers will be able to explore. Extensive stills photography and videography will document the artefacts, but further aims to capture and share the spirit of this unique place.

About the HMS Royal Oak

In the early hours of 14th October 1939 U47’s commander Günther Prien guided her silently into Scapa Flow through one of the narrow entrances to the east of the Orkney. The anchorage, which was the base of the Royal Navy’s Home Fleet at beginning of World War Two, appeared almost empty. 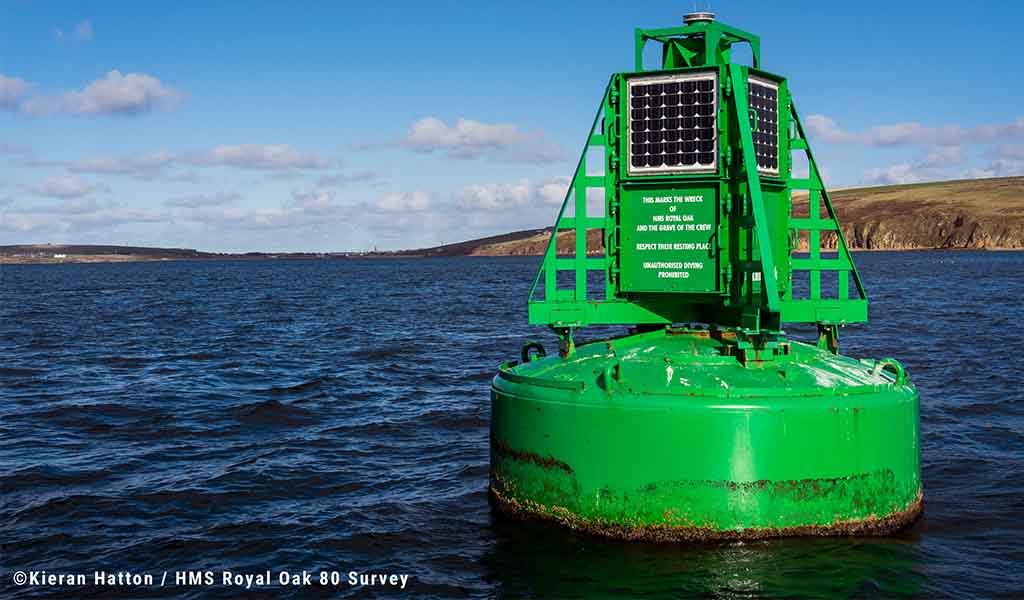 To the north ships were spotted lying in Scapa Bay. One of these was the Revenge class battleship HMS ROYAL OAK.

How the HMS Royal Oak sank

Seven torpedoes were fired. Of the first salvo only one hit, striking the bow at 01:04am. Muffled explosions woke the sailors on-board but there was confusion as to the cause. Not for an instant did they believe they were under attack in the safety of the home anchorage. Mindful of the explosion that had destroyed HMS VANGUARD in 1917 a check was made of the magazine temperatures. However, many sailors returned to their hammocks, unaware U-47 was repositioning for her next strike.

Whilst repositioning, Prien attempted a shot via the stern tube which missed. After re-loading his bow tubes the U-47 once again turned towards HMS ROYAL OAK and fired a further salvo of three torpedoes. All three found their target.

Explosions blew three additional large holes in the starboard side of the ship. The aft two opening up fuel bunkers and spilling oil into the sea. Taking on water, the ship listed to starboard. Some crew who had made it on deck escaped into the water, others climbed over the port side to a waiting drifter, Daisy II. Some made it aboard one of the two steam pinnaces and both boats escaped the sinking ship.
The bravery of the crew of the Daisy II saved hundreds of lives. Those aboard the pinnace were not so fortunate. Survivors report over 100 men aboard the ship’s boat as she made her way west. Overloaded by at least 50% she capsized and sank – most men died. In just a few minutes Royal Oak was gone. 834 perished with the ship, including over 134 Boy Seaman not yet 18 years old.
U-47 successfully escaped Scapa Flow and Günther Prien returned to Germany a hero. The loss of HMS ROYAL OAK was a significant propaganda coup for Germany and the attack sent shockwaves throughout the Admiralty. As a direct result the Churchill Barriers were built to block the Eastern Approaches to Scapa Flow. Subsequently, the landscape, seascape and marine environment of Scapa Flow were changed forever.
Royal Navy divers lift the 79th Anniversary Ensign to the surface. 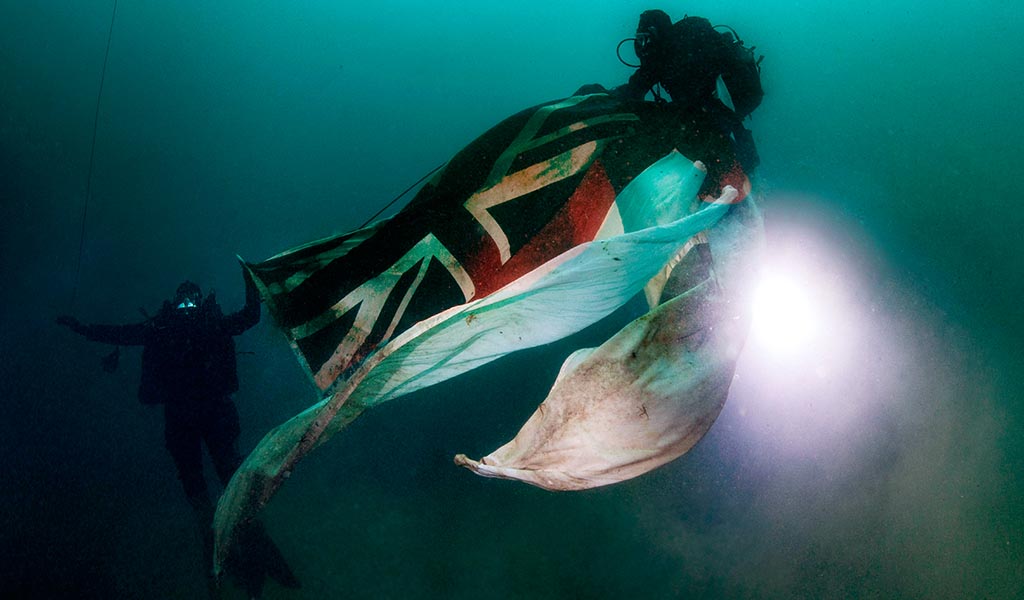 Designated an official war grave, Royal Navy Divers visit the wreck annually to pay respects to the lost sailors and fly a White Ensign in remembrance. Sadly the last survivor of the tragedy, Seaman Arthur Smith, passed away in December 2016. However, the people of Orkney continue to maintain close links with the relatives of those lost through the HMS ROYAL OAK Association.
Divers illuminate a six inch casemate gun o HMS Royal Oak 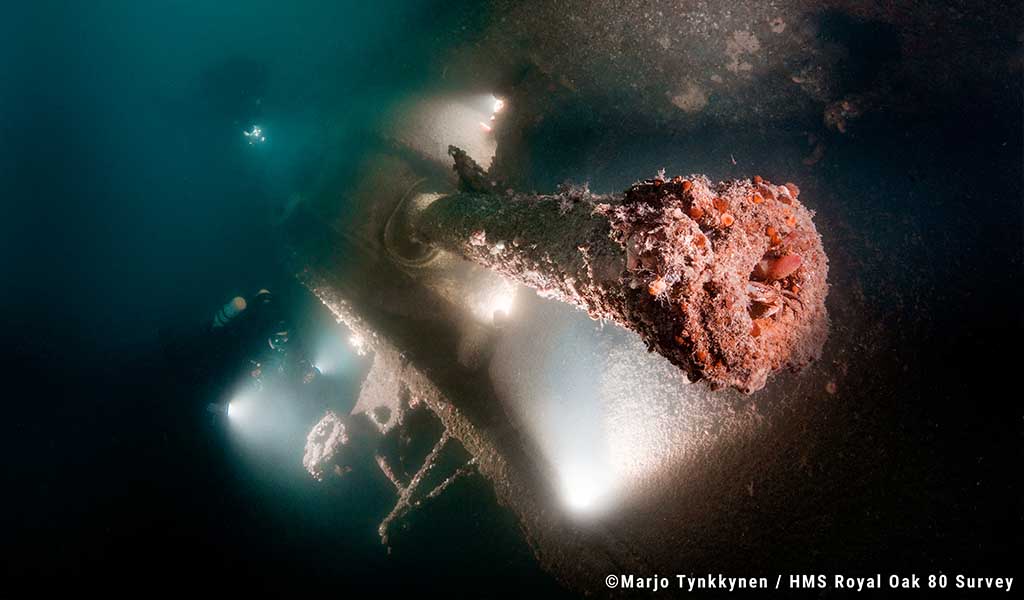 Ahead of the 80th anniversary of her loss later this year, a team of volunteer civilian divers has been granted permission to dive the wreck by the Secretary of State for Defence.
This is part of a collaboration with the Royal Oak Association and the Royal Navy to document the last resting place of the men who lost their lives on that fateful day, so their passing can be remembered and preserved for future generations.
The project aims to ensure that HMS ROYAL OAK is not forgotten, by sharing imagery with relatives of those lost, as well as the wider public. 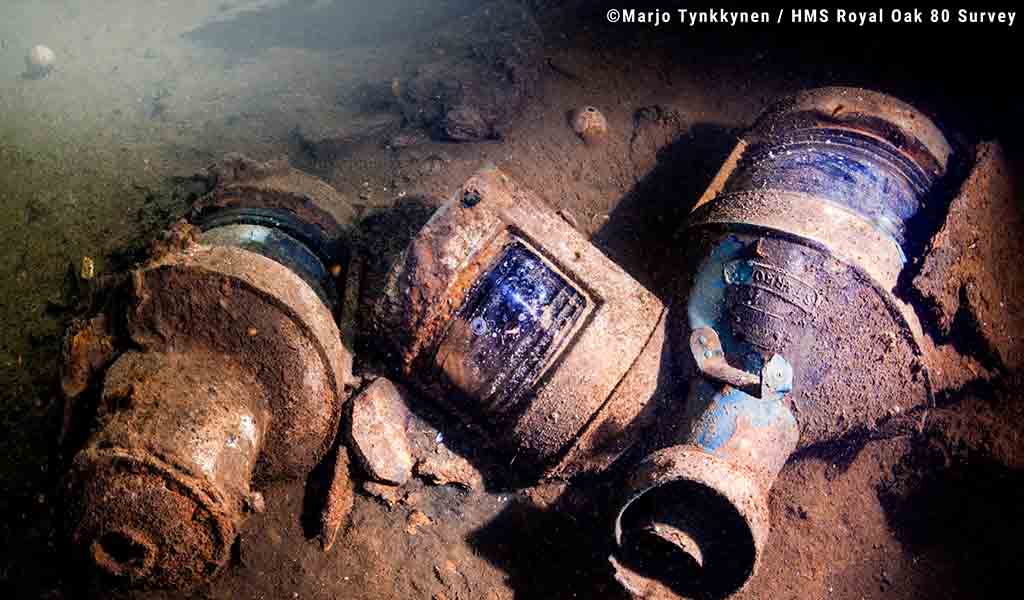 Ship's lamps sit on the seabed underneath the ship.
Unlike the battlefields of war, such as the D-Day landing beaches of Normandy, naval war graves are not accessible for the vast majority of people and are easily forgotten. Lying beneath the waves, it is difficult for current generations to imagine the significance of these sites and the scale of such a loss.

The survey team is using state-of-the-art underwater imagery techniques, in order to produce high-quality photography and video. In addition, 3D Photogrammetry is taking place so that digital 3D models of the wreck can be produced. By using these techniques, in essence the team are able to digitally bring HMS ROYAL OAK to the surface.

The wreck of HMS ROYAL OAK is the final resting place of 834 men and boys. As the most intact underwater dreadnought-era battleship, she has an architectural grandeur befitting of any national memorial. However, at the smaller end of the scale, artefacts pertaining to everyday life onboard are scattered around the site, bringing home the human story of those lost. The site is peaceful, yet vibrant and supports a thriving marine eco-system. It is both an honour and a privilege to get to know the site. 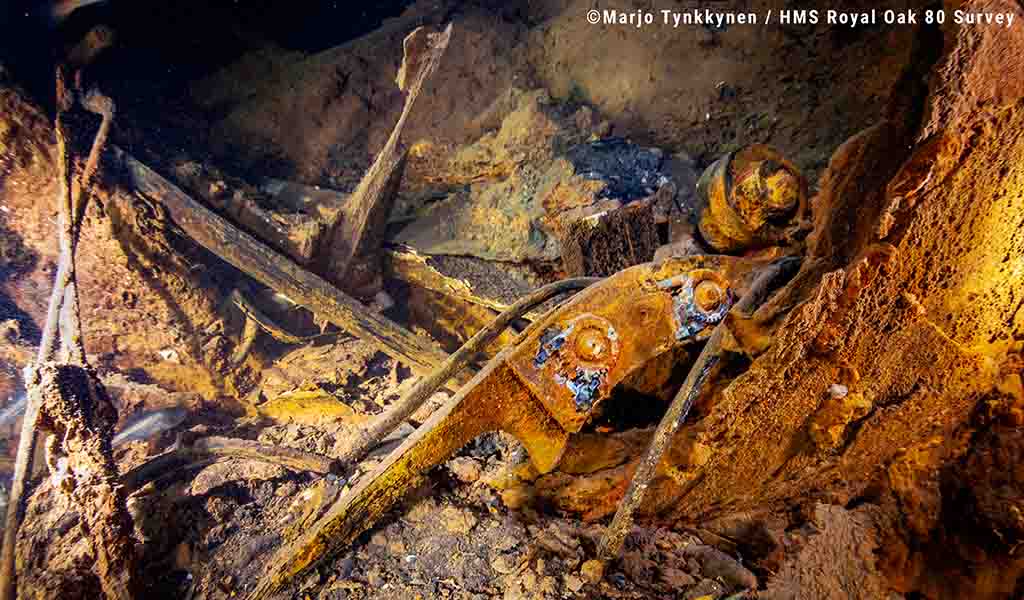 The head of double base survives in the centre of this image and to the left is the bow.

The survey will have great historical value

In full support of the project Gareth Derbyshire, Chair of the Royal Oak Association said:

The HMS Royal Oak Association feels the survey to be of great historical value. Whilst the ship was lost almost 80 years ago and the last of the survivors passed away in December 2016, the Association comprises of many children of the men who were lost not to mention an increasing number of grandchildren, such as myself, and relatives of survivors.

There are few details of the ship in the public domain, despite the huge loss of life. We believe that the survey will not only be of significant interest to those with a direct connection to the ship but also act as an important means of ensuring that the history of the ship and the circumstances of its loss are available to future generations.

The timing of the survey and the presentation of the images to coincide with the 80th anniversary of the loss has particular resonance and is aligned to other activities that are being undertaken by and on behalf of the Association to raise the profile of the ship.

The Association recognises that the wreck of HMS Royal Oak is a war grave and acknowledges the respect that is shown by the people of Orkney not only to the site but also to the memory of the ship and her crew. We would, therefore, be reluctant to support any intervention in this hugely important location unless we had complete confidence in the benefits to be derived. In this case, given the experience of Ms Turton and her team and their collaboration with Royal Navy Northern Diving Group, we are pleased to support the survey and look forward hugely to the results.

The diving work nearly complete, the project will now move into the second phase which is to process all of the data collected. This will ultimately be distributed to the public by a comprehensive survey report, as well as presentations later in the year by team members.