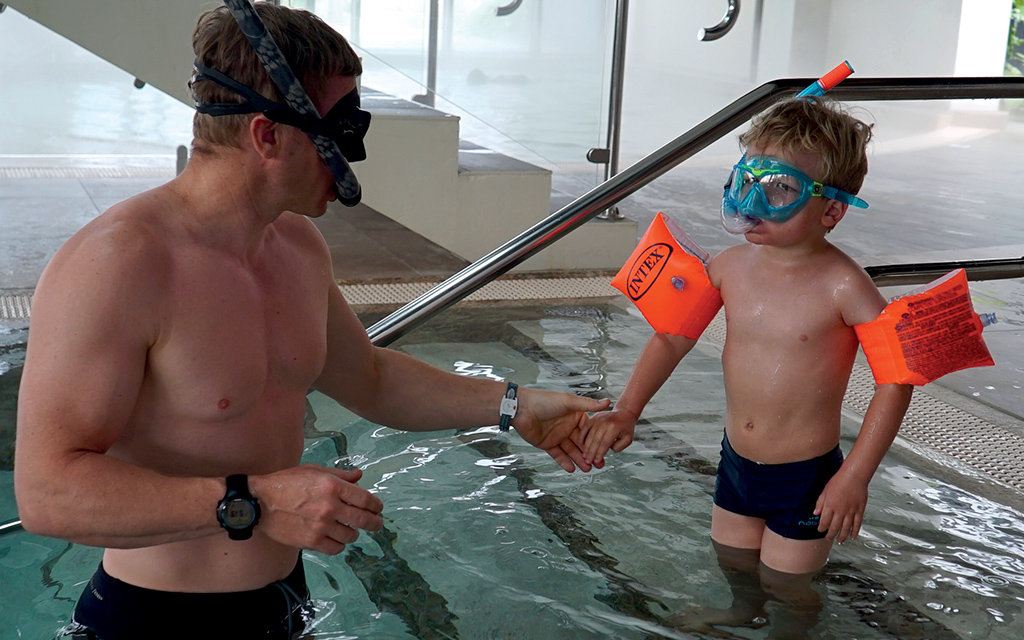 Keen to share the simple delight of looking at things underwater, Andy Torbet takes his son Archer for his first snorkelling experience.

I've snorkelled with sharks and seals and cetaceans, through shipwrecks and sea caves, in tropical oceans and glacial lakes. And I admit to sometimes becoming complacent about what we get to experience when diving. But a reminder not to take the sub-aquatic kingdom for granted came in the form of my four-year-old son when I finally took him on his first snorkel.

I decided that rather than go straight into the frigid waters of North Scotland as I had done, I was endeavouring to make it a more positive experience. I wanted to make sure he understood how to use his mask and snorkel and that he could actually see what was going on. So during a recent family trip to France, we had the chance to use the heated indoor/outdoor pools at our campsite. We donned our trunks, mask, snorkels and, in his case, water-wings (I’d forgotten to bring my old Fenzy life jacket that was part of the obligatory kit for a BSAC Snorkeller back in 1988).

To build his confidence in the kit we started on solid ground. The idea that you could breathe underwater via a giant straw was still a little abstract and the best way to explain is often to demonstrate. So, lying on the pool edge, he happily plunged his face in the water breathing through his snorkel and, for the first time, seeing underwater.

We forget, with many of us having years of diving experience under our (weight) belts, how incredible it is to actually see underwater. Very few people had really been able to clearly observe the underwater world until just over a century ago. Think about that. The views we take for granted, even the worse dives on the worst day, would have blown the minds of all but a fraction of humans who have ever lived. 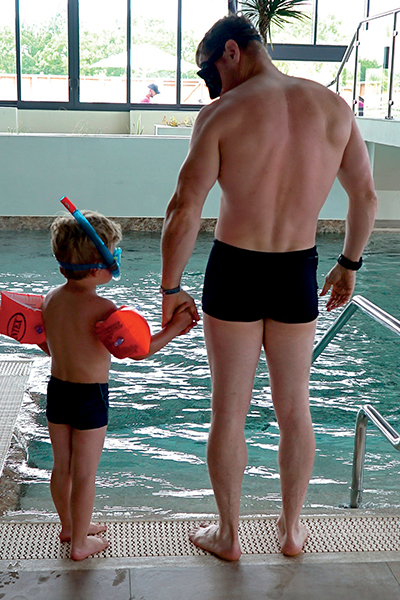 The underwater world is a completely alien planet. Forget the top of Everest or the South Pole, sub-surface is the most hostile environment on Earth for humans to survive. In fact, it’s not really Earth at all. For the vast majority of human history, the world as we knew it ended at the water-line.

Yes, we were aware it carried on to somewhere, that there were things living in there, but it represented such a mystery we could only make up myths and legends in an attempt to understand it. So perhaps it was understandable, if not forgivable, how easy it was for people decades ago to dump chemical, biological and nuclear waste into the deep sea and assume it was gone forever.

Becoming a snorkeller is not simply a matter of fortune. We are able to snorkel because we got off our backsides and put in the time and effort to gain the necessary skills. But we are fortunate that we were born in an era where the portal was open to us.

So my son’s first experience may well have only been in a swimming pool. But his absolute joy of just being able to open his eyes underwater; to see his own hands underwater; to look me in the eye underwater; to watch his mum swim by underwater… it was incredible. The experience blew his mind and opened up another universe, like stepping through the looking glass and entering a world like the one you know so well… and yet so very different.

On my part, I was incredibly proud (and, if I’m honest, relieved) by his enthusiastic reaction to his first snorkel although if this carries on, my future bills in regs, drysuit and rebreathers fill me with dread. I’ll leave you with a quote from a four-year-old who reminded me about something important in diving. Something to consider even when the visibility isn’t up to scratch; when you don’t see quite as many sharks as you’d like; when the wreck isn’t in the best condition and the dive doesn’t work out as perfectly as you’d hoped –

Being underwater is amazing. This is so cool.

This course is aimed at younger children and is a great way to get them started in snorkelling.  Find out more about Dolphin Snorkeller.