What to do in a lightning storm at sea 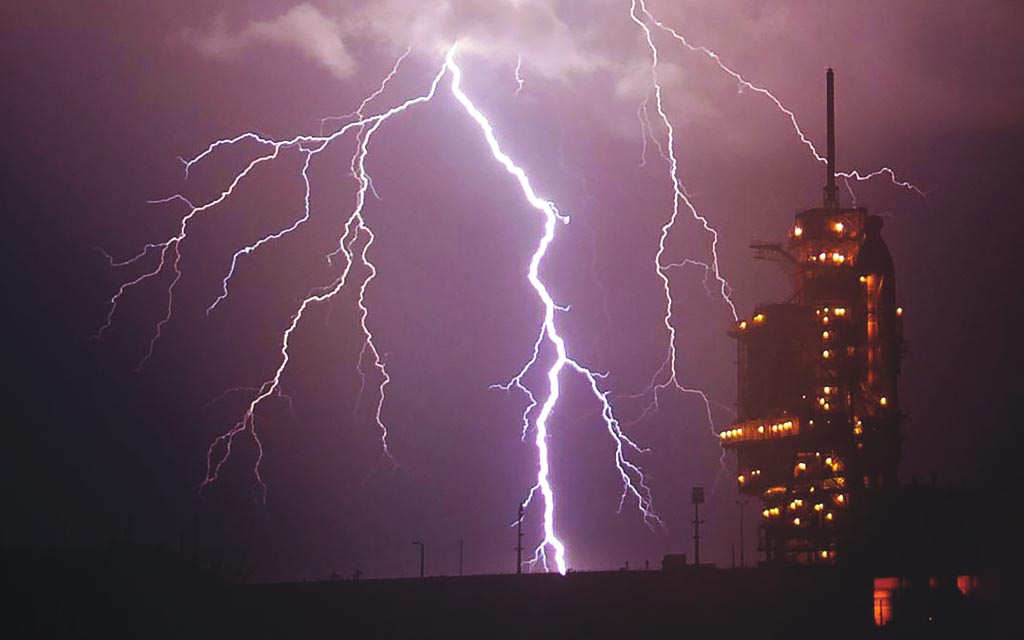 Lightning is far more likely to hit the land than the sea. Although the sea makes up 70% of the Earth’s surface, NASA has estimated that only 2% of lightning strikes occur over the water. It is rare for lightning strikes to occur in deep water areas, but near the coast, strikes can be more common. Summer weather conditions with heat and updrafts tend to create more storms with lightning and, of course, that’s the time we are most likely to be out on a boat or in the water. So, how scared should we be?

Being in the water in a storm

A typical lightning strike can be around 300 million volts and 30,000 Amps. That’s easily enough to kill a human. When lightning strikes the sea, most of the electrical discharge radiates across the surface and this is the area where the greatest risk occurs. It’s been estimated that the very high-risk radius is around six metres from the strike, but the radius can extend up to 100 metres.

The electric current has to pass through your body to do you any harm, but the conductive sea water will carry much of the current around you. You are at greater risk if you are above the water in a boat, or on a paddleboard or windsurfer. Being immersed in the water actually lowers your risk, and the deeper you are the more your exposure to the current is reduced.

We also need to consider the sound wave that a lightning strike generates. A strike at the surface creates a sound that is around 260 decibels, which is twice as loud as a gunshot. And we all know that sound travels well through water. There is some research that suggest cod lose their hearing from noises above 180dB (decibels), and for other species this may be around 220dB.

There has been some research to suggest that fish take refuge in deeper water when storms whip up sea conditions, so it’s likely that they are further away from the point of the strike. Even being within 100 metres of the strike could still expose them to that dangerous sonic level.

Divers at the surface are at risk of their cylinder being struck by lightning. In 2007 in Florida, a diver died when the lightning struck him as he surfaced. Obviously, the highest point of the diver is at risk, and for many of us hanging vertically in the water that’s either our head or cylinder. And given that scuba divers have a finite supply of breathing gas, attempting to stay underwater and wait out the storm isn’t practical. Being covered in non-conducting neoprene can help protect the diver to some extent, but it’s still not an experience that any of us would seek out.

Being on a boat in a storm

But what about being on a boat in a storm? Different boats are at different levels of risk from lightning strikes, with trawlers at the highest risk. But in open sea, a boat presents the highest conductive point and may become the target for the lightning discharge. For many dive boats, the VHF antenna is usually the point of contact.

Some boats have lightning conductors installed to move the current away from risk areas such as passenger cabins. The lightning will take the path that allows it to travel through the boat and find its way to the water. Often the exit path is through the prop or rudder, so aside from some damage to the paint, the running gear isn’t compromised. Spilt fuel in the bilges can, however, present a risk for causing an explosion. Boats made of steel have an automatic ground in their hull, but wooden or fibreglass vessels are more at risk.

The exiting lightning can even punch holes through the hull. Electrical devices on boats can be affected if the lightning discharge is close. Lightning generates a powerful electromagnetic field and can induce currents in cabling. A boat doesn’t even have to suffer a direct hit to experience electrical faults. The random nature of electrical faults caused by lightning strikes is sometimes the first clue for boat owners to indicate their unattended vessel has been struck.

We all know the advice for keeping safe in a storm on land. Don’t shelter under trees or tall objects, avoid being near lightning rods, metal fencing etc. On a boat, you’re best to get to port and get off. But if the shore is out of reach, drop anchor, remove any jewellery, put on life jackets and get low in the centre of the boat. If the boat has a cabin, stay inside.