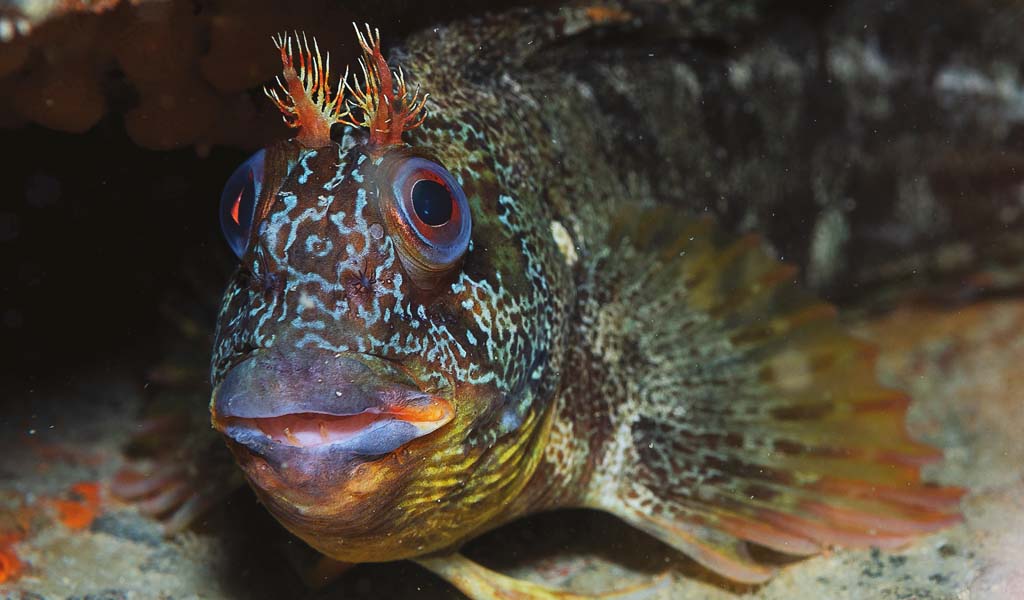 In the lovely, late summer months of 2018, I was offered the opportunity to join a club trip to the Channel Islands. Unusually my dive club, Clifton Sub-Aqua Club in Bristol, was planning two separate week-long expeditions to different destinations at the same time so I had to choose my poison; a nice problem to have. Of the two, the Channel Islands would be a new destination for me and I readily opted for the excitement of the unknown. There was also the lure of the diving platform: MV Salutay’s reputation preceded her as a first-class diving platform with a top-notch skipper, fabulous food and excellent hospitality to boot. I hadn’t been on a trip with Al and Freda Wright before now, and I didn’t want to miss out this time, so I signed up straight away.

The currents around the Channel Islands are fairly fearsome and we had booked a week on spring tides with slacks at inconvenient times of the day, so it would be invaluable to have such an experienced crew and be organised well. In an interesting spin on UK wreck diving, some of the wrecks we dived were sunk by the Royal Air Force during the German occupation of the islands. This situation is more familiar to me when diving in Normandy or Norway. There are of course plenty of other rusty casualties around the islands from other conflicts or just navigational hiccups. There is plenty to explore and we only really skimmed the surface in our week.

This wreck sits upright on the seabed at a depth of around 30 metres, standing proud by about 5m. The name of the wreck is a clue both to her Dutch origins and the fact that she sank carrying cement. Her story is that she was captured by the Germans during the Second World War and then bombed by the RAF on 23 May 1943, while en route from St Malo, Brittany, to St Peter Port, Guernsey.

The shingle seabed on which she lies ensures good ambient light on the wreck but there was a fair bit of sediment in the water, which affected the visibility. This proved to be a common theme during our trip, due to the winds that had blown the week before. There was, however, much life to admire, so both wreckies and nature-lovers were happy: my buddy found the engine room and a toilet, and I saw a big old crusty lobster, some pink sea fans and the potato crisp bryozoan. There were also shoals of bib and pouting roaming around and lots of conger eels and tompot blennies, so, all in all, I was very pleased with this first look at Channel Islands underwater life.

This was a fairly steep wall down to 30m, and it revealed more of the local wildlife including plenty of jewel anemones and sponges, a dozen or so happy crawfish (also known as the European spiny lobster, Palinurus elephas). The Channel Island of Sark became the first place in the UK to protect the crawfish in 2018. I also saw a couple of big cuttlefish roaming around at 30m.

Photo by Kirsty Andrews - The reef wall at Vingt Clos, with jewel anemones and spider crab 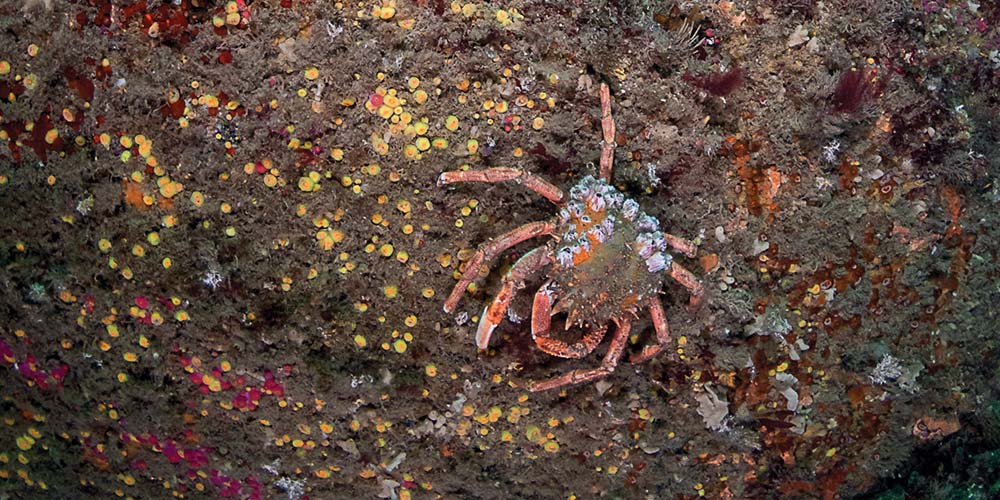 Our next wreck target was another Dutch coastal cargo vessel, but this time it wasn’t a wartime casualty. MV Heron sank on 16 September 1961, running aground north of Jersey. Depending on the tide, the wreck lies between 22m and 32m. We found an intact rudder and propeller and the bow, with more broken up areas in between. The cargo of tomatoes, not surprisingly, is no longer to be seen. 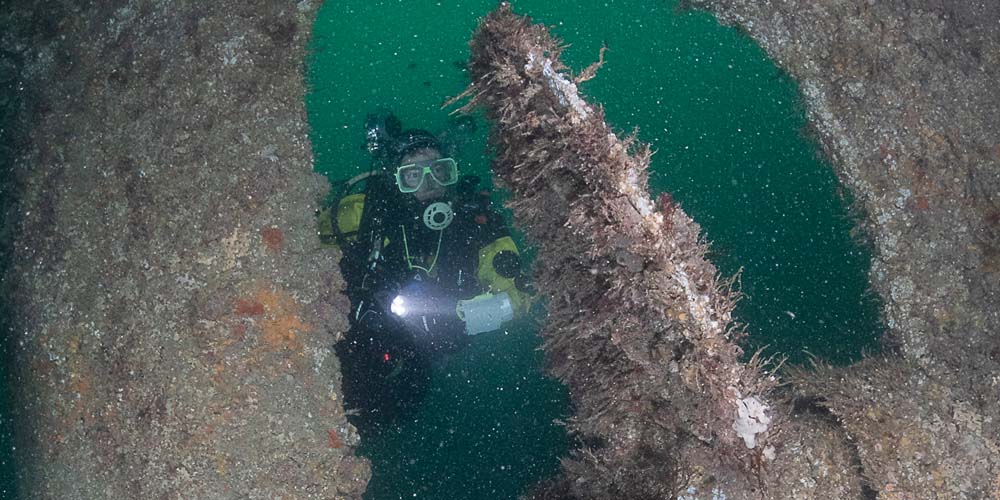 The wreck of the Schokland represents the greatest single loss of life in the Channel Islands during the Second World War, but it is not classified as a war grave as it is understood that no bodies remain on the wreck. Some 370 troops were on board this commandeered merchant steamer when it crashed into a reef on 4 January 1943, and only 40 were rescued. Local reports suggest that the skipper on this day was a last-minute replacement with no knowledge of local waters, and this, combined with night manoeuvring and orders to maintain a near blackout, led to the collision with the reef at Grande Grune rocks, off Noirmont, and a very swift sinking.

We had our best viz on this dive, at around 8m, and it was a crowd-pleaser. The wreck is upright and mostly intact, with a nice prop and rudder and at the other end, the bow stands proud. In between, there are two big boilers, a donkey boiler and the triple expansion engine, guarded by patrolling shoals of bib and pollock. There are holds to explore and even the captain’s bath on the starboard side, a tempting place for budding comics to pose. We managed to fully circle the nearly 70m-long wreck before the current picked up and we were forced to ascend.

Photo by Kirsty Andrews - The imposing bow of the Schokland wreck 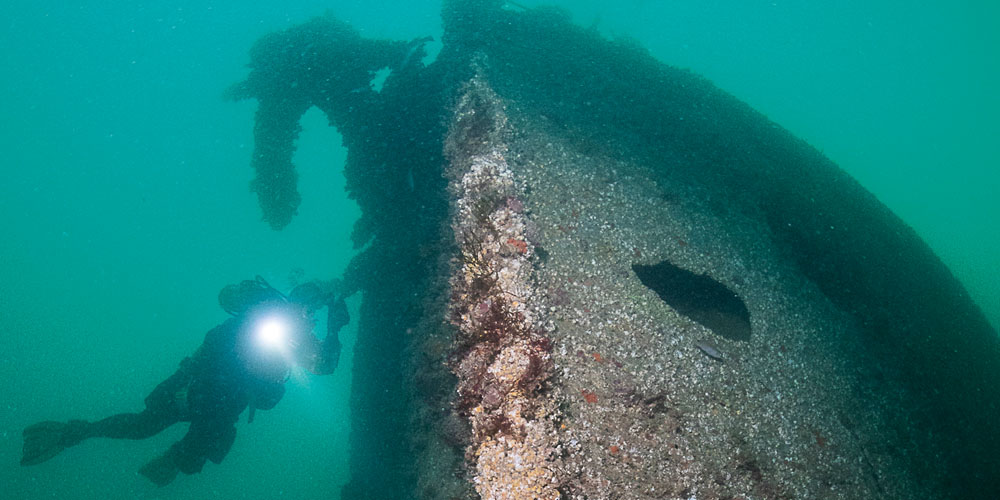 This was another wreck where we were blessed with improved viz, accentuated by a shingle seabed at 37m. The Second World War wreck is in several separate sections, each offering points of interest such as the bow, still pointy if half-embedded in the sand and featuring an anchor in an intact hawse pipe. Past the boilers, the stern section was flatter but featured a machine gun mount and large winch.

Around the nearby seabed, two edible crabs had a fight next to a massive torpedo (presumably not the cause of their argument), and another crawfish watched placidly. We were briefly graced with Freda’s presence on this dive, scooting past efficiently before returning to prepare another spectacular culinary offering. She was pretty excited on the surface as she’d spotted a seahorse drifting by on some weed on her safety stop. We were a little dubious of this, but it turned out not to be the only unusual marine sighting of the trip.

Photo by Kirsty Andrews - A hefty anchor on the minesweeper wreck 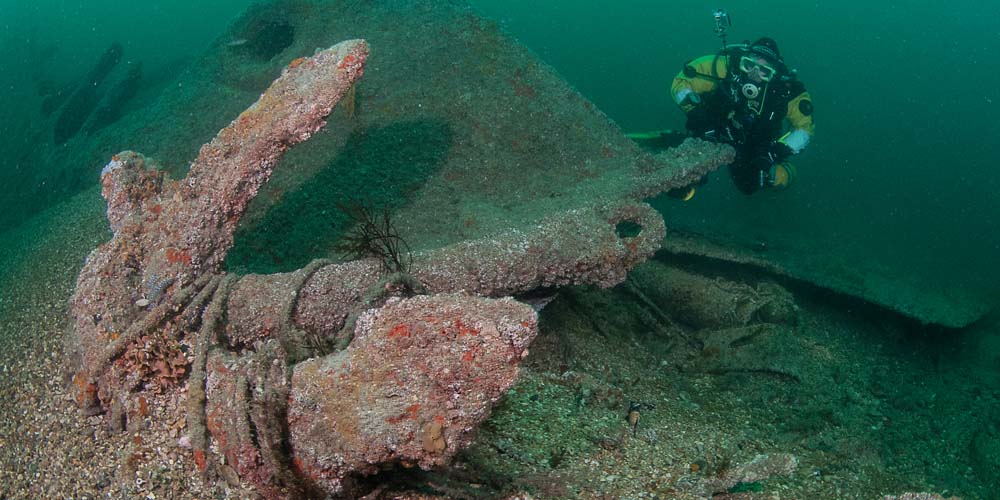 A former Rhine barge, Kromwijk was converted into an armed coaster by the Germans. In December 1942 she was bombed by the RAF and sunk by a direct hit. This is a fairly flat wreck, with two boilers standing proud and various other points of interest for those rootling around on the seabed, including engine pistons in the upside-down midships section, and some remnants of rudder and propellers at the stern. I chose a macro lens for this dive so I was fairly focused on tiny creatures. I was happy with my choice, spotting several nudibranchs including some on a handful of pink sea fans.

One strange sight was a berried spider crab with a parasitic anemone (Calliactis parasitica) living happily on her leg and hundreds of spider crab eggs being sheltered on her undercarriage. I pointed this out excitedly to my buddy but she was less impressed than I hoped. It turned out on surfacing that, while I had had my head down looking for sea slugs, she had seen what she thought might have been a porbeagle swimming by at speed. I’ve never yet seen these UK great white shark lookalikes and will admit that this definitely trumped my spider crab.

Another diver reported seeing a tuna speeding by. Whether these sightings are to be relied on one hundred per cent I can’t say. I suspect it was one creature, whether tuna or shark, but it appears that very exotic species can be found in the vicinity of the Kromwijk, alongside the spider crabs. 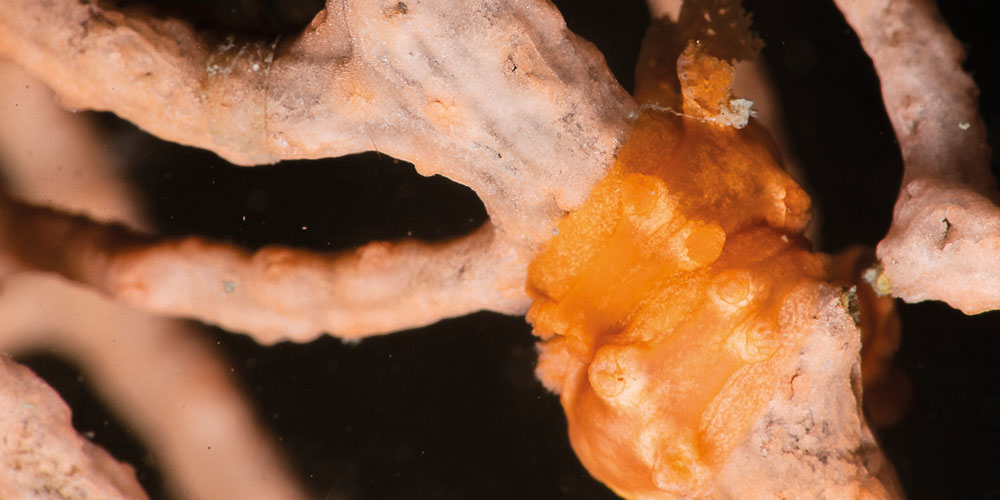 The weather had held for most of the trip but it started to close in for our last day or so, so in part by popular request and due to the inopportune weather limiting our options somewhat, we repeated the Cement Wreck. I took the opportunity to go macro again for a million and one tompot blenny portraits. This dive was followed by another pinnacle at Boue de Kaine, which was very pretty, covered in jewel anemones. We found both a big patch of relatively uncommon yellow cluster anemones and a free-swimming baby conger, whose brilliant blue we followed for a minute or so.

We had joined the Salutay in Weymouth and crossed to the Channel Islands from there. On our return journey, we had the opportunity to dive a more familiar, local Weymouth wreck, the SS Binnendijk. This is another Dutch cargo ship and Second World War victim, this time on the Allied side. She hit mines placed by German U-boat U26. There were many congers around and other points of interest amid the wreckage but, perhaps due to the steadily building winds or the location, the viz was worse here than on our Channel Island dives.

All in all, on our week-long trip we got an excellent taster of what the Channel Islands has to offer. My buddy Vicky and I dived with nitrox in our twinsets and carried stages of 80 per cent nitrox for accelerated decompression. As usual on our club trips, we were a relatively mixed crowd with some single-cylinder divers, some rebreathers and most kit combinations in between. In general, we dived at Sports Diver depths. In the Channel Islands, there are plenty of interesting tales for maritime or wartime history buffs and there is plenty of wildlife to keep squidge-lovers happy. I can’t help but think the islands warrant a return trip, with some better tidal planning and a sacrifice to the weather gods. To be honest, I’d go back in terrible weather, just for the pleasure of Freda’s amazing cooking.

Photo by Kirsty Andrews - A small parasitic anemone, Callactis parasitica, on the side of a crab 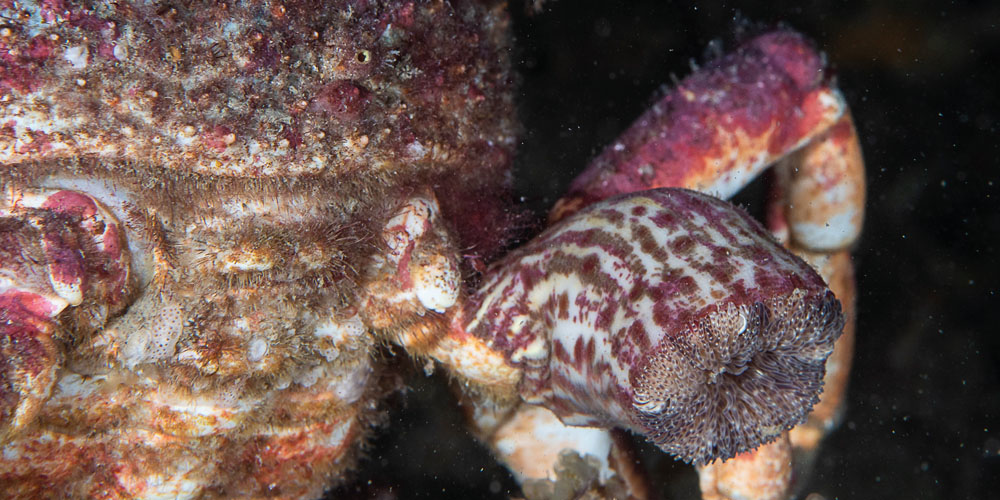