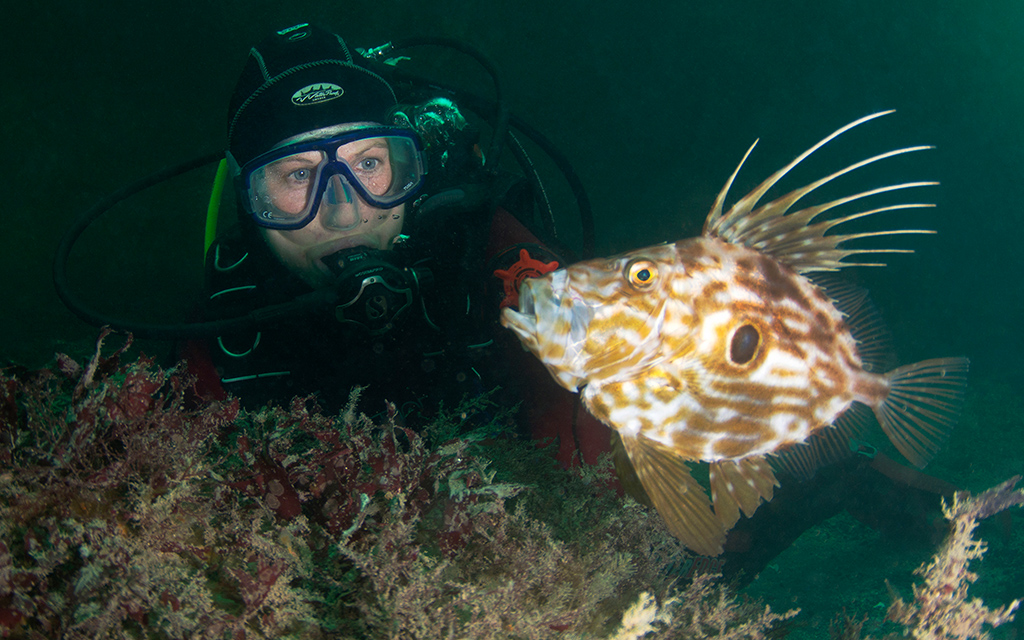 Paul Mylrea, an Advanced Diver and Open Water Instructor at Ariel Sub-Aqua Club, added an unexpected new dimension to his diving by becoming a Seasearch Observer. Here’s how he did it...

I love diving. My first dives in Stoney Cove in the December snow in a wetsuit didn’t put me off. Since then, I have been on a great journey into more adventurous and sometimes deeper diving. It’s not just the technical side that I love – although my buddies will tell you about my fondness for shiny new kit – it’s about seeing and experiencing something new and the camaraderie of club diving with mates.

The problem is, club diving doesn’t always mean novelty. As a training club, we have to look after our new members as they progress through Ocean Diver and beyond. Throw in the need for a regular launching point for the club boat, and a sprinkle (or deluge) of British weather on top, and it’s often back to diving the old familiar wreck that you know is protected from the elements.

How can you rekindle that sense of excitement and discovery? Well, I think I’ve found an answer… and there’s a bonus. Not only will you boost your enjoyment of every dive, but you’ll also be doing something to help the aquatic environment that we all love. That was how I found myself in a room above a hotel bar, overlooking Portland harbour, learning to look at the seabed differently. Around the tables were divers from my club, London-based Ariel Divers, and buddies from the neighbouring Richmond Sub Aqua Club, all eager to be trained as Seasearch Observers by National Coordinator Charlotte Bolton and Dorset Coordinator Lin Baldock.

Seasearch is a long-standing citizen science project that uses volunteer divers to survey the seabed around Britain and Ireland. The surveys create a vital record of the underwater landscape and marine life around the coast. And I mean vital: the data collected has tracked the impact of invasive, non-native species, as well as helping to create Marine Protected Areas around the UK. It helped identify damage caused by bottom trawling for scallops in Lyme Bay, ultimately supporting the creation of the Lyme Bay Special Area of Conservation. Seasearch data is made freely available to the projects sponsors and the general public.

Getting involved sounded easy and fun. First, you learn a bit about the marine life and environment you’ll be surveying. It’s all very well being able to distinguish between pollack and wrasse, but you need a little bit more knowledge to carry out a survey. This is why we spent the morning studying how to classify species of marine animals and plants. I have friends, who can reel off every type of nudibranch they have seen, but I’m a bit of a wreck head, and I had some work to do.

Who knew jellyfish, dead men’s fingers and sea anemones were all in the same group? And what on Earth are echinoderms? (Turns out they are animals, mostly with five arms, like starfish and brittle stars.) But thanks to our enthusiastic trainers, it soon started to make sense. Seasearch doesn’t expect Observers to be experts. “You should be as precise as you can, but only to the level of detail you are confident is correct,” explained our tutor.

Then we went on to look at underwater landscapes and sea cover. For me, this was the most eye-opening part of the day. I realised that for years I’d been looking out for wrecks and critters, but paying only sketchy attention to the seafloor itself. And who knew that seaweed could be so interesting? Before long, I was happily trying to distinguish between kelp parks and kelp forests, and identifying pod weed, Irish moss and landlady’s wig.

After a quick lunch, it was back to the classroom to learn how to fill out the Seasearch observation forms. If you’re used to keeping the dive slate up to date and filling in your logbook, Seasearch forms should be a doddle. But you would be surprised at what people get wrong. One of the key things is the location and it turns out not everyone can plot the right GPS location. You don’t have to be pinpoint accurate, just roughly in the right area. “It’s interesting when you get someone reporting sea pens in the car park, rather than 30 metres offshore,” said Charlotte.

Then the bit I had dreaded: sketching the seafloor. My last efforts at drawing may have been decades ago at school, but it turns out you don’t need to be Michelangelo to draw a profile of the seabed with some of the main elements of the cover and the marine life. It turned out fine. Photographs can help – as a memory prompt and to identify things after the dive – and stills and videos can be sent in with the Seasearch forms.

The Seasearch Observer theory course takes a day, but to qualify, divers also need to complete five observation forms: two of them with a tutor to provide guidance. We organised a club day out on our RIB the next day, to complete two dives while we were still fresh out of the classroom and with Charlotte on hand to give feedback. So, with our heads spinning with the difference between a cobble and a pebble, it was off to dinner before a 9am dive brief next morning. On other courses, there may be boat or shore dives organised by the Seasearch tutor.

Sunday dawned calm, with gentle waves and clear skies, so we were off in the club RIB for our first dive in Balaclava Bay. It’s tucked in at the northern end of Portland, just outside the harbour; the kind of shallow, sheltered dive site used for Ocean Diver training. Not a spot that would normally get my juices flowing.

In went the shot and four pairs of divers followed, each with a distance line and an agreed compass point to follow. My buddy, Maggie and I, both equipped with slates, set off north. Suddenly, what I would have thought of as a brownish mass became interesting. Was that pod weed? What about that feathery green stuff; is that mermaid’s tresses? And look, just underneath that unpromising bit of brown seaweed is a snakelocks anemone. Edible and spider crabs scuttled between the rocks. A juvenile ballan wrasse came to take a look before shooting off.

After a quick dive, we decided to head back and check our notes. Checking the distance line, I discovered we’d taken 15 minutes to cover just 12 metres. I had never spent so much time totally focused on the bottom. And it was great fun.

Back on the boat, we wrote up our findings on Seasearch forms. Can I just say that writing on a boat has its challenges? The conversation, however, was lively. “Did you see that…” “What about…” It was the kind of chat you get after one of those epic dives with big stuff. Everyone was buzzing, and it had only been a short dive on a seaweed-covered seafloor.

You will be pleased to know that Seasearch emphasises safe diving and good buoyancy, for your sake as well as the marine life. Good finning technique, tucking in dangling equipment, horizontal trim and keeping an eye on your buddy and your gauges are all emphasised.

Then it was off to the Countess of Erne just inside the breakwater, a wreck I have dived scores of times. We arrived just as two boats left the site, so the underwater visibility wasn’t the best. Yet I couldn’t believe how much I normally missed. The sides of the paddle steamer and coal hulk were littered with flatworms and a beautiful nudibranch. Cup coral and light bulb sea squirts were everywhere, and there were even some dead men’s fingers and a pink sea fan. Tiny fish fry sheltered between metal plates and a curious wrasse popped in and out of a hole to see what we were up to.

I had done two dives, the deepest to 14 metres, and had found a whole new way of seeing what’s around me underwater. I set off home from Portland clutching some of the marine guides produced by Seasearch. And I spent the next week explaining to my non-diving workmates the difference between pod weed and maiden’s hair. I’m not sure why some of them looked a bit vacant.

Our club is already planning more trips over the summer to log more observation dives. As Charlotte says, “There is loads of wet stuff out there. Go back to old school BSAC diving. Find something interesting on the sounder, chuck some divers in, see what’s down there and tell us.”

Seasearch has certainly added a new dimension to planning our dive calendar. So if you fancy a quick course with lasting benefit to your diving, what are you waiting for? Give Seasearch a ring and get to grips with seaweed!

The Marine Life Appreciation course is open to any BSAC member. No diving qualification is necessary to take part, but there is an optional underwater session for qualified divers.