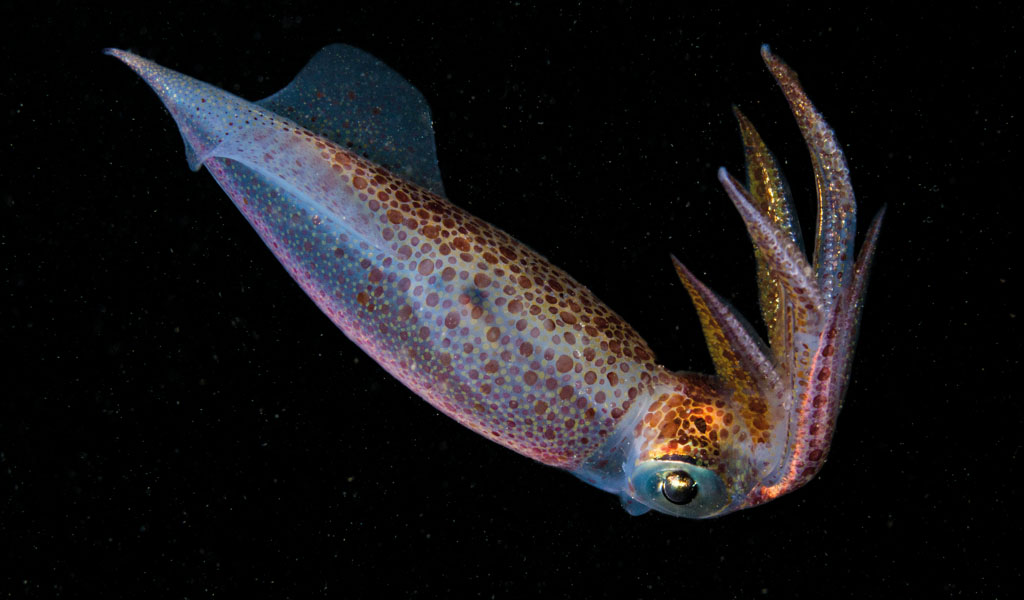 An encounter with a member of the cephalopod family – octopus, cuttlefish, squid – is something to relish. Kirsty Andrews looks back at some unforgettable dives with the adorable suckers.

As a BSAC diver and a British underwater photographer I love to take photos in UK waters, and show friends and family how wonderful UK diving can be. In particular I like to show off the great species that can be found in our home waters. There are definitely some stars of the UK marine show, and recently I’ve found myself fascinated by our cephalopod chums – the family of octopus, cuttlefish and squid.

Cephalopod means ‘head foot’ which is a literal indicator that members of this species have tentacles attached to their heads. They often have a large brain and particularly good eyesight. They can be fiendishly clever – from daring escape artistes to camouflaged hunting to predicting football results (personally I’m not sure about that one). Ultimately it is this intelligence which fascinates us, but the fact that some are fellow UK residents is pretty cool too.

For me, rather excitingly 2017 was ‘the Year of the Octopus’. Not that I saw them on every dive of course, but from the North of Scotland to the South coast in Devon, I’ve seen far more than in previous years, which has been great. There have also been tales of multiple octopus strandings in beaches in Wales after our autumn of heavy storms and in 2018 after Storm Emma – not so great, but perhaps indicative of a population boom.

In the past I’ve sometimes been lucky enough to see one or two octopuses a year and it has almost always been in a marine protected area, mostly in Pembrokeshire in West Wales or the marine conservation zone in Eyemouth on the Scottish borders. Accordingly, rightly or wrongly, I consider them to be a sign of a healthy ecosystem and a demonstration of the success of these marine protection initiatives. Whether the increased numbers are a healthy sign, or maybe down to temperature change or other changes, I will leave it to others to decide.

Recently I had the pleasure of spending a few days diving in Shetland. On only the second dive I was thrilled to spot a small curled octopus hiding under kelp – and then immediately frustrated as my camera had frozen and I was unable to capture the moment (operator error in putting camera in housing, as it turned out). I recounted this to my buddy, local diver and ecologist Dr Richard Shucksmith, who was completely unsympathetic and casually remarked that I was bound to see more, and not to worry. Sure enough, on my next dive I saw eight! Shetland appears to be a real octopus hotspot – I saw them on most dives and I even saw otters enjoying octopus as a snack more than once.

One particularly interesting sight was a small octopus dragging around a rather large razor clam. Once it had escaped this pesky photographer it clearly intended to settle down for dinner. Octopuses like to eat crustaceans and it’s often a tell-tale sign of a den to see the leftover crab carcasses lying about. This was my first razor clam-eating octopus though; perhaps Shetland octopuses enjoy four-star cuisine.

In Scotland it is the curled octopus (Eledone cirrhosa) that proliferates. This species has a single row of suckers and is sometimes also called the lesser octopus. I don’t know why it would deserve such a lowly title, except that is mostly smaller than its cousin the common octopus (Octopus vulgaris), which has a double row of suckers and is more likely to be seen in the warmer waters in the South.

I spotted this common octopus on a night dive at Babbacombe at the start of November this year. Fellow South Coast divers will know Babbacombe in Torquay, as a shore diving site which rarely disappoints and often offers spectacular subjects, but this octopus was a first here for me. 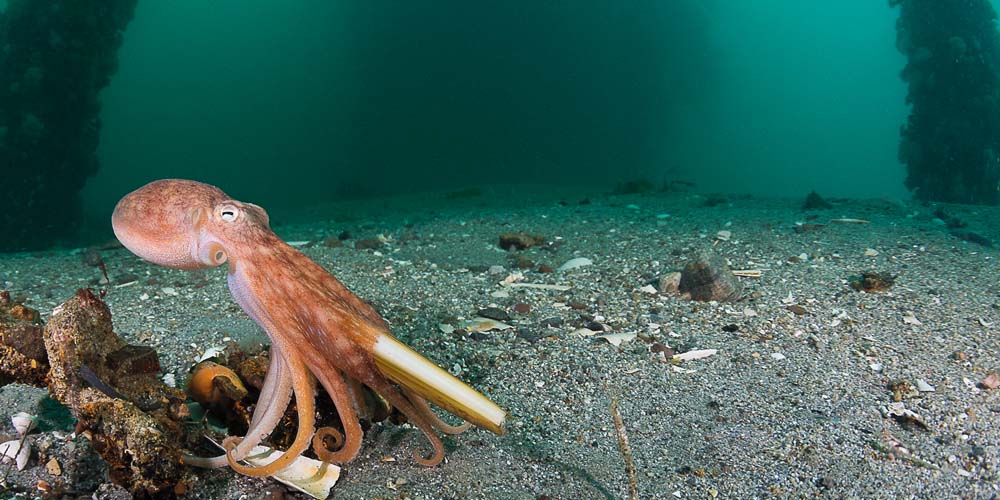 Babbacombe is probably best known for its cuttlefish (Sepia officinalis), particularly in late Springtime during the mating season, when feisty males flash zebra colours in their competition for female attention. The Torquay population has noticeably declined in recent years, which I believe is due to overuse of pots, especially (and cynically) deployed in the middle of breeding season. Despite this, some cuttlefish can still be seen here fairly predictably. The Springtime mating antics are a draw for divers but they tend to coincide with the frustrating ‘Maywater’ – the seasonal plankton bloom which really muddies the waters and gives photographers a headache.

I am particularly fond of cuttlefish. I love the way they patrol our rocky reefs, hovering like spaceships, and the various gestures they make, including one which looks suspiciously like ‘giving the finger’. We divers could learn a lot from their effortless neutral buoyancy; theirs comes courtesy of the cuttlebone, and like octopus, they can blast water out of their funnel to speedily escape from predators or annoying photographers.

They can be difficult to spot on the reef due to their fantastic camouflage. Their skin is made up of chromatophores or pigments that they can change, expand and contract at will to create patterns, signal or blend in with their surroundings. Not bad for a creature understood to be colour blind. I was mesmerised by a sequence in Blue Planet II (thanks Sir David) where a cuttlefish flashes to hypnotise its prey – UK cuttlefish could do the same.

It’s a special privilege to see these creatures in action. I’ve already described the impressive zebra displays of cuttlefish males during spawning season. At this time you can also see the females laying their eggs, which look like strings of black grapes. There is something really maternal in the way the female carefully attaches the eggs to a kelp frond and then repeatedly wafts them with oxygenated water, while the male stands guard. As they are so consumed by the activity, it’s possible to approach quite close without disturbing them.

I’ve also been lucky enough to see cuttlefish feeding, on another of my favourite shore dives, Drawna Rocks at Porthkerris in Cornwall. At around dusk the cuttlefish were pretty active, camouflaged among the bootlace weed and sneaking up on their fishy prey before darting out a tentacle to capture the hapless fry at lightning speed. They have two tentacles specially adapted for this type of grab feeding. 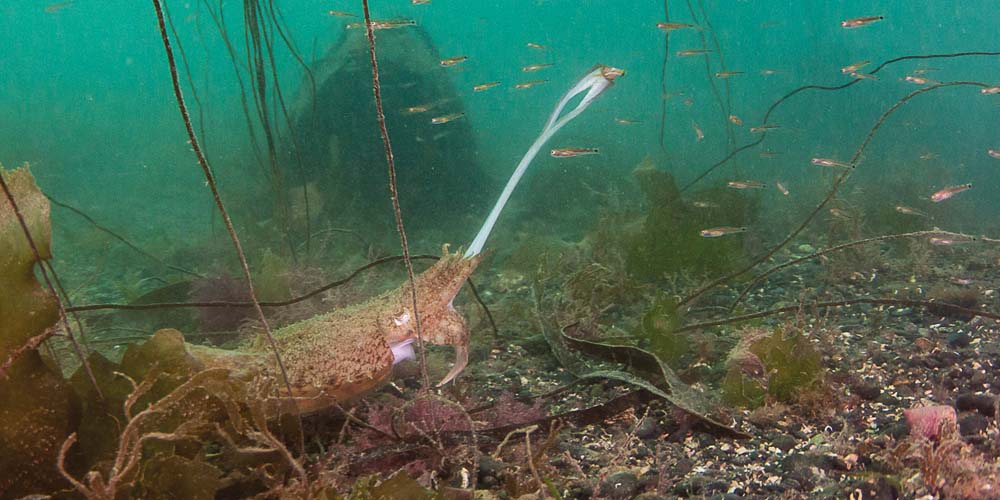 Squid tend to live in the middle of the water column and so are less often seen by divers than some of their cephalopod cousins. We are far more likely to see their egg masses, like strings of pearls attached to rocks. Squid get together to lay eggs, so one set of eggs is likely to be the product of multiple squid parents.

To see squid themselves, the best chance is to dive at night when they are out and about hunting. In the winter months and particularly after the clocks go back I love to night dive in the UK; our rocky reefs are generally closing up for winter but there’s still a good chance of seeing night-time hunters like squid. Sandy-bottomed shore dives are perfect for this. I’ve often seen small individual characters, which if I’m lucky will stick around a little, fascinated by the flashes from my camera strobes. Every now and then I’ve also seen groups of larger squid – around 12 inches long – but these have proved elusive to my lens so far. Even more incredibly, squid of many metres in size have been reported in UK waters, which would be a formidable sight indeed. 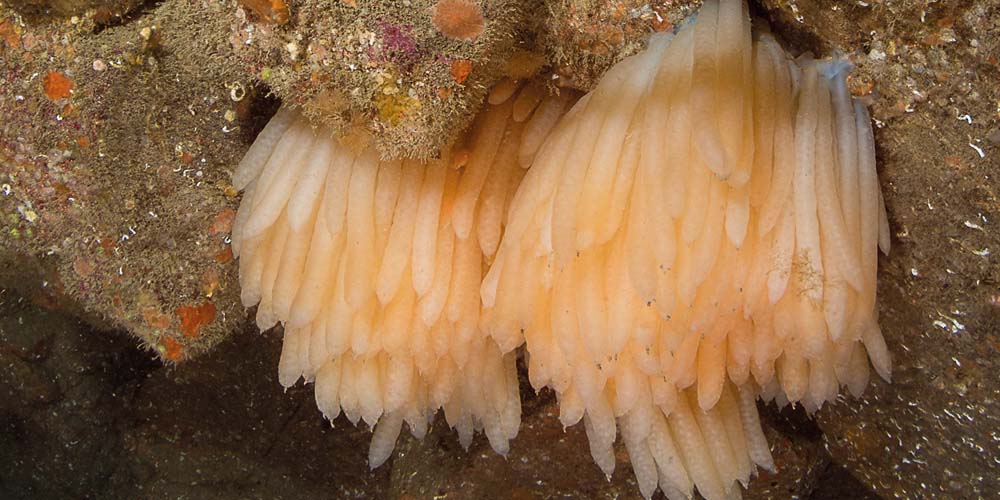 In similar spots to squid, over sandy seabeds at night, little cuttles (Sepiola atlantica) are worth noting for the eagle-eyed diver. They often bury themselves in the sand with only their eyes discernable in the torchlight. If you wait patiently they might move on, and you can see that they are very similar to their cuttlefish cousins, including the feisty tentacle display and maybe the odd disgruntled squirt of ink.

Otherwise, they are smaller, only about 6cm, and their body shape is more compact and rounded. In more exotic climes you may have come across close relatives of our UK little cuttles, under the name bobtail squid - more of the Sepiola family. What a treat to be able to see them in our native shores as well. 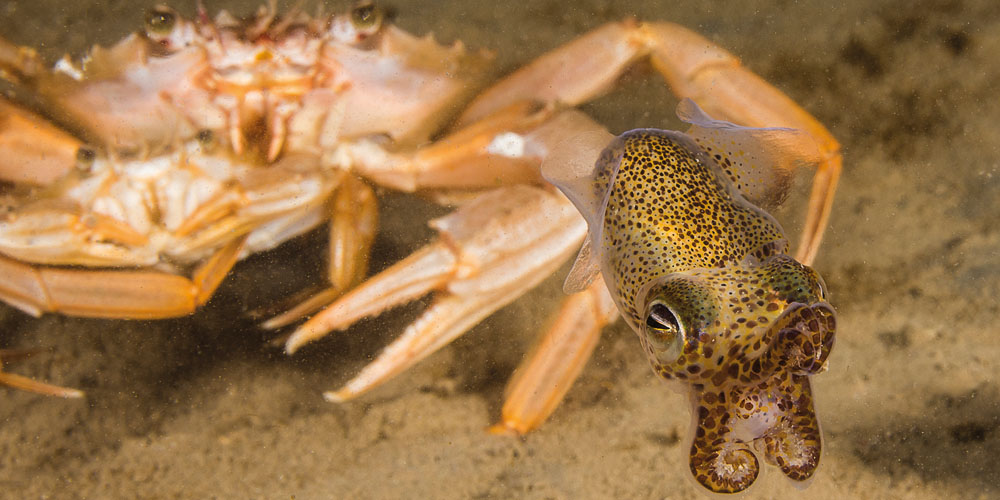