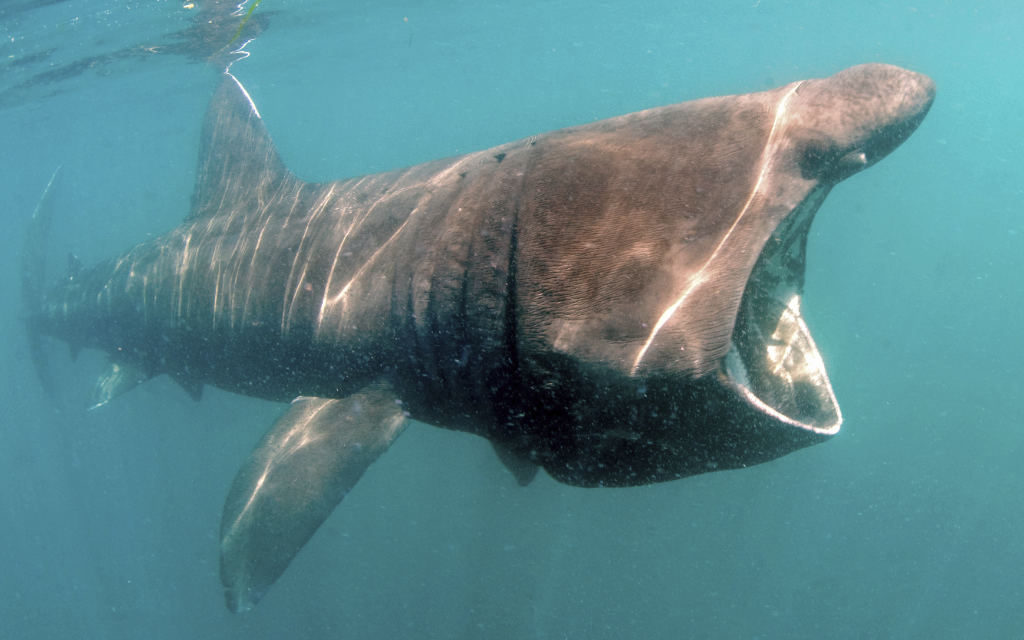 Basking sharks have already started to arrive around the British coastline, and BSAC is supporting the Shark Trust in encouraging its clubs, members and other divers and snorkellers to record any sightings to the basking shark Sightings Database.

The diving and snorkelling community can provide vital data on the movement of these endangered sharks. The Shark Trust hopes that more sightings provided by those out on the water will help improve our understanding of these magnificent sharks.

Each year these mighty fish return to British waters to feed on plankton. From now until October you may see one, or even a few, feeding at the surface of the water. Where they look like they're basking in the sun. Thus, their name!

Today, basking sharks are one of the most heavily protected sharks in UK and EU waters, but this wasn't always the case. From 1946-1995 basking sharks were heavily fished in the Northeast Atlantic, targeted for their liver oil for use in lamps, their meat, and for their large fins, which were prized in the shark fin trade. This intense fishing pressure meant basking shark populations were driven to collapse.

Basking sharks are listed as Endangered on the IUCN Red List of Threatened Species. Although they are no longer targeted, they can still be caught as bycatch or become entangled in lost fishing gear. Monitoring, management, and further research is vital to ensure their survival.

Basking sharks have historically been overfished and as an Endangered species they are still rebuilding populations, so it’s vital we help protect them as a key part of our natural world. They’re one of the few shark species that has made the transition to being viewed as marine wildlife rather than as commercially important stock. There’s so much exciting research going on for this species. We’re still finding out so much about them and the more we know, the better we can protect them.

Basking sharks are slow growing, long-lived, late to mature, and produce few young. This makes them extremely vulnerable to human impacts. Once populations have declined, they can take a long time to recover.

“While we need targeted and well-funded scientific research to fully understand the status and potential recovery of basking sharks, we can all play a part in filling the gaps.” says Paul Cox, Managing Director of the Shark Trust,

Each sighting a from boat user, when added to our database, provides a piece of evidence that can help scientists draw conclusions. We’re really grateful to all our citizen scientists for the part they play in shark conservation and research.

BSAC is supporting this initiative by asking members to record any sightings of basking sharks.

Basking sharks are extremely vulnerable to disturbance and harassment by water users, so, as part of the basking shark Project, the Shark Trust has created the basking shark Code of Conduct. By following this advice, you can enjoy watching basking sharks while ensuring a safe encounter for both you and the shark. Remember the sheer size of the sharks warrants respect and caution. It's also illegal to intentionally disturb or harass basking sharks in UK waters.

Seeing basking sharks swimming in our seas is an incredible experience. There is nothing quite like spotting their fins cutting through the surface and then seeing their mouth open wide as they feed at the surface. Their arrival to our coastline, and each and every sighting, is an exciting event. Please ensure any encounters this summer are done so safely, for you and the shark, and that you tell the Shark Trust all about it!

What you can do to help basking sharks: