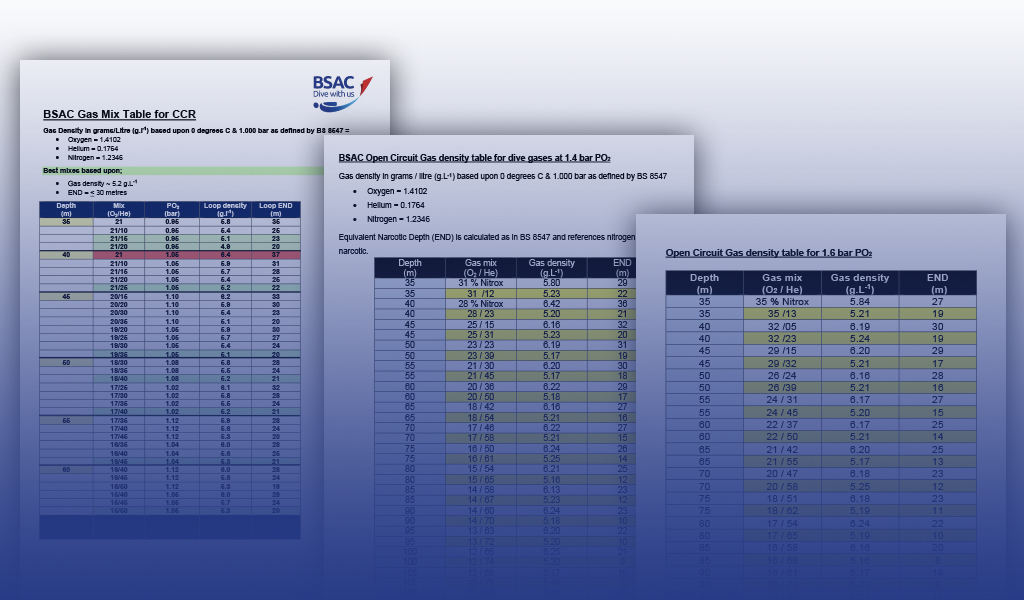 In recent years there has been an increased understanding of the importance of gas density in gases breathed under pressure. BSAC has now released tables that recommend breathing mixes for open and closed circuit divers.

The tables were specifically developed for mixed gas divers but gas density values also have implications for informing safe depth parameters for air and nitrox divers.

The new tables align with findings from research conducted by Gavin Anthony and Professor Simon Mitchell that were presented in 2015 in a paper entitled Respiratory physiology of rebreather diving. Gavin is a BSAC member and Advanced Instructor, as well as the principal scientific advisor for BSAC National Diving Committee (NDC) Technical Group. He has been involved in the development of these tables from inception through to publication. The tables were then formulated by BSAC Technical Instructors Trevor Davies and Mike Rowley.

I’m thrilled to be able to release this really important safety support for our members. Gavin and Simon made the research freely available online but the point of developing look-up tables was so divers can see at a glance what the optimum gas mixture is for any given depth and application.

So what is gas density and why is it important for divers?

Gas density is a measure of mass per unit volume, measured in grams per litre (g/l). The deeper you go the density of the air you breathe increases. A high gas density means a given volume of gas weighs more and takes more effort to move, resulting in increased work of breathing (WOB).

Gas density is why WOB increases as we go deeper, and increased WOB, in turn, predisposes divers to CO2 retention. It is increasingly accepted that elevated breathing gas densities are dangerous and may well be implicated in exacerbating a range of diving ailments including not only CO2 retention but also O2 toxicity, nitrogen narcosis, decompression illness and immersion pulmonary oedema. Furthermore, elevated gas densities can impair the performance of breathing equipment such as regulators and rebreathers.

The role of gas density and its relevance has not been universally addressed in diving education. However, BSAC is now assisting divers in factoring this into diving planning with these new tables. The tables allow the diver to readily see optimum gas mixtures based upon gas density therefore they are a proactive planning tool.

The National Diving Committee (NDC) will be working on and considering the above in its ongoing developments.

What are the tables exactly?

A webinar entitled The lowdown on gas density tables is scheduled for Sunday 21 June from 19:30-20:30. To be held by BSAC’s highly-experienced technical instructor, Mike Rowley, this webinar will help you understand more and give you the opportunity to have your questions answered. Find out more and sign up online.

Alternatively, please contact the Diver Resources Team with any questions, comments or feedback. They are available at drt@bsac.com or on 0151 350 6203.

Feed your love of tech diving

While some of us may be ending our extended surface intervals, there is still plenty going on online and now is the perfect time to indulge your love of tech and brush up on skills online… especially for tech diving wannabes and old-hands needing to refresh.