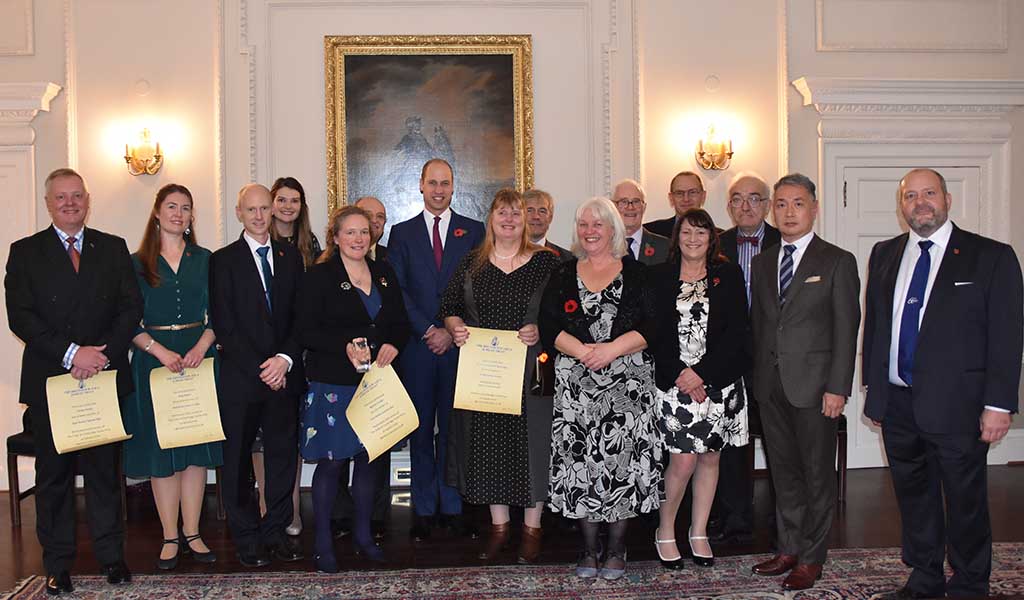 The Duke of Cambridge Scuba Prize is awarded annually to the BSAC member or group of members for outstanding achievements in research in scuba diving.

We are very proud to say that the President of BSAC, HRH Duke of Cambridge, presents the Award annually to the winning project team and congratulates the highly commended projects.

The winning project of The Duke of Cambridge SCUBA Prize 2018 is The Gun Rocks Cannon site project.

Congratulations to the project team leader Nicola Faulks and team members Peta Knott and Simon Smith who received the Award today presented by BSAC President HRH the Duke of Cambridge, at a ceremony in Kensington Palace.

Two teams were also Highly Commended in The Duke of Cambridge SCUBA Prize 2018:

The Gun Rocks project is Tyneside 114 BSAC branch’s ongoing involvement with a cannon site in the Farne Islands, Northumberland.

This latest phase of Gun Rocks Cannon Site project started in earnest in April 2017 when kelp was cleared from the cannon. The site was re-mapped, and the centre of the site was shot from the surface, to enable easy location for other divers.

Check out the Gun Rocks history and dive trail website for more information.

The installation of a dive trail required a Marine Management Organisation licence which was not agreed until September 2017. The dive trail was successfully installed by 4 May 2018, for the start of the main dive season. The sitemap has been updated with the exact placement of the lines around the site and printed/published on the website.

During the 2017 dive season, photogrammetry surveys were undertaken, and 3D models created for the website. Various anomalies were also dived and investigated: these discovered 2 additional cannons which bridge the gap between the main cannon site and a secondary smaller site.

Leaflets on the history and marine life of Gun Rocks have been distributed through the local dive operators and Tourist Information in Seahouses and can be downloaded from the website.

Tyneside 114 BSAC Branch will continue to maintain the dive trail, by clearing kelp, replacing ropes and the marker buoy annually at the start of the diving season. Archive research and examination of the photogrammetry models will be ongoing too, with an ultimate aspiration to one day establish the origin of the cannon and the name of the ship that brought them to Gun Rocks.