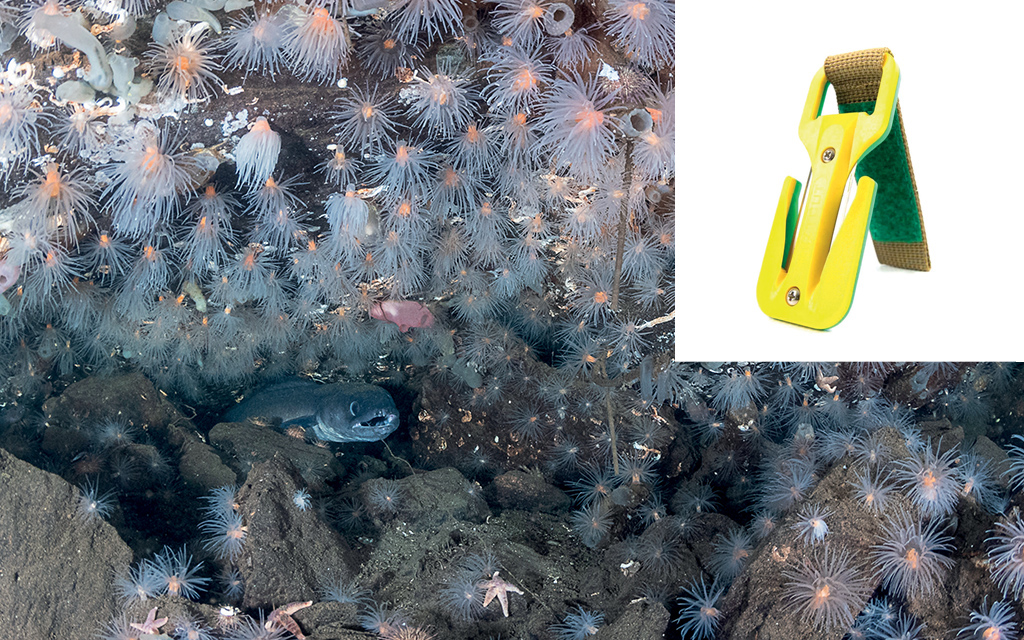 A dive amid a tangle of ‘ghost’ fishing gear prompts Kirsty Andrews to reassess her emergency escape protocols.

On a recent dive, as I navigated a dark sea loch, an odd mental picture sprung into my brain. Have you seen Catherine Zeta-Jones in the film Entrapment? It wasn’t the smoky eye makeup, lilting Welsh accent or the come-hither expression that rang a bell, you understand, but that bit where she has to contort herself into ever more athletic positions to avoid the maze of pink string / alarm lasers and steal something or other [ It was an antique Chinese mask – Trashy Film Editor]. Except that this was distinctly less glamorous, didn’t involve an ogling Sean Connery and no theft occurred.

If this rather ancient cultural reference from the previous century is lost on you, I will explain - I went for a dive and there was more old fishing line than I had ever seen underwater. Mostly it was that pernicious monofilament line that is often tricky to spot. It stretched from boulder to boulder at seemingly every angle, just ready to catch an unwary diver. Every so often I would pass a sad sea creature who had fallen into the trap. I did manage to cut a conger eel free but everything else I saw was already dead.

I hasten to add that I didn’t mess with any live fishing activity and no fishermen were there at the time - this was all old stuff or ‘ghost fishing’ gear. The relationship between divers and fishers is a complex one and others are far better placed than me to opine on it, so I don’t intend to be especially critical here. Of course I wish that ghost gear did not exist, but I realise to an extent that it’s inevitable where there is fishing. I was more concerned with my buddy’s safety and my own.

At one stage in my diving career I wore a leg-mounted bigger knife..

I was on high alert and kept much closer to my buddy and further from the reef than usual, with my line cutter to hand. In fact, I got to thinking about what cutting gear I brought with me and whether it was sufficient. I am a big fan of the Eezycut trilobite tool, which I’ve used ‘in anger’ a few times. For thin monofilament line it works a treat. I also consider where best to place it: a waist mount is a good option but I have taken to wearing mine on my computer wrist strap. I have experimented and I can access this even with one hand, if the other should be caught (a scenario I’m nonetheless keen to avoid). I’m now thinking of doubling up with one back on my belt too.

At one stage in my diving career I wore a leg-mounted bigger knife, but being totally honest I feel that was more of an entanglement hazard than a help, and I query whether I could access it when needed. Those seem to have gone a bit out of fashion. I do rather like the knives that have a scissor-type element, as they can be very effective at exerting pressure during the cut; shears are similarly well-designed for underwater use. Mount them wherever you like, as long as you can access easily and it doesn’t present a new entanglement point. A torch is also an essential in dark places where hazards can be late to show themselves. To quote words we’ve heard fairly often recently: Stay Alert and Stay Safe, diving friends.

Diving safety is essential to all divers. We want all scuba divers to focus on prevention rather than the resolution of incidents.