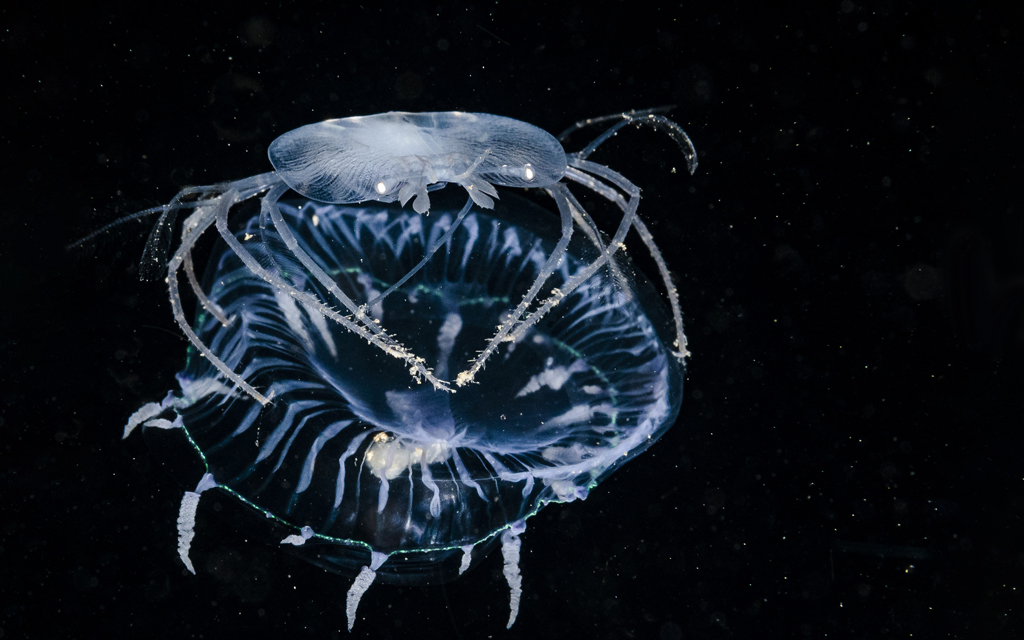 Looking at some of my diving photos, a friend recently remarked to me that the subjects were otherworldly, like alien creatures. This is hardly a surprise, in that much science fiction has been inspired by real creatures in some way; creative writers and film-makers have definitely drawn ideas of both appearance and behaviour from real-life examples, often in the deep sea where for years and years (and to a large extent still) the sea and its inhabitants retain a veil of mystery.

How many of you have read Jules Verne’s 20,000 Leagues Under the Sea? His tales of exploration and adventure, written more than 150 years ago, led us not just under the sea but to the centre of the earth, and from the Earth to the Moon. All fantastic places with the potential for exhilarating discovery.

As for divers, well, we bear rather a resemblance to astronauts in many ways, don’t we? We take noisy breaths of carefully controlled gases. Our equipment isn’t too far off an astronaut’s rig in terms of bulky self-contained set-up with some technical niceties to comply with.

We are still subject to the laws of gravity, but we can use our equipment to glide neutrally buoyant in all directions. In fact, astronauts obtain scuba diving qualifications and use water as part of their training, simulating neutral-gravity spacewalks underwater. There is even a fishy-sounding NEEMO unit (NASA Extreme Environment Mission Operations) where budding aquastronauts can train, living in an underwater research station for days, practising spacewalks and techniques for using tools and performing experiments in an environment analogous to space.

We divers boldly go into unknown worlds, to document what we see, sometimes venturing where no human has been before. We’re far luckier than astronauts in that way, as it’s not a barren lifeless environment that we see, but a biodiverse wonderland of incredible variation and complexity. We can make discoveries of unfamiliar beings, and in doing so we mostly don’t need to hold ‘we come in peace’ signs. Mind you, any hand signals made by me in my favoured three-finger mitts are notoriously difficult for human buddies to decipher, but are almost perfectly designed for a Vulcan salute to ‘live long and prosper’; so I can manage that at least. Some of us even carry light-sabre-like torches, which apparently are intended to illuminate a reef rather than channel the Force, although sometimes their bearers forget that.

Nowadays the prospect of space travel as a leisure activity is nearer than it has ever been. The likes of Elon Musk and Richard Branson are busy turning such dreams into reality and the future is exciting and slightly terrifying - although of course, still only likely to be possible for a privileged few. Today, fewer than 600 people have been to space, whereas we divers number in the millions worldwide. Despite this, how many times have you heard the phrase that we know more about life on other planets than we do at the bottom of the sea? There is so much more for us to discover!

Who would be an intergalactic traveller when you can be a scuba diver? If you too are a frustrated astronaut, console yourself with the advantages we can hold over our space-hopping brethren; re-entry for us is distinctly less perilous, and we can be back home in time for tea.

I'm interested in learning to dive, how do I get started?

You can either do a Try Dive taster session (Covid restrictions permitting) with a local BSAC club or a BSAC Diver Training Centre first or get started straight away from the comfort of your own home with BSAC eLearning! If you’d like to talk through your options, call us on 0151 350 6201 (Mon-Fri, 09:00-17:00) for a chat!

Book a Try DiveSign up for eLearning