What happens if you fart in your drysuit? 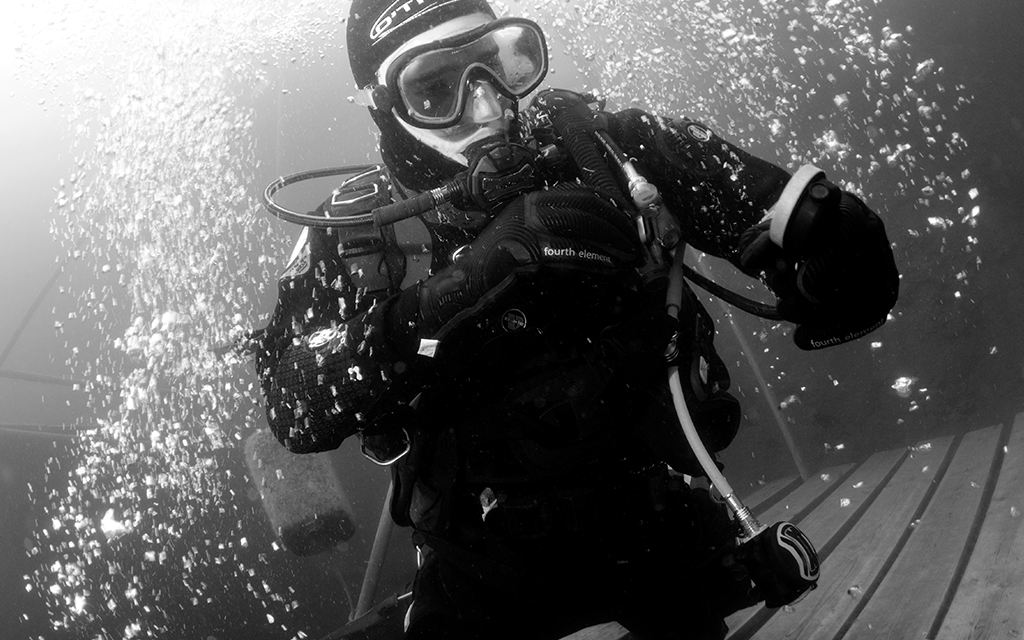 A malodorous memory prompts Michelle Haywood to research the scientific implications of farting in one’s drysuit.

I once sat next to a buddy of mine on the way out to a dive and mid-conversation a pained expression crossed his face. That happens to me sometimes when I talk to people anyway, so I thought nothing of it until I was enveloped in a cloud of fart gas that had escaped his rectum and then popped out via the auto dump on his shoulder next to me.

He laughed and apologised, in the ‘I know I need to apologise but I really don’t mean it’ way that some men have when it comes to bodily functions. Fart incidents are just as funny when you are 40 as they were when you were four. And I guess the fact that I can remember it and his “I had a curry last night” justification years later meant it had a lasting impression on me too.

It got me thinking about farting in a drysuit. In theory, there should be no change to your buoyancy, as long as the fart gas stays in the suit. But a drysuit auto dump maintains a constant volume of gas in your suit, and by farting you’ve just added to the volume in the suit. Lose that gas and there will be a tiny drop in your overall buoyancy. So how much gas are we talking about and what is it anyway?

Up to 2kg of bacteria inhabit your intestine and feed off the food that you consume. Some of those bacteria produce gas as a consequence. Men are more prone to farting than women (average 13 times a day vs 8 for women), and the average fart is around 100ml of gas. A diet high in fibre generates more farts, as the complex carbohydrates are broken down by the bacteria into hydrogen, methane, hydrogen sulphide and at least 250 other gases. Holding in farts can be dangerous and has been associated with pain and a possible risk of developing irritable bowel syndrome.

A few years back there was a phase of using argon as a suit inflation gas. There were some considerable problems with this, including the need for a dedicated cylinder and regulator, the hassle of getting argon fills and the need to repeatedly flush air out of your drysuit. The supposed benefit was that argon had a lower thermal conductivity than air. Thermal conductivity is measured in milliWatts per metre Kelvin, essentially how much energy is transferred across a temperature gradient.

For air, that figure is 26.2, for argon it is 16.0. So, argon conducts about a third less energy than air. Of course, these figures change slightly at depth; as gases become more dense they will conduct heat more readily, but the principle that argon is more insulating holds true. In practical terms, we use argon in double glazing units, but it’s too much of a faff for diving, and it was hard to feel the difference.

The thermal conductivity for some other gases, though, is much lower. Could it be that farting in a drysuit has the same warming effect as weeing in your wetsuit? Methane at 11.4 is excellent (though combustible). Hydrogen comes in at 10.4 which is even better, though still with the explosive issue. Hydrogen sulphide (the eggy smell) is 18.0, so although easily detectable isn’t much better than argon at keeping you warm. There’s a fair proportion of carbon dioxide which isn’t very thermally conductive coming in at 16.8. So my theory looked hopeful, fart gases delivered at body temperature might slow heat loss in your drysuit.

In a fart with up to 250 different gases, the proportions of each gas becomes critical to the overall heat loss reduction. It turns out that up to a quarter of the gas released in our farts is simply oxygen and nitrogen from swallowed air, so that dilutes any thermal retention effects from the other, more insulating gases. And farts vary enormously between people and on different days. Only about a third of people have the gut bacteria that produce methane, which is one of the better gases for thermal insulation.

Sadly, there’s just not enough farts to go around.  If you use a suit inflation cylinder you’ll get an idea of how much gas is used for buoyancy. Obviously, this is quite personal and depends on depth, undersuit worn and how well weighted you are, but somewhere in the region of about 70 litres isn’t unreasonable. If each fart is around 100ml on average, there’s a big gap between supply and demand. Consider the whole ‘flush the air out of your suit’ palaver to remove the air and replace it with fart gases. How on earth is any diver going to muster enough farts on command to flush out the residual air? Beans for breakfast anyone? More Brussel sprouts? You might be better investing in a good undersuit instead.