The science of preserving maritime artefacts 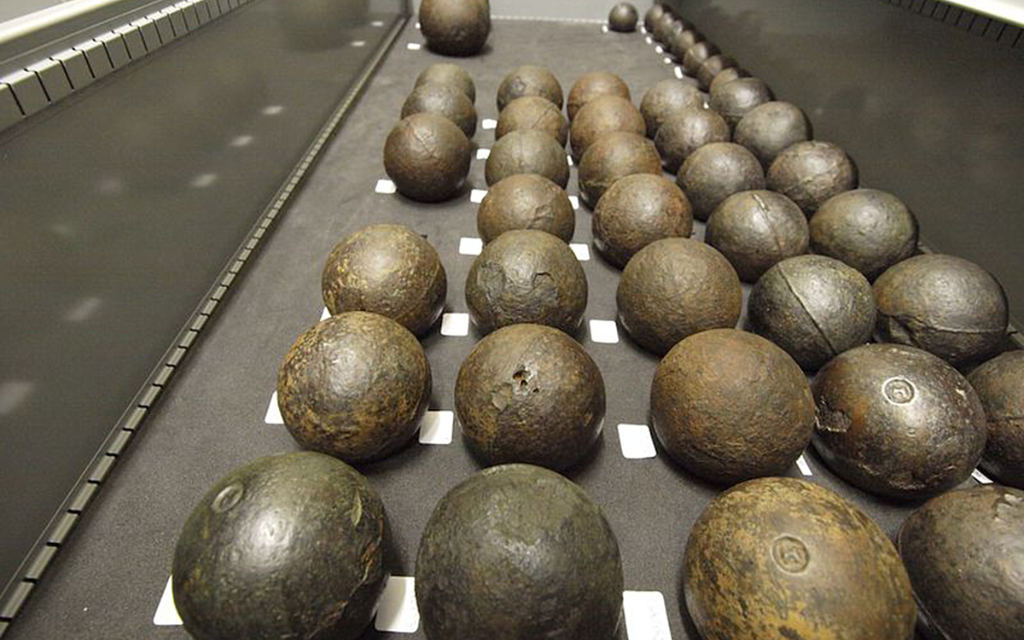 Michelle Haywood casts a scientific eye over processes used to clean and preserve artefacts raised from the sea.

Several years ago artefacts were removed from a Manx wreck site by a team of divers. These items were all properly declared and most of the more interesting parts now reside in the national museum. Of particular note from this wreck were the cannon and the pile of cannonballs that was recovered.

The cannon was placed in a riverbed for more than a year, where the flow of freshwater gradually washed away the salt.  Several of the cannonballs were subject to other treatments; one spent a year in the cistern of the owner’s toilet being rinsed several times a day. After hoping this rinse was enough, cannonballs were dried out, either naturally or in an oven.  Then 30 years later it emerged that only two out of about 20 had survived their time on the surface.  Many had crumbled away as the ferrous corrosion products pushed the structure apart.

A year or so ago we recovered a bell complete with the wrought iron hanger (some three feet long) from a wreck, again with the requisite permission and declaration. The wrought iron showed clear delamination and years of rust encrustation.  Even as it dried on the deck on the return to harbour, material started falling away.  We knew we had a race against time to prevent the degradation totally destroying the hanger, and someone pulled out a magazine article that introduced us to the concept of cleaning and conserving the iron using electrolysis.  A 240-litre wheelie bin served as the electrolysis vat and a battery charger provided the DC current required.

Cleaning the chloride and the iron oxide from the surface (and the deep layers) in the hanger turned into a six-month project. For electrolysis to work you need electrodes and an electrolyte to carry the current. Our hanger served as the cathode (the negative terminal) in the setup. Positively charged ions travel towards the cathode, reduction occurs as electrons are transferred and hydrogen gas is formed.

In the process, some of the positively charged metal ions on the surface are also reduced to their metallic state. In addition, negatively charged ions are drawn from the hanger, so the chlorine compounds break down and the chlorine is attracted to the anode.

We selected stainless steel as our anode. The anode is the positive terminal, so negatively charged ions and particles are attracted, oxidation occurs and oxygen is evolved.  In order to supplement the number of charged particles to act as an electrolyte, we used 3% caustic soda (sodium hydroxide), bought in large quantities from the local hardware store. I’m not sure if they believed what we were using it for!

The next step was to dry out the hanger, but this was a piece of ironwork that was simply not going to fit in a standard oven. Someone helpfully suggested cutting it up, but that seemed sacrilegious after the poor thing had spent 102 years on the sea and been recovered intact. Happily, one of our divers knew that car body shops often have much larger ovens.  We started out gently at 140ᵒC and over the course of a week, the temperature was lifted to 180ᵒC. Finally, nearly eight months after the hanger was recovered it was stable and protected from further degradation by a high-tech polymer coating.

The whole process was lengthy and involved far more practical science than we’d expected.  Our work experience students across the summer were particularly impressed with seeing electrolysis in action because it’s fairly boring as part of the science GCSE course. Being outside meant we avoided the possible issues that might arise from generating hydrogen and oxygen gas. We had to move the hanger several times to ensure that each part received a reasonable current flow during the process. This was a challenge dealing with a wheelie bin full of caustic soda, which meant wearing suitable safety gear. It was a far cry from the ‘drop it in the river’ approach of a few years ago, but the hanger is stable now and heading off to a museum at the first opportunity.