The loneliest places on our planet 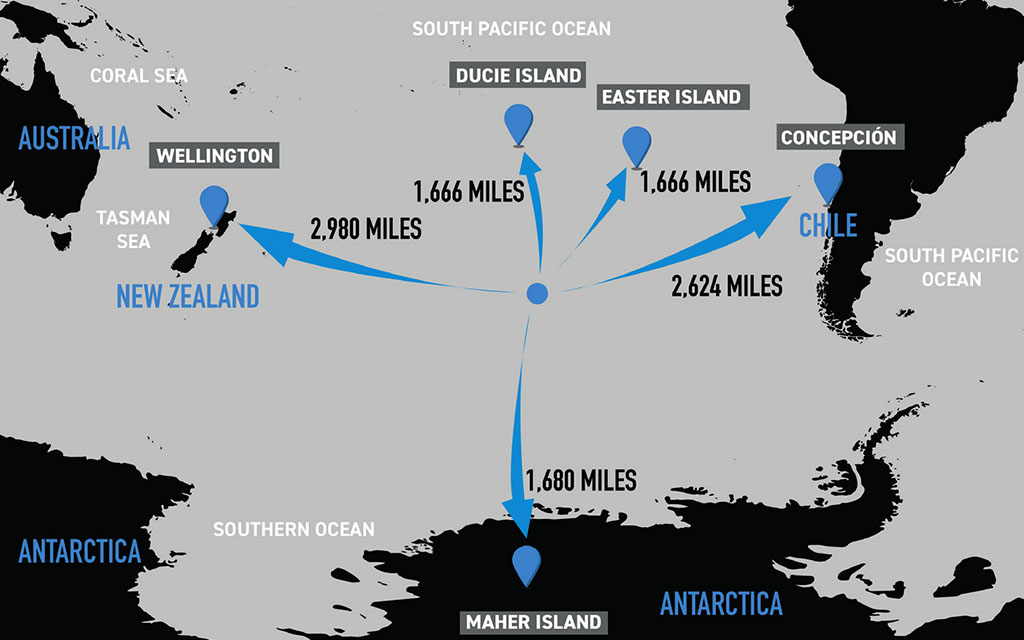 Simon Rogerson looks at the concept of geographical remoteness, identifying some of the loneliest places on our planet.

Hello there. I’m filling in until we find someone to replace our recently retired science writer, Michelle Haywood. Around this time of year – glass of brandy in hand, fire burning in the grate – I like to pore over the charts in search of promising dive locations. It occurred to me the other day, that for every place I’ve visited, no matter how remote, there’s always been talk of some even more isolated spot, with stories of strange beasts and undiscovered shipwrecks.

Zoom in on any lonely patch of ocean, and you’ll find satellite islands you’ve never heard of, always claimed by a nation, yet unoccupied save for penguins (or puffins, depending on the hemisphere). The UK’s example would be Rockall, the uninhabitable clump of rock 187 miles beyond the outer island group of St Kilda, West Scotland. It’s a legend in the diving community, a place so hard to access that stories of actually diving there take on a mythic quality.

Finding the most remote locations

Let’s go to extremes. If you’re looking for splendid isolation, the place to go isn’t the wide Pacific, but the turbulent South Atlantic. It’s home to the volcanic island of Tristan Da Cunha, technically the most remote populated point on Earth, some 1,750 miles from South Africa. The most remote rock of them all is Bouvet Island, a completely uninhabited speck in the South Atlantic, in the sub-Antarctic zone. What would diving be like around such a lonely patch of rock and glaciers?

Want to go further? Without leaving the planet, the most distant point from any land whatsoever is the Oceanic Pole of Inaccessibility, 1,680 miles from the nearest land points of Ducie Island in the Pitcairn Group (to the north); Motu Nui off Easter Island to the northeast and Maher Island off Antarctica to the south. This no-man’s land has been dubbed Point Nemo (‘Nemo’ being Latin for no-one). Sometimes, the nearest humans are the astronauts on the International Space Station as it passes by overhead.

Below the blue surface

Does this removal from human habitation guarantee a rich and thriving marine ecosystem? Unfortunately, no. All signs are that the waters around the Pole are relatively lifeless, as its location relative to the South Pacific Gyre blocks oxygen-rich nutrients from entering its vicinity. Scientists have described Point Nemo as being the least biologically active region of the world ocean.

While researching this article, I tried to establish a maximum depth for the area, but the data doesn’t seem to be in the public domain (does anyone have a chart?). In the absence of any land or seamounts, I think it’s safe to say the seabed is the Pacific Abyssal Plain... which would put the maximum depth somewhere between 3,000 to 6,000 metres. A lot of water, not much else.

Given this apparent lack of life, it came as a surprise when, in 1997, oceanographers reported one of the loudest underwater sounds ever recorded, apparently coming from the Point Nemo vicinity. Such was the mystery attached to this subsea cacophony, it was dubbed ‘the Bloop’; there was even speculation it was some Lovecraftian sea monster striding its abyssal kingdom. Amid fevered speculation, boffins at the National Oceanic and Atmospheric Administration finally worked out that it was the sound of a giant iceberg fracturing, hundreds of miles away in Antarctica.

There’s another reason to expect odd noises in the otherwise serene Point Nemo neighbourhood: falling space junk. As the area is safely located away from humanity, it has been used for disposal of decommissioned satellites and larger bodies such as the aging International Space Station (ISS). The idea is that space debris planned to re-enter the earth’s atmosphere around Point Nemo is the least likely to land among human habitation. So when the ISS is finally decommissioned, it will be ‘aimed’ to enter the atmosphere and plummet into the Pacific at Point Nemo, its end (possibly) witnessed only by a few passing trevallies.

By that point, its toxic fuels and propellants should all have been burned up in the atmosphere, and the final pieces of debris will settle 4,000 metres below the surface, an artificial reef with a mile-long debris trail, in the middle of nowhere.