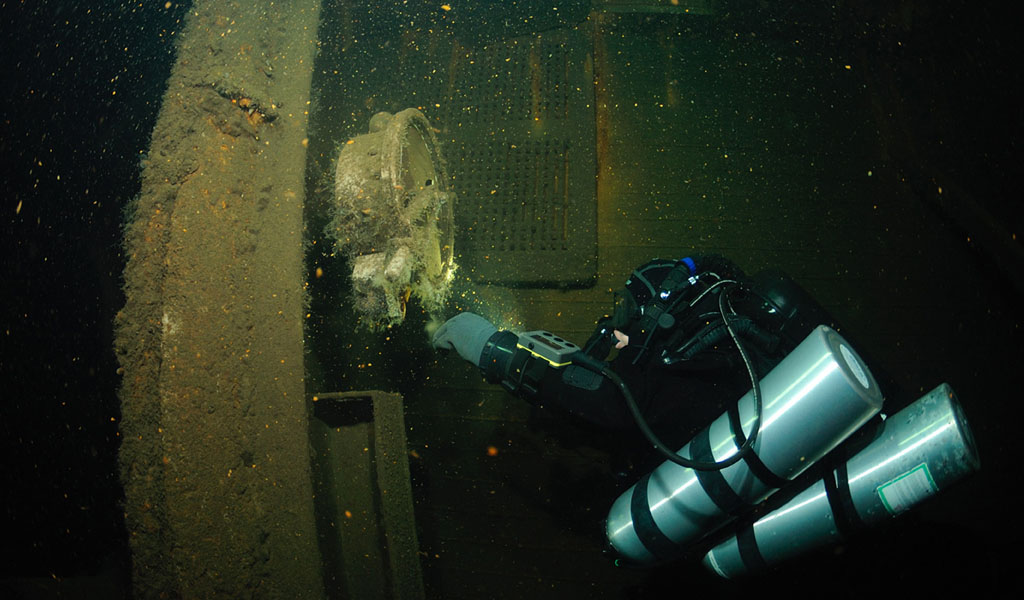 A fictional account by the late John Camm of what he described as his ‘dream dive’: a wartime wreck in the Baltic.

This short story was an entry in the SCUBA shorts writing competition organised by SCUBA magazine. The competition was for short stories inspired by members' time underwater, whether fact or fiction; reportage or rant. Here's John's tale...

I give the thumbs-down signal to my buddy and we drop below the surface. Pausing for a bubble check at six metres, we begin our descent to the wreck below.

The shot line plunges down through the bright green water, disappearing into the haze after a few metres. As we drop lower, the light begins to disappear and the temperature starts to drop. At 20 metres the darkness begins to close in and, at 40 metres, all is completely dark. I turn on my torch and scan the depths for any sign of the wreck. Soon I see a large shadow beneath us and, as we approach, I see it is the wheelhouse of the Steuben.

In life the Steuben was a beautiful, white ocean liner. In death, she is a bleak, lonely hulk strewn with nets lying on her side at a depth of 70 metres at the bottom of the Baltic, a tomb for more than 4,000 refugees.

The wheelhouse is in remarkable condition. The glass windows are still in place, complete with wipers tilted over at an angle and, as we shine our lights inside, we can see the remains of the ship’s steering gear.

Dropping into the promenade deck, we swim aft. With the wreck on her side, the open face of the promenade deck is above us and the wooden deck is to our left. As we swim along, cabin windows appear below us, some of them open. We shine our torches inside and catch glimpses of the carnage within, wooden fixtures and furniture smashed against the inside of the ship and shattered into matchsticks.

Occasionally we see glimpses of the human catastrophe such as a shoe or a human bone. As we swim along the wreck in the cold inky blackness, it’s hard not to think of those who perished here on that freezing night in February 1945 with the end of the war so close you could almost touch it. It’s an uneasy feeling, like being in a haunted house at the dead of night.

Soon our bottom time is almost up and we make our way back to the shot line to begin our slow climb to the surface. Soon this dive will be over, but I know that I have to come back. Steuben is not ready to release its icy grip on me just yet.

We were honoured to receive this entry from John Camm, a veteran of the British diving industry. Not long after sending in his story, John died in July 2020. He had been battling Glioblasoma, a form of brain cancer. We publish this story in tribute to John, and to a life devoted to diving and divers.

The journey through the entries of the SCUBA Shorts writing competition continues. SCUBA still haven’t picked a winner, so these entries are all in the running to win an O'Three 90-Ninety Tri Lam Drysuit worth £1,795.

The winner will receive the much-praised new TriLaminate drysuit from this competition’s official sponsor, Portland’s masters of drysuit diving, O’Three. This is a prestigious, premium quality suit from a respected company with a proven track record in keeping divers warm and dry in the most demanding environments.

Become a member of BSAC today.

Learn to dive (from the comfort of your own home if you like!) or if you're already trained, come diving with us! Either way...we'd love you to join us.

Feature image: Jakob Selbing/Wikipedia. A diver at one of the engine order telegraphs of SS Steuben.