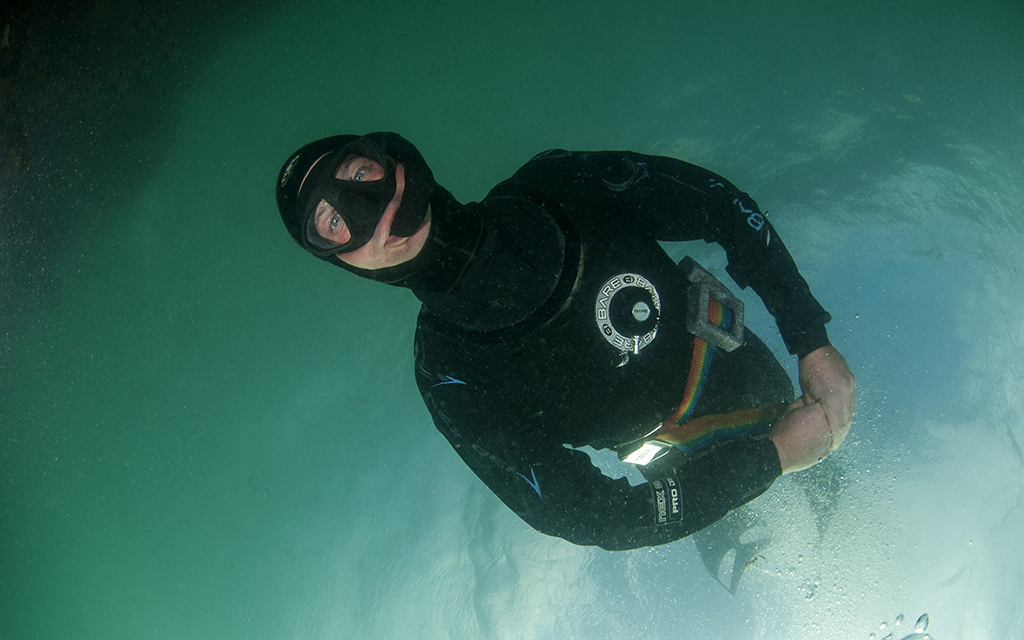 In his quest to explore new snorkelling scenarios, Andy Torbet and family use a pedalo boat to check out an alpine lake.

I've snorkelled from many different forms of transport, RIB and ships, helicopters and kayaks, canoes and rowboats, cycles and cars, paddle boards and motorbikes and even from an iceberg in the Arctic Ocean. However, I never expected to launch myself into the water, snorkel attached, from a pedalo. And, of all places, in a mountain lake.

During the summer holidays I’d taken the family camping in my motorhome to the Alps. Initially to Chamonix with its excellent mountain transport, which allowed us to make use of the mountain railway and numerous connecting cable cars to reach glaciers and mountains up to almost 4,000m above sea level. Not bad with seven- and five-year-old kids in tow. In order to do some reverse decompression on the way home from our high-altitude sojourn, we decided to spend a few days on the banks of Lake Annecy.

Despite being at the foot of the French Alps and fed by rivers and streams from the nearby mountains, Lake Annecy maintains a high temperature in summer and was a shockingly civilised 24°C when we visited in July. What’s more, due to strict environmental regulations dating back to the 1960s, it is known as Europe’s cleanest lake. This made it the perfect place to take young children for a freshwater snorkel. However, the beaches, although not crowded, still did not provide the peace, quiet and isolation I enjoy. But a few hundred metres from the shore would be perfect. Enter the pedalo.

We warmed up to power our new water-chariot. The excellent cycle paths around the lake meant an easy and safe cycle from our campsite to the pedalo place. Personal pedal-power prepared, we hired a 4-seat boat for €20 for an hour. Despite what you may think, and certainly what I assumed, the boat moved relatively easy through the water, made ample progress and was easy to steer. We quickly made our way out of the ‘harbour’ and into the middle of the lake.

Since the air temperature had reached almost 35°C, we were all keen to jump in. The boys, adorned with life jackets, masks and snorkels were straight off the boat while the adults took it in turns to man the helm in order to keep the vessel on station in the face of a gentle breeze blowing us back to shore. Below the surface, the water took on a greenish hue and the visibility was around six metres, presumably because of an algal bloom created by the warmth. By all accounts there are pike, lake trout, carp, bream, char, perch and roach in the lake… but I must concede to seeing none of them. We were visited by numerous large troops of ducks during our cruise, however.

Despite the paucity of sub-aquatic wildlife, it was still a fantastic place to snorkel. The cheap, simple means of transport, the indulgently warm waters and the cleanliness of the location all hit the spot. But it is the surrounding scenery, the fringing cliffs and lower alpine mountains that set the scene and make surfacing as much of the experience as the diving.

I have extolled the ease and simplicity of snorkelling many a time. These factors make it a ‘go anywhere’ activity, compared to conventional diving. This means we’re more likely to have a go, take our kit just in case or even use dive ‘boats’ that would not work with heavy, cylinder-based dive gear. I’d never have taken scuba kit or a rebreather on this trip; so I’d never have gone underwater and we’d never have hired the mighty pedalo. Sometimes flexibility is the key to adventure.

Article by Andy Torbet first published in SCUBA magazine, Issue 130 November 2022. Images in this online version have been substituted from the original images in SCUBA magazine due to usage rights.

#Torbet On The Tube #Snorkelling