Is three a crowd? 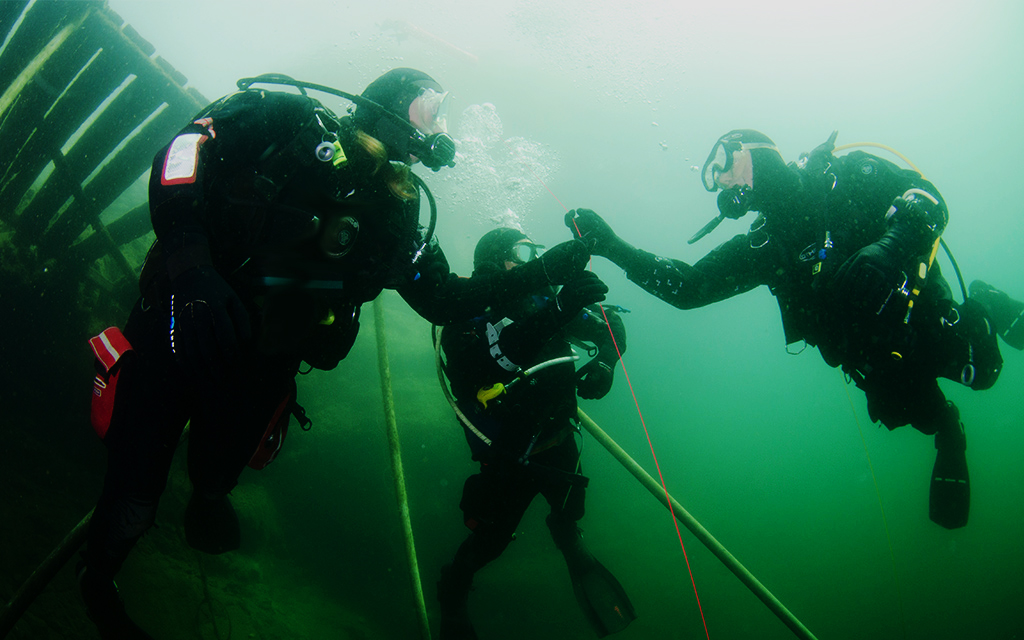 Advanced Instructor and First Class Diver Gordon Procter has some practical advice on diving in a three-way buddy team.

If you ever find yourself talking about diving in a group of three, I’ll bet that it’s one of two conversations. Either, you’re talking about BSAC’s incident report, which every year mentions that diving in groups of three generates problems that don’t exist with traditional pair diving, or it’s about diving at the weekend and you’ve realised that there’s an odd number on the boat, so some of you will be diving in a three. Of those two, let’s be honest, it’s more likely to be the latter (even though the incident report is an interesting and worthwhile read).

Why do it at all?

If diving in a three can generate extra problems – then why would we do it at all? The simple answer is that you can’t have everyone diving in a pair if there’s an odd number on the boat. Your options are to have a group of three or to have someone sit the dive out. You’ll not often get many volunteers to sit a dive out, although I have heard of branches with a blanket ban on diving in threes, so divers draw lots to decide who sits out if there’s an odd number. That’s a bit overzealous for my taste, but I sympathise with the sentiment.

BSAC has recently updated the 'Diving in a Three' section of its Safe Diving guide. The reality of club diving is part of the reason behind that update. Previous versions said things like, “It is very strongly recommended that diving in ‘odd numbers’ be avoided,” but the latest version simply says that diving in pairs is preferable to diving in threes and then gives some useful advice about what to do when diving in a three or a group.

The main difficulty of diving in a three is to be a good buddy to both of your buddies. That means staying together, which can be tricky with the narrow field of view that most masks give you and the typical gloom on a UK dive site. It’s quite easy for your buddies to swim off in opposite directions if they aren’t paying attention. It also means everyone paying attention to what’s going on and being attentive to both their buddies so that you can resolve issues before they become serious. With two buddies, that’s twice as much work as we’re used to.

The first step to avoiding these problems is for the Dive Manager to give some serious thought to who will be asked to dive as a three. Picking relatively experienced divers, who are reliable and all familiar with each other helps to reduce the task loading of keeping tabs on everyone. Beyond that, it’s on the divers themselves to plan the dive and dive the plan.

It’s also worth having a think and a chat beforehand about what flying formation you’re going to adopt. The main thing you’re trying to avoid here is leaving one diver as the 'gooseberry' (on their own, like the third wheel on a date). Allocating roles such as First Diver, Middle Diver and Last Diver mean that you know roughly where you’re expecting to see your buddies. Alternatively, if you’re getting in for a drift then you might want to form a line across the current and agree who’s going to go in the middle of the three (this is a good place for the least experienced diver).

There are some positive aspects to diving in a three, and there is a school of thought that says you’re better off in a three because of them. For example, if you have to deal with any emergencies underwater you’ve got much more spare gas, more spare kit and a second pair of hands available. I can understand this view (particularly on very deep dives where you need masses of bailout to get back to the surface), but in most cases in the UK, I’d rather have one solid buddy than have to keep track of two divers and rely on them both being practised and disciplined at diving in a three.

One of my least favourite lines to hear on a dive site is, “You two dive as a pair and I’ll sort myself out.” While I commend the attempt to discuss the plan before getting in the water, all this plan really does is decide who’s going to be the gooseberry at the beginning of the dive. 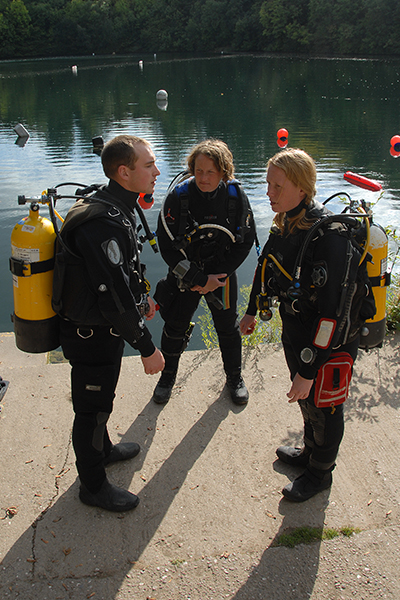 As divers, our next question is always going to be, “Is this an excuse for me to buy some new kit?” A reliable, bright torch with a nice tight beam can help to keep you in touch with your buddies. Agreeing in advance to each hold your torch beams in the view of your buddies can help them to see that you are still there and haven’t swum off.

Obviously, this doesn’t replace properly monitoring your buddy – they might still be there, but having a bad day. Your torch can help here too: draw a circle with your torch in place of an “okay” signal, and use side-to-side or up-and-down motions for “attention” or “not okay”. This makes it easier to check in with your buddies, but it doesn’t replace all the information that you get from actually looking them in the eye. Also, you need to agree this in advance: I know one diver who had a very short, confusing dive because their buddy interpreted a torch circle as “turn around”.

A buddy line is a more robust way to keep in contact with your buddies. You might choose to use this in poor visibility, and maybe only between two of the three to reduce the risk of knitting. On a drift with a dSMB, using your line horizontally as a buddy line between the three of you makes it easy to stay together and in formation.

Similar problems arise when diving in bigger groups. You might have a pair of pairs, who decide to stick together through the dive – maybe one pair who know a site will lead another pair around the good bits.

The risk of the gooseberry is reduced in this case (because you’ve got two buddy pairs), but if you are going to do this you still need to have a good chat through some ‘what if ‘scenarios:

My personal preference is to avoid this situation completely. There’s no need to stick together like this if you’ve got two independent pairs of divers, who each received a good site brief and so know how the site is laid out and where the highlights are.

Diving in a three isn’t just about having an odd number on the boat: instructors often find themselves doing it for good reason. The first thing to think about when diving in a three as an instructor is keeping yourself safe. You are a prime candidate to become the gooseberry of the group. Part of your assessment will be the rescue skills of the students themselves (for example, early Ocean Diver trainees know how to do a controlled buoyant lift but have only done it in the pool). When you are teaching less experienced divers, carrying an independent alternate source of breathing gas for yourself reduces your reliance on your students to rescue you if the need arises. Similarly, you might enlist the help of an experienced diver to act as a safety diver – Assistant Diving Instructors do an excellent job of this, and they are often keen because they get to observe or assist with your lesson.

You also need to make sure that you can see your students and that they can see your demonstrations. Tactics such as agreeing your flying formation in advance, staying close, using a datum line and giving your students a chance to get into formation before you start swimming as a group all really help with this.

If you are teaching rescue skills, then you’ll want to be able to demonstrate on a casualty that isn’t your student, so that they can see clearly, and have your student mimic on a casualty that isn’t you, so that you can remain in control of the lesson. The choreography of your lesson can get a bit involved, so it’s worth thinking this through when you are planning your lesson, to make sure that every student sees a demonstration and then gets to mimic. This is particularly tricky for alternate source lessons where your students need to be both donor and recipient – fortunately, there is some clear advice set out in the updated Ocean Diver Instructor Manual.

Another consideration is how you’ll rescue a student if you need to. There’s a limit to how many you can help at once, after all, you’ve only got two hands, and if you are rescuing one, you need to make sure that your other student is safe too. Adding “one up, all up” to your SEEDS brief is a simple way to help with this.

When I am teaching buddy skills in Ocean Diver and Sports Diver training, I tend to get a better response if the buddy is a diver of similar experience to my students. I think this is because it makes it more real for the student – they realise that they might dive together once they’ve got the qualification, so they need to do a good job of it. Swimming behind and slightly above your students is a nice place for an instructor to be – your students get to behave like a buddy pair and you get a good view of their interactions. It’s worth asking them to check in with you throughout the dive though – so you don’t become a gooseberry that tells them to “dive as a pair and I’ll sort myself out”.

So, diving as a three can be riskier than diving in pairs, but I’m really glad that BSAC has updated its Safe Diving guide to recognise that it is going to happen in branches and give some advice on how to mitigate those risks.