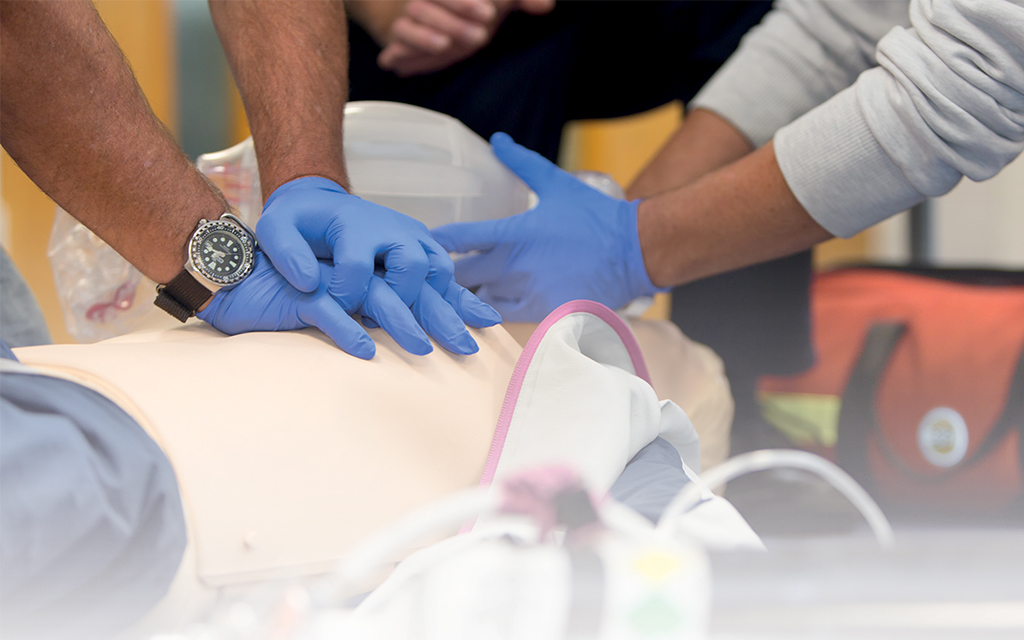 First Class Diver Will Schwarz wanted to offer more support to expeditions, so he decided to train as a Diver Medic Technician. Here’s how he got on...

As a keen diver I always want to keep my knowledge up to date, and more importantly, I enjoy learning new skills. Conducting expeditions in more remote locations has made me realise how essential a team medic is. A basic first aid course along with some rescue training is not going to cut it when you are 24 hours from help.

So, with my eye on a more commercial career path and the aim of working as a member of a team in some far-flung locations, I decided that completing a Diver Medic Technician course would be an excellent addition to my skill set, and would hopefully increase the chances of getting more regular work. The course teaches participants to administer advanced medical aid and to provide life support in the management and treatment of diving casualties while at pressure and during saturation diving operations.

This is an internationally recognised qualification, certified by the International Marine Contractors Association, for a role that is required within the commercial diving sector working offshore. The 60-hour course is spread over 10 days. To keep costs to a minimum, I decided to attend the course as close to home as possible, and with the internationally renowned DDRC on my doorstep in Plymouth, it was an easy decision where to go.

There were 11 of us on the course, from a variety of backgrounds. Two were members of a super-yacht crew, who were there so that they could assist their onboard dive team. Two were members of staff of the DDRC, undergoing the training so that they could become part of the chamber team. One was a recreational diver and one was not a diver but had a desire to learn about being a diver medic to increase their own first aid experience. Five were commercial divers: three working offshore on surface supply work and my housemate and myself as professional Health and Safety Executive (HSE) certified divers furthering our education and skills.

Jon Parlour – Diving Officer of the local BSAC branch, Plymouth Sound Divers – is the Training Officer at DDRC and was our lead instructor for the course. Jon is an exceptionally knowledgeable and skilful diver and chamber supervisor with past roles diving in the Navy and the police.

The first day was, as you would expect, taken up with admin and paperwork, photos and pleasantries. We then had a fantastic review and revision of the body’s systems, which reminded me of A-level biology at school. There was an awful lot I had forgotten. With revision quizzes for homework, the first day went by in a whirl.

Day two was a good review of basic life support and a refresher in the use of automated external defibrillators. Roleplay and practice took up a lot of time, with everyone getting out of breath due to the number of chest compressions they carried out. We moved onto observations: blood pressure using a sphygmomanometer and stethoscope was great fun; not so much for my buddy John, his arm repeatedly went numb while I was trying to listen for his pulse. Being totally squeamish, I did not like having my blood taken for a blood sugar test, despite persuading John to use the smallest needle possible. The following day we practised taking more observations and my ability to hear a pulse increased, John’s arm became less numb and our readings became similar to the electronic ones.

Theory of diving physics was refreshed on day three. We covered the gas laws; the science underlying the work of the DDRC and its hyperbaric chamber, which is such an important place for diver rescue. After a morning of heavy theory, we were all looking forward to an afternoon of airway management – sticking tubes into resuscitation mannequins. Not really a fan of Casualty or any other medical TV series, I had a very vague understanding of getting an airway in position. I perceived it to be very difficult, but how wrong I was. It turns out that modern advances, especially with aids such as an i-gel airway, make it easy to create a working airway on an unconscious casualty.

Will found this to be much easier than he had originally thought it would be, despite having watched very few medical dramas.

Wounds and bleeding were the starters for day four. Lots of blood and gore were the order of the day, and more importantly, learning how to stop bleeding. The use of tourniquets was refreshed along with haemostatic agents, which I’d not used for a long time. Recent developments in wound management have been incredible and with the current low prices, these can be part of any first aid kit, to be used by appropriately qualified individuals.

Decompression illness and neurological examinations were taught alongside medical recompression tables. Being the closest to the doctor instructing meant that I became the guinea pig for this. I was poked and prodded, had my feet tickled and strength tested. It was great fun.

The final day of week one brought shock and burns. Again, not for the faint-hearted. This was followed by drowning and a video about the Bibby Topaz Offshore Incident of 2012, when a North Sea diver lost his umbilical supply and had to revert to his emergency gas supply. He was recovered 45 minutes later, which showed that the systems and procedures do work and also how adept humans are at trying to stay alive, along with just how lucky some people are. This was made into the film Last Breath, recently shown on the BBC and might still be available on iPlayer – a must-see for all divers.

My plans for working in commercial diving were falling by the wayside as my imagination of what could go wrong started taking hold. I thought that the easiest way to get around this was to go diving at the weekend. With a pot dive to six metres planned on Monday, a local shore dive was perfect to remind me why I loved diving and that it was not all doom, gloom and terrible accidents.

Our second week started with a session of taking observations and blood pressure readings in the chamber, in addition to carrying out neurological examinations while at approximately six metres depth. It was surprising how much the bags of intravenous fluid were affected and how simple the steps were to get these back up and running.

We moved onto fluid addition and the use of cannulae. These skills were taught using a model that pumped blood through its veins. This enabled us to practice getting a needle correctly inserted, along with adding medication and other fluids. Intraosseous infusion, directly into the bone marrow, was demonstrated along with the devices used, which all looked like medieval torture tools. However, this is supposed to be less painful than an IV cannula being inserted, which I will choose to believe.

The following day, fractures and back issues were the new topics. We practised fitting neck collars and using spine boards for the evacuation of casualties. Typical of any course, we decided to stretcher the heaviest and biggest individuals. The afternoon saw some excellent practical demonstrations of placing chest drains through a rack of sheep ribs. I was getting hungrier by the second until the next part… the insertion of urinary catheters.

Like everything in DDRC and this course, they try to make the experience as realistic as possible. Without catheterising ourselves, we had the opportunity to use some functional models of both male and female equipment. It was surprisingly easy to carry out and knowing that you would be doing this during an emergency would reduce the awkwardness of the procedure. 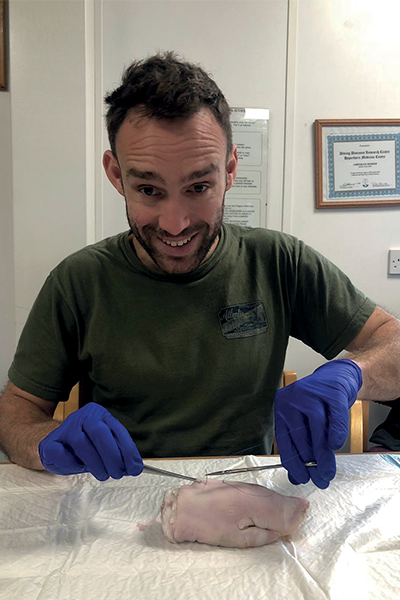 Wednesday started with wound closure. Now I’ve never been good at sewing buttons on and my suturing was going to be equally as poor. A sliced pig’s trotter was presented to each of us and we proceeded to sew up its foot. I was surprised at how easy this was, and feel that even my button sewing skills must have vastly improved.

The administration of drugs, along with their hazards, was taught using saline and an orange. Again, the great thing about this course was how practical it was and that DDRC made every effort to give us models when we couldn’t practise on each other.

The afternoon featured incident scenarios based on diving accidents; a neurological bend in our case, for which the casualty needed to be assessed, evacuated and placed into the chamber.

The penultimate day started with a presentation on saturation diving and rescues. This was fascinating and the medical facilities in a saturation chamber are incredible. Again, it was easy to realise how dangerous things can be underwater and when they go wrong how horribly wrong they can go. Thankfully, saturation diving does have a very good safety record. We discussed various hazards such as contaminated water and hazardous marine life.

The afternoon involved dealing with multi-casualty scenarios, which entailed casualties that needed to be assessed, first aid provided and evacuated from the area. We were all working as a team and it was good to see how the lessons we had learned over the past week and a half were coming together.

The final day saw us sit a 50-question exam with proper written answers, not all multiple-choice. This was followed by practical assessments of basic life support, secondary surveys and bandaging. It was a great relief to find out that we had passed even though, like in any exam, the most important thing to do turned out to be to read the questions properly.

Having a Diver Medic Technician and Offshore First Aid ticket will hopefully provide me with more opportunities for work. It has vastly improved my first aid skills and I would suggest that anyone conducting remote expedition diving would really benefit from this course. As a minimum, at least two in an expedition team should have this qualification. It was an excellent course and the staff and the facilities were exceptional.