The heart and Patent Foramen Ovale (PFO) | Anatomy of a diver 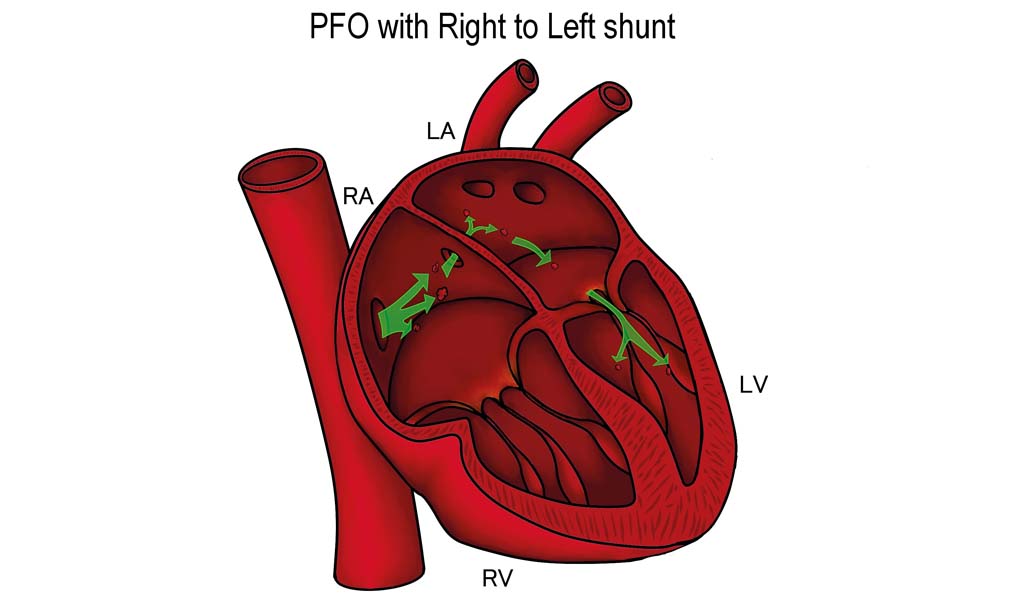 My dive buddy has been told they have a Patent Foramen Ovale (PFO), what does this mean? Do they have to stop diving?

This is an increasingly common question, as more of the diving community become aware of PFOs. So what exactly are they? To answer that question, we first have to think about how the adult heart works.

Deoxygenated blood from the tissues enters the right atrium and flows through the right ventricle in order to get to the lungs. While in the lungs, carbon dioxide is removed from the blood in exchange for oxygen before returning to the left atrium, to be pumped out to the body by the left ventricle.

When divers ascend from depth, inert gas that has dissolved in our blood comes back out of solution forming bubbles. These bubbles are removed as part of the waste gases by the lungs so that they do not return back to the body – this is referred to as the pulmonary filter.

The foramen ovale (foramen means hole; ovale means oval) is a connection which allows deoxygenated blood to flow from the right atrium straight into the left atrium without going to the lungs. It is a remnant of when a baby is in the mother’s womb designed to bypass the lungs while they are developing. At birth, blood gets diverted to the lungs rather than going through the foramen ovale. This causes the hole to close and over time it fuses shut.

However, in the case of a PFO, that communication between the right and left atrium remains open longer than it should. This allows blood to bypass the lungs under certain conditions.

So why does this matter?

Up to a quarter of the population have a PFO of some size and may not know anything about it, however, only 1 in 20 people have a significantly large PFO. There is also an association between those who suffer migraine with aura (neurological symptoms preceding the migraine, such as visual disturbances) with up to a third of those having a PFO. We are particularly worried in divers because of the risk that bubbles, instead of being filtered out by the lungs, could go through the hole and into the left side of the heart where they are pumped back round to the tissues. This mechanism puts the diver at a higher risk of neurological, inner ear and skin bends.

When someone suffers a bend that is compatible with this mechanism, they are advised to have a PFO check. This is an ultrasound of the heart where small amounts of bubbles are injected into the blood to try to visualise the defect. If a PFO is found then there are often three options of what to do:

1. Get the PFO fixed

A device is inserted into a blood vessel, often starting at the wrist and is advanced up to the heart. This device is then expanded to block the hole. Unfortunately, this is often not funded by the NHS and can be quite expensive. If the procedure is successful then the diver could return to diving without restrictions.

2. Continue diving without closure but with restrictions

These restrictions aim to minimise bubble load and reduce the chance of getting decompression sickness – an example would be no-decompression diving, one dive per day and a maximum depth of 15m.

After their bend, some people find that the enjoyment they get from diving - or the restrictions set - are not worth the risk so cease diving.

So if your buddy has a PFO, it doesn’t mean you can’t go diving together! If they don’t plan to get it fixed, after discussion with a diving doctor, just plan your dives to be safe for both of you.

This Anatomy of a diver column was originally published in SCUBA magazine, Issue 100 March 2020. For more membership benefits, visit bsac.com/benefits.