Ear problems | Anatomy of a diver 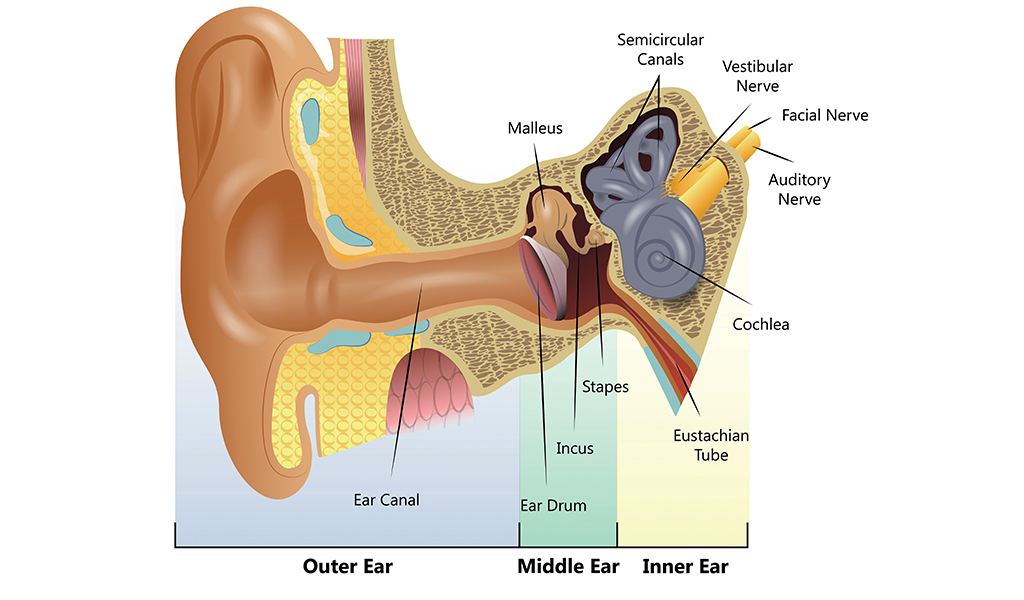 This is a topic we're frequently asked about, so listen up! We'll start with anatomy and function.

The ears can be split into three zones:

During descent, air in the middle ear is compressed, pulling the drum inwards. Divers must equalise the middle ear to ambient pressure or risk running into trouble. Most divers 'clear' their ears using a Valsalva manoeuvre, the traditional 'pinch and blow'. This forces air from the nasal cavity along the Eustachian tube into the middle ear.

Difficulty equalising causes discomfort, progressing to sharp pain in the affected ear(s). Equalising regularly on descent will help prevent issues. If you experience any discomfort, stop and ascend half a metre then try to equalise again. If you still cannot equalise, you should abort the dive. Descending further without equalising causes the Eustachian tube to be sucked closed, making equalisation impossible and risking barotrauma.

Problems are more common if the Eustachian tube has been sitting inactive. Gently clearing your ears a couple of times a day in the run-up to a dive will exercise your tubes and ensure they're fit to dive. Alternatively, you can try an 'Otovent' device, but this is best used in private.

Can I dive with a cold?

The common cold is a viral illness of the upper respiratory tract (there's no place for antibiotics here). This causes inflammation and narrowing of the Eustachian tubes with increased mucus production and makes equalising difficult, if not impossible. Forceful Valsalvas may damage the eardrum and can inadvertently push mucus up the tube instead of air. The result? A sense of fullness in the ear, reduced hearing, and increased risk of infection. As the infection resolves, so should the dysfunction and you can happily return to diving bliss.

Most decongestants work by constricting blood vessels in the nose and sinuses; reducing inflammation and mucus production. Traditionally, divers have been warned against their use, the fear being that they may wear off while underwater and cause a reverse block on ascent.

Many decongestants are now available as extended-release preparations, acting for up to 12 hours. If you're going to use one of these, our advice would be to take it approximately one hour before diving.

Alternatively, topical agents applied directly into the nose, such as Otrivine, may be used before each dive. It is important to note that the effectiveness of these agents rapidly diminishes with prolonged use, which should be limited to 72 hours. In fact, use beyond this limit produces an opposing effect making symptoms worse.

Descending without equalising will result in barotrauma to one or both ears. It can also occur on ascent (a reverse block). Most commonly the eardrum is injured, termed Middle Ear Barotrauma. The degree of injury varies from inflammation and bleeding into the middle ear, to perforation of the drum.

A rapid descent with no equalisation, or a reverse block during an uncontrolled ascent, will generate a large pressure difference. This can damage the oval or round windows, known as Inner Ear Barotrauma. The symptoms are similar, but more severe, to those of Middle Ear Barotrauma. If you are experiencing ear pain only, it is likely you have Middle Ear Barotrauma, and you should see your GP. If you have any other symptoms you should contact a diving doctor who will be able to advise appropriately.

This Anatomy of a diver column was originally published in SCUBA magazine, Issue 99 February 2020. For more membership benefits, visit bsac.com/benefits.